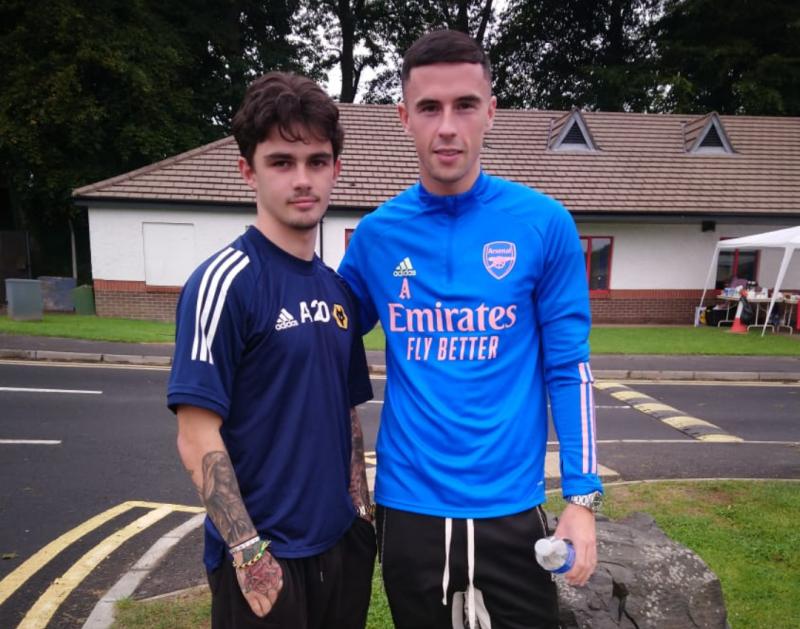 Lee Harkin (left) with Jordan McEneff on a recent visit to Derry.

The 18-year-old, who joined Wolves from Derry City back in 2019 has really made a mark at Molineaux and has been rewarded with the new deal, which also carries the option of a further 12 months.

The former Tristar youngster is capable of playing across the front line and has impressed for James Colllins’ U23 side this season when leading the line, hitting a brace in a 4-0 victory in the Black Country derby against West Bromwich Albion last month.

The teenager has shown determination to return from an early season injury, and has shone as a central striker this term, helping the under-23s to the top end of the Premier League 2 and the semi-finals on the Premier League Cup.

Technical director Scott Sellars said: “Lee’s had a good year. He worked hard coming back from injury to get back into the team, he’s performed really well, and we’ve been pleased with his attitude. He’s full of energy, trying to do the right thing, and in the last few weeks he’s met the challenge we set for goals.

“Since he’s been here, he’s been a solid and consistent player, having come with a good reputation, and we’re pleased. There’s always a step up to the under-23s and he’s done that as a first-year pro, so has set a good standard for himself.

“He’s played a lot as a winger, but we’ve played him more as a striker this year. We’ve seen him develop and grow – he’s a really hard-working kid, who commits every day, and he’s getting his rewards.”

Harkin’s success has become motivational for other young players already at the club and those interested in making a career from the game according to Sellars.

“We’re always looking at every opportunity, and Lee’s move was before Brexit,” he explained. “He had a lot of options, but how we work as a club, and how we take care of people, were some of the reasons why Lee came and we’re delighted he’s stayed.

“Lee’s versatile, which is great. In our style of play, inside wingers are very important, and he can do that as well as play down the middle, which is going to benefit him in the long term and present more opportunities.”