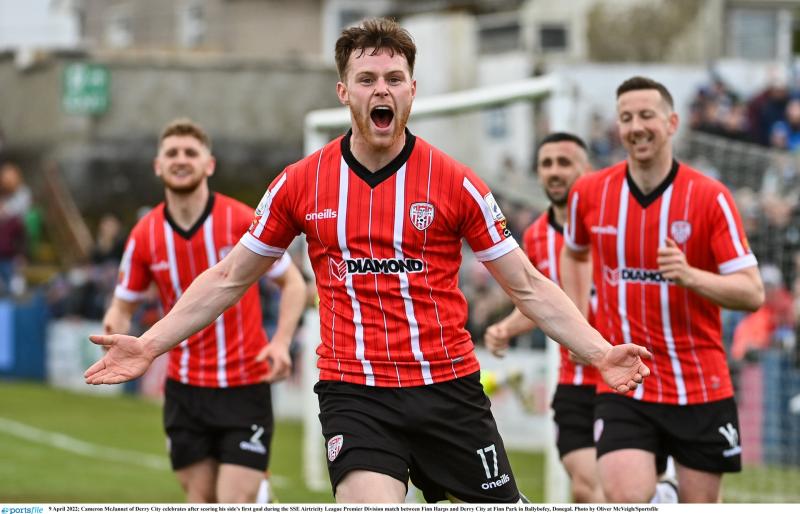 Another magical moment from Will Patching earned Derry City a hugely important victory at Finn Harps.

Patching’s 88th minute free kick, his fifth goal of the season, added to Cameron McJannet’s earlier goal, and send the Candystripes back to six points clear at the top of the table.

The finale was much nervier than it should have been however with Filip Mihaljevic’s late penalty ensuring a nail-biting finale.

Overall it was a hard fought, but deserved victory for Derry City.

The opening goal came on 22 minutes. Brandon Kavanagh’s corner was met by a bullet header from Cameron McJannett who gave McGinley no chance from close range to make it 1-0.

Harps were immediately onto the attack in response and they could have equalised when Ryan Rainey’s low cross found Mahdy 10 yards out but under pressure, the striker fired over the bar.

Derry City set-plays were causing real problems for Harps with Will Patching curling the ball just wide from a poor clearance before Danny Lafferty prodded wide from close range five minutes before half time. Kavanagh’s deliveries were superb and Lafferty really should have scored, his reaction – holding his head in his hands – telling its own story.

City were struggling to keep their foot on the ball in the second half and that was playing into Harps’ hands as the home side tested their opponents’ durability with numerous free kicks and long throws into the area. Ethan Boyle’s log throws were a real challenge and it was from this that the home side very nearly equalised, the ball falling into a crowd and landing at the feet of Ryan Rainey who shot just wide from close range on 68 minutes.

Harps came even closer just four minutes later when Barry McNamee floated a cross into the area and David Webster met the ball with a looping header which sailed over the retreating Maher but hit the top of the crossbar and went behind for a goal kick.

The introductions of Joe Thomson and James Akintunde gave Derry more steel in midfield and attack, and Derry regained control.

The game looked to be over when Akintund won a free kick 20 yards from goal and Patching swept a beautiful effort into the top corner to make it 2-0.

There was still time for late drama however as McJannet fouled Mihaljevic for a late penalty and the striker sent it down the middle of the goal to make it 2-1.

Harps pushed for an equaliser, but Derry City held on to make it nine games unbeaten this season.