'Finn Harps are in a false position' 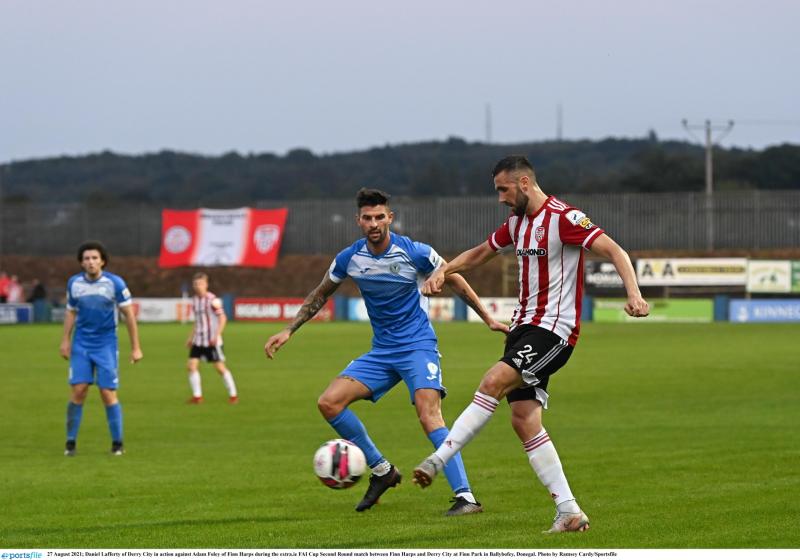 Danny Lafferty knows full well what the Northwest derby means but he has warned Derry City fans that form counts for nothing on occasions such as this.

The Candystripes are strong favourites heading into today’s game at Finn Park, as they sit three points clear at the top of the Premier Division, unbeaten after 8 games. That is in stark contrast to Harps, who are second bottom with just one win from eight. But Lafferty, who saw first-hand how City struggled against Harps last year, knows it all counts for nothing in derby games.

“Form and league position go out the window in these kinds of games,” he insisted. “They are possibly sitting in a false position in the league at the minute only for the Drogheda keeper making two great saves (in Monday’s 2-2 draw), otherwise they would have won the game. We’re expecting a very difficult game and in these derby games it’s the team that handles the occasion the best and perform on the night who will get the rewards and hopefully that’s us.”

City have won just once in their past seven meetings with Harps, including two defeats last season, and Lafferty believes that despite their struggles so far, the Ballybofey side have become a different force under Ollie Horgan.

“Without doubt it’s extremely difficult historically,” he agreed. “In the last couple of games, it has been even more difficult. Ollie Horgan knows exactly what the Northwest derby is all about. He has them set up to play a certain way and you could say that they have a real identity and they know what they are to make it difficult.

“We have a lot more local boys now who would understand what a Northwest derby means so we’ll obviously be looking to build on the two away wins we’ve had over the last couple of days. Going down there we know it will be a very difficult game on a very difficult pitch against a very well organised Finn Harps team. We know there will be a good away support coming down also so we’re hoping to get them behind us and hopefully get another three points, but we’re under no illusions that it’s going to be very, very difficult.”

While Lafferty is thrilled at Derry City’s impressive start to the new season, he knows how quickly that can change in a demanding Premier Division.

“It’s been an excellent start, but that’s all it is, a start,” he warned. “We’re not even 25% of the way through the season yet. There’s a long way to go and there will be a lot of ups and downs because things like that happen throughout a season.

“We’ve started well, it’s positive and it’s great the feeling around the club. The boys are enjoying it and we have had some great results in terms of late goals which makes it a bit extra special, but we’ve only played eight games.”