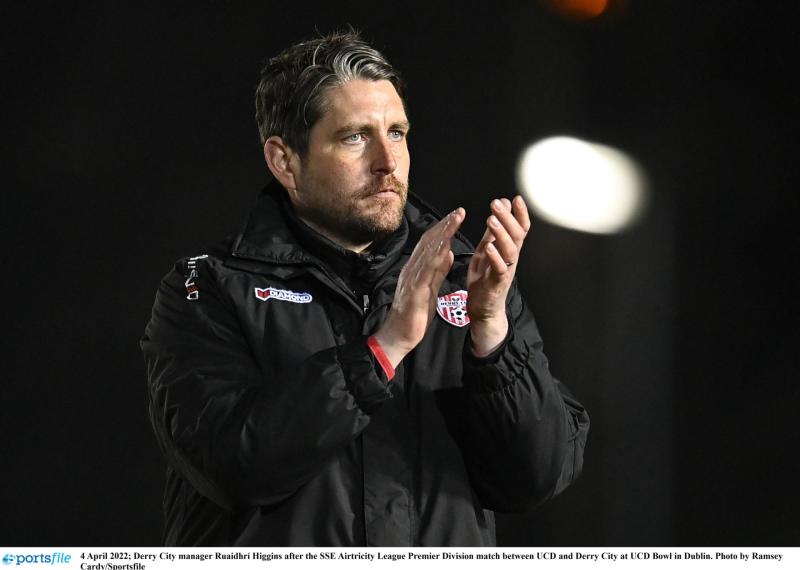 Derry City manager Ruaidhri Higgins has led his team to the top of the Premier Division.

The Harps boss stated earlier this week that there is once again a significant gap between the teams with Derry City big favourites to win. The league record so far this season supports that claim with Harps winning just once in eight games, while the Candystripes are three points clear at the top of the Premier Division. But Higgins disagrees completely.

“They are a good side and Ollie is a brilliant manager who works extremely hard. He always has Harps well set up so we will need to be at our best to win it,” he insisted.

“There’s no doubt that Harps have improved over the years under Ollie. I remember they had an absolutely brilliant start to the season last year, so there’s no doubt they will go on a run. Ollie is obviously playing it down, but there’s no chance Ollie doesn’t believe that they can beat us in Ballybofey – of course he believes it. He’s obviously going to downplay it, but we just need to go there with the right mindset and the professionalism that we have shown and try and put in a big performance to send our supporters home happy. That’s all I care about; we just want to try and pick up another three points and move on.”

While Derry City’s attacking players have taken most of the plaudits so far, the team’s defensive record has also improved significantly, with the 2-0 win over UCD the fourth clean sheet in eight games. Under Higgins last year, it took 17 games to reach that total.

“Attacking players always get the plaudits and rightly so, but there’s a lot goes on behind that,” he said. “I think you can see the real leadership qualities and the quality as footballers; Dummigan has slotted into that holding midfield role absolutely brilliantly which was never in doubt because he’s an exceptional footballer.

“Everyone who has played their part defensively – you have Boyce, Toal, McJannett, McEleney, Coll, Lafferty – they have all had really good starts to the season. Some have played more than others but we’re delighted with them all. They are all playing with confidence and we just need to keep that momentum going and try and pick up as many points as we can.”

A huge plus for City this season in particular has been the presence of Shane McEleney in defence. McEleney returns to the club he spent two years with today, and for Higgins he has been one of the biggest positives to date.

“He's been excellent,” he agreed. “He has added a new dimension to the team. He’s a very talented footballer but he has also improved defensively as the years have gone by. Once we got his physical conditioning to the level that we wanted he was always going to have a really good impact on our season.

“Hopefully he continues to knuckle down and continues to work as hard as he has worked and keeps the form going because he has developed into a real leader as well. He has excellent communication skills; when he speaks it makes sense and he is respected in the dressing room by both the players and the staff, so he needs to keep his level of professionalism and his level of performance on and off the pitch up as well. We’re delighted with him and long may that continue.”

Higgins has plenty of experience dealing with derby games as a player over the years, and he admits that his role as a manger makes him look at the game in a different light.

“We’re in football because we love it and it’s an emotional game and you try to keep your emotions in check as best you can. There’s definitely a wee added spice whenever it’s a local derby but we’ll prepare for it like we do any other game and we’re looking forward to it because there should be a big crowd from Derry getting behind the team.”

The Candystripes have been creating big headlines already this season, but there is zero chance of the manager looking too far ahead with so many games still to play.

“I’m not playing anything down, I’m just realistic,” he concluded. “We’re just 8 games into a 36-game season. It’s been a very good start and the players and the staff have been excellent. Everyone is working really hard and pulling in the one direction. It’s been a good start but that’s all it is and we’re just focusing on the next game and trying to get three points.”