City eventually get the job done against stubborn opponent 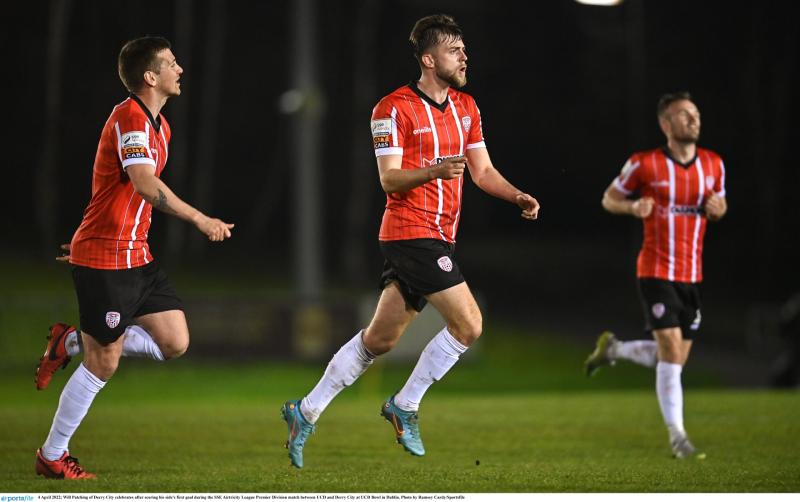 Will Patching celebrates after putting Derry City a goal up against UCD. Picture by Ramsey Cardy/ Sportsfile

Derry City are six points clear at the top of the Premier Division after goals from Will Patching and Ronan Boyce saw them comfortably beat UCD in Dublin.

It was an exercise in patience for the Candystripes this evening as UCD dug in and proved a stubborn opponent, with City denied by the woodwork three times before eventually making the breakthrough.

Cameron Dummigan came so, so close to scoring his first Derry City goal early on when he lined a shot up from 25 yards and saw it hit the frame of the goal thanks to a vital fingertip save from Healy.

There was nothing that the UCD goalkeeper could do just seconds later however, as the UCD defence was split open by Brandon Kavanagh who sent McGonigle through on goal, but unusually the striker got his finish wrong, with the ball bobbling the wrong side of the post.

It was quickly becoming one-sided as Derry stamped their authority on the game, and the woodwork denied them for a second time on 25 minutes when McGonigle set up Brandon Kavanagh who flicked the ball up on his left foot and sent an outrageous dipping volley over Healy, only for the ball to bounce away off the crossbar.

Derry City were straight onto the front foot at the start of the second half and it wasn’t long before they had struck the woodwork for a third time, this time Will Patching coming close after cutting in from the left wing.

The hour came and went without the breakthrough and Derry City’s frustration only increased when Eoin Toal headed into the net from Will Patching’s corner, only for the goal to be ruled out for offside, much to the annoyance of Ruaidhri Higgins.

The City manager’s annoyance quickly faded however as Derry City finally took the lead on 67 minutes. Jamie McGonigle was fouled by Eric Yoro just over 20 yards from goal and that gave Will Patching the chance to have a strike at goal, and the midfielder made it look so easy as he swept the ball past Healy and into the net for his fourth goal of the season.

The second goal quickly followed as Derry City made sure of the three points, and it was so simple for Ronan Boyce who had a simple tap in when Camron McJannet’s low cross went all the way through the UCD defence to the unmarked City player at the back post.