'We'll not lie down for anyone!' - Derry City ready for UCD 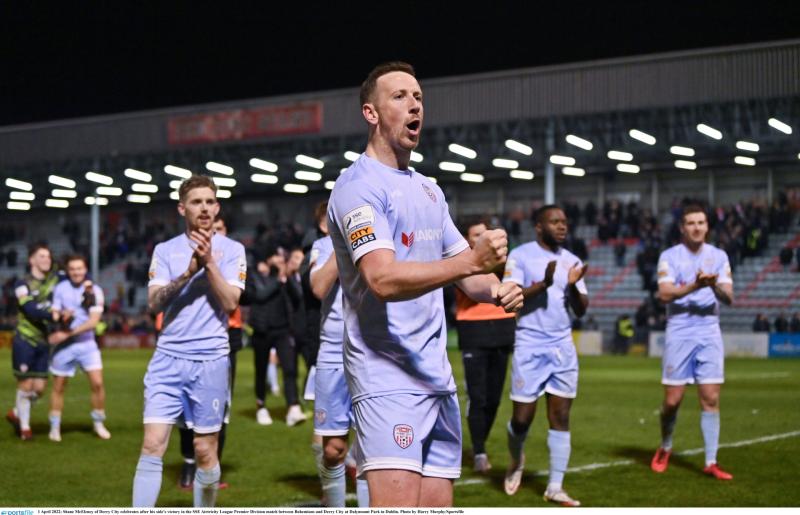 Shane McEleney has hailed the togetherness in the squad as Derry City look to go six points clear at the top of the Premier Division with victory over UCD this evening.

The 31-year-old returned to the Brandywell this season, and has won and kept his place in recent weeks as the Candystripes have chalked up four successive league wins to take them top of the table.

James Akintunde’s last-gasp winner at Bohemians on Friday night made it five wins from seven games this season, and the third time that Ruaidhri Higgins’ team have scored injury time winners against their opponents. McEleney puts those strong finishes down to the spirit in the squad at present.

“It's togetherness at the end of the day,” he said. “We’ll not lie down. There’s good drive there and there’s good fitness there and I think you could see that in the last seven or eight minutes. It’s a testament to us and a testament to the staff, because of the good pre-season that we’ve had.

“It was a great away performance. We came out in the second half having gone a goal down and I think we were the only team that looked like we were going to win the game. It’s credit to everybody again. There’s a lot of good qualities in the dressing room as you can see. That’s our third 90th plus minute winner so long may the run continue. It’s another one knocked off.”

It didn’t look like things were going Derry City’s way until a number of key second half substitutions helped turn the game around. The introductions of Patrick McEleney, Matty Smith and match-winner James Akintunde were all key according to McEleney.

“We’re all in this together,” he emphasised. “It’s a credit to the staff as well making good substitutions. That’s why they get paid the big money. It’s a great header from James and we’re all delighted for him, and Matty Smith too, having him and Fats back, you could see it was a breath of fresh air for us. We’ll take a lot of confidence from it. This isn’t an easy place to go to for any team. It’s a quick turnaround for Monday now but we’re looking forward to it.”

‘One game at a time’

Friday’s game at Dalymount Park was the first of three successive away games for Higgins and his players and McEleney revealed it’s 100% focus on the next game only.

“We came into the Bohs game and we didn’t have the UCD game on our minds at all,” he added. “That’s a mindset that we need to have, we have to take every game as it comes. We can look forward to Monday now and take a bit of confidence from an away win. We are going to UCD and we know they are going to have young players who will be fresh and energetic, so we have to go down there and be as fresh as possible and try and get another three points on the board.”

Shelbourne’s win at Sligo Rovers on Friday night again showed that nothing can be taken for granted this season, as the experienced McEleney already knows.

“If you take your eye off the ball or go into it with too much confidence or start smelling ourselves you could slip up,” he agreed. “But I don’t think we have that in this group. I know we’re only seven games in now but I don’t see that. It’s great to be a part of and long may it continue. I’m delighted to get in and get my chance. Over the course of pre-season, I worked really hard and I’m happy where I’m at now at the minute personally. We’re just all looking forward to Monday and hopefully we can go and tick another one off the board.”