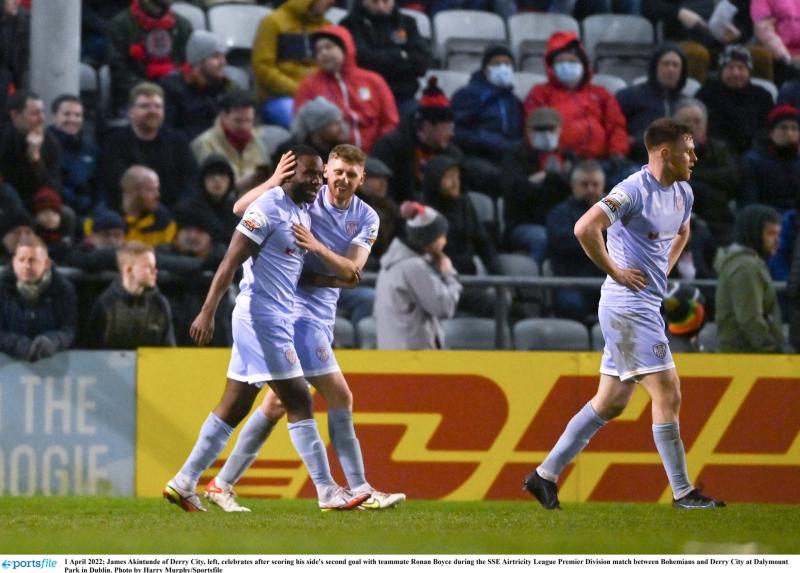 James Akintunde admits he just loves playing at Dalymount Park after scoring his third goal in three seasons there on Friday night.

The forward came off the bench to hit a 93rd minute winner against Bohs to keep Derry City clear at the top of the Premier Division. Akintunde scored a 91st minute goal at the same ground last season, but that was overshadowed by Georgie Kelly’s spectacular 96th minute leveller in an incredible 3-3 draw.

This time though, Akintunde stole all the headlines with his first goal of the season to win the game for Derry City.

“I don’t know what goes on because literally every time I play here I just seem to get a goal,” he said. “With my past record I was hoping a chance would fall my way and it did. I’m happy to get off the mark but overall it’s all about the team and it’s a good result so we just need to keep playing how we’re playing and hopefully keep getting wins.”

“It just shows the mentality of the team that we go all the way to the final whistle,” he said. “It’s all credit to the boys and the manager and the fans that are backing the team because they give us that extra push. Once you get a late goal, as we know from last season when we got quite a few late goals, that spirit and mentality has just carried on into this season.”

Derry City head to UCD tomorrow night and Akintunde believes the win at Bohs will be a huge boost to the players ahead of another trip to Dublin.

“There are a lot of games coming thick and fast so we just have to make sure that we prepare right,” he stated. “We have a lot of decent players who can score goals and whenever you get a goal it’s always nice so I was just happy to get on the pitch and score.”

After the victory at Dalymount, City boss Ruaidhri Higgins joked that he hadn’t even seen Akintunde score a header in training, a statement which the forward agreed with.

“I’m known as 50p head because when I head the ball it, it goes all over the place,” he laughed. “It was nice to get a good header and it managed to go in so I was absolutely buzzing about that.”