Three massive points for Derry City on the road 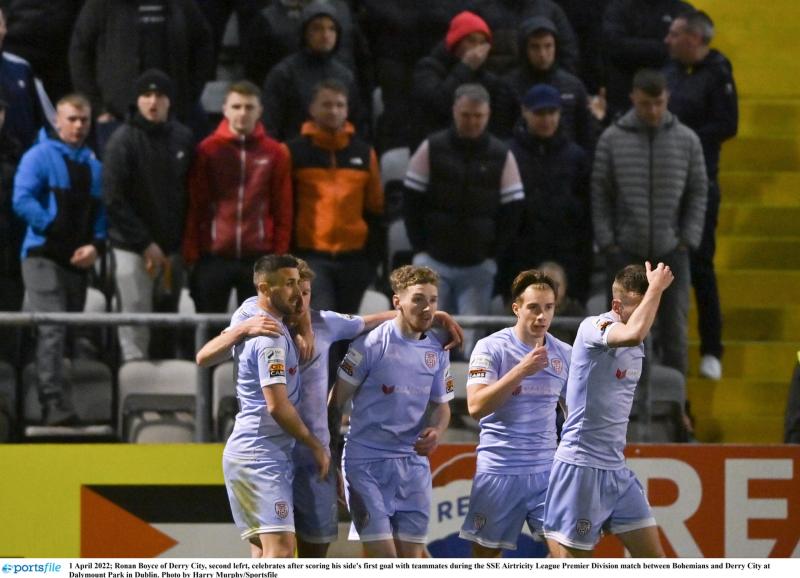 The second half substitute got on the end of Patrick McEleney’s free kick to head past James Talbot and win the game for his team at the end of a fascinating contest, which saw the visitor come from behind to win.

For so long it looked as if it wouldn’t be Derry City’s night as Bohs started strongly and took a deserved lead.

The opening goal came on 25 minutes and it was very well worked. Jordan Flores started the move by finding space in midfield and Liam Burt and Ali Coote combined to open up the Derry defence, with Burt taking advantage of a slip from Eoin Toal before he slotted the ball past Brian Maher from close range to make it 1-0.

It was a difficult spell for Derry, but they eventually regained their composure and finished the first half enjoying their best spell of the game. They began to dominate possession for the first time and almost found an equaliser as a result, with James Talbot producing a brilliant save to deny Jamie McGonigle, whose left-footed effort from 20 yards was headed towards the bottom corner until Talbot tipped it around the post.

Ruaidhri Higgins made big changes in a bid to shake up his apathetic team and immediately Derry City looked more attacking and the manager’s changes made an impact with his team finding the equaliser. A cross into the area was too long for McGonigle but perfect for Ronan Boyce who headed past Talbot from close range for his first goal of the season.

It was Derry City in control after that and despite Keith Long making changes from his bench, it was the visitors who looked more threatening. Yet for Derry’s improved play it was a bizarre sequence of events which almost saw Derry take the lead as an attempted block on McGonigle as he approached goal saw the ball deflect off Rory Feely and over the head of James Talbot, before the goalkeeper got back just in time to claw the ball away before it crossed the line.

It looked like both teams would have to share a point, until Akintunde picked the perfect time to score his first goal of the season.