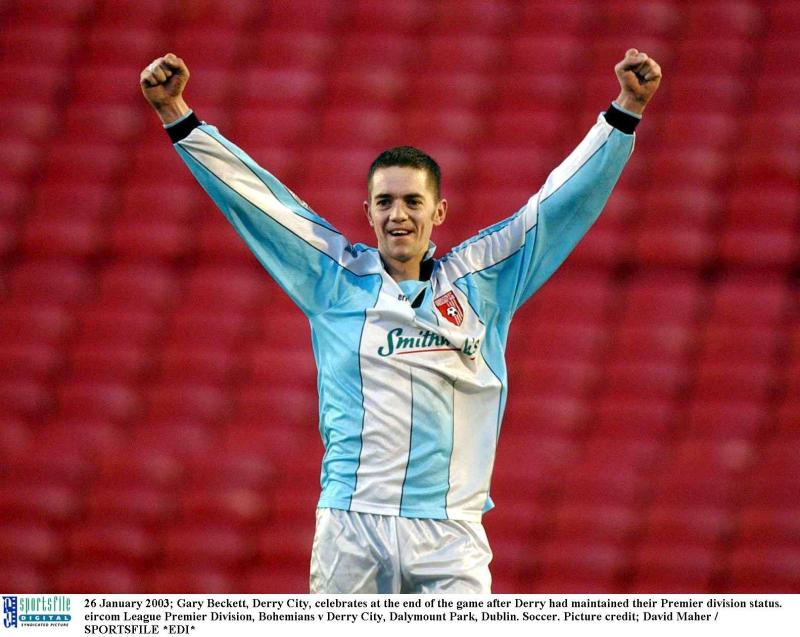 There have been some memorable games between Derry City and Bohemians at Dalymount Park, and the final day of the 2002/3 season is certainly up there in terms of drama.

Despite winning the FAI Cup in the last season before summer football was introduced to the League of Ireland, City's league form was poor and with just four wins in the 14 league games following the cup win over Shamrock Rovers, the Candystripes were in desperate relegation trouble...

The final day of the 2002/3 League of Ireland season promised to be dramatic, with any one of Derry City, Drogheda United or UCD capable of finishing in the relegation play-off spot. The City fans worried themselves through several different permutations, but one thing was clear – a victory for their team and the rest would fade into insignificance.

While the pressure was off Bohs, who had already secured the league title, it remained one of the most difficult obstacles that Derry could have faced, and it became even more treacherous when the hosts were awarded a highly contentious penalty midway through the first half.

With the ball bouncing around in the City penalty area, referee John McDermott stopped played and, to the surprise of even the Bohemians players, pointed to the penalty spot. After prolonged protestations, Simon Webb gave the champions the lead, and Derry were headed for the play-off.

Rather than hope for a favour from elsewhere, the Candy Stripes came out all guns blazing in the second half, and, showing tremendous character against the odds, turned the game, and their fortunes, completely on their head.

Just over ten minutes into the second half, the game was level when Tommy McCallion’s cross was brilliantly headed in by Sean Friars, who directed the ball past Bohs goalkeeper Ashley Bayes from close range.

With the wind now at their backs and confidence coursing through their veins, Derry then took the lead just nine minutes later when Gary Beckett, in only his second game in three months, squeezed the ball under Bayes from a tight angle, and the City fans were in raptures.

However, the celebrations were cut short just four minutes later when Jason McGuinness made it 2-2, and the remainder of the game was nothing but agony for the City supporters as a result. The fans who made the trip to Dalymount Park listened anxiously for any news from Drogheda, who were being held 0-0 by St. Patrick’s Athletic.

The minutes ticked by, and City fans lived on their nerves, until finally, the final whistle went at both grounds. With Drogheda failing to break through against St. Pat’s, the point against Bohemians was good enough, and Derry City were safe. The Candy Stripes finished just one point above the relegation play-off spot in eighth place, but one point was good enough and the fans celebrated with relief as much as joy.

“It was the last game of the season and we clapped Bohemians out onto the pitch,” Eddie McCallion recalled. “They had nothing to lose but we had everything to lose. We were behind, then we were winning and we ended up drawing. We just didn’t know what was happening. It was just relief when we realised afterwards that we were safe. We stayed up but our league position was poor and we realised we had let ourselves down because, as a team, we definitely had more to give.”