Derry Greyhounds: Sniper Ria propels herself into the history books 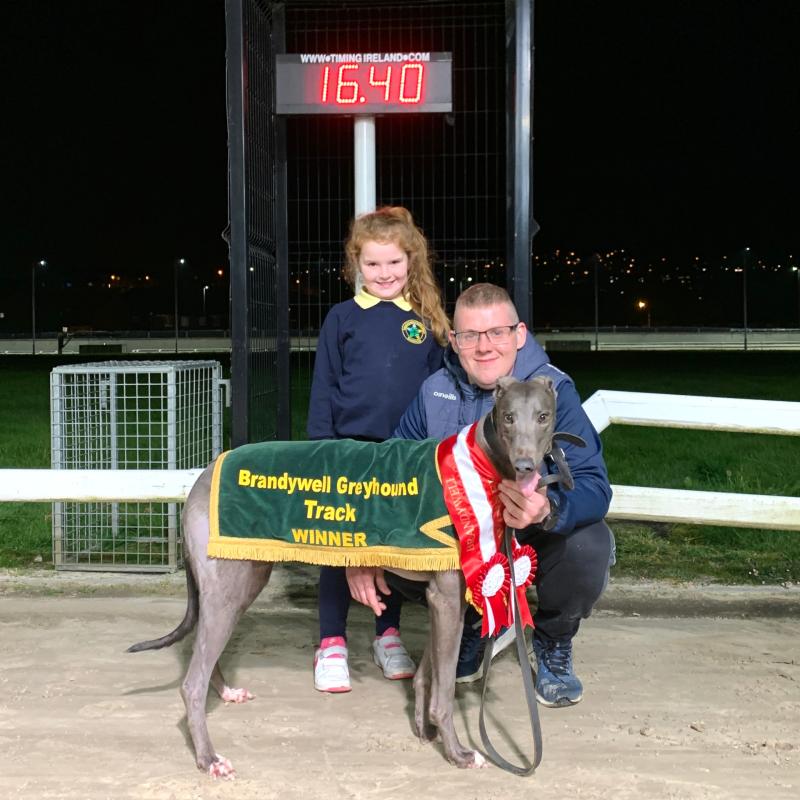 We saw some top quality performances at Monday evening’s race meeting in the Brandywell and the very best performance was kept until the last race.

It is over 2 years since Sniper Ria (Ela Ela Genie x Glenbowen Jewel, Oct ’18) first went into our notebooks when she recorded 16.63 at Brandywell on only her third career start.

She has proven that at 3.5 years old she is just reaching her peak after a sensational record breaking performance which stopped the clock in a sizzling 16.40 in the Support Your Local Track Sprint for owner Kevin O’Kane. All credit to the O’Kane family at Sniper Kennels who have cared for and trained Ria since she was a young puppy. She deservedly now has the sprint track record to add to her 8 career wins.

Most other weeks, Mineola King (Laughil Blake x Throw The Dice, May ’19) would have made the headlines after he made it an incredible 5 wins from 5 races at Brandywell. He rocketed from trap 6 in the Go Greyhound Racing 500 for Paul McFadden and created an unassailable lead. Whispers of a fastest ever sectional time were heard and he stayed on well to record 27.54 which was a career best for him. King is currently joint top of the leader board for ‘Dog With Most Wins 2022’ at Brandywell.

Olwinn Dasher (Heisman x Rough Stosur, Sep ’20) won the Greyhound Data Sprint which was the first race on the card. Oliver Canavan’s pup rallied well on the home straight to get the better of Do It Lilly by 0.75 lengths in a time of 17.08 and recorded his first career win on his sixth attempt. Dasher also won the bag of O’Neills Dog Food sponsored by Andrew O’Neill. 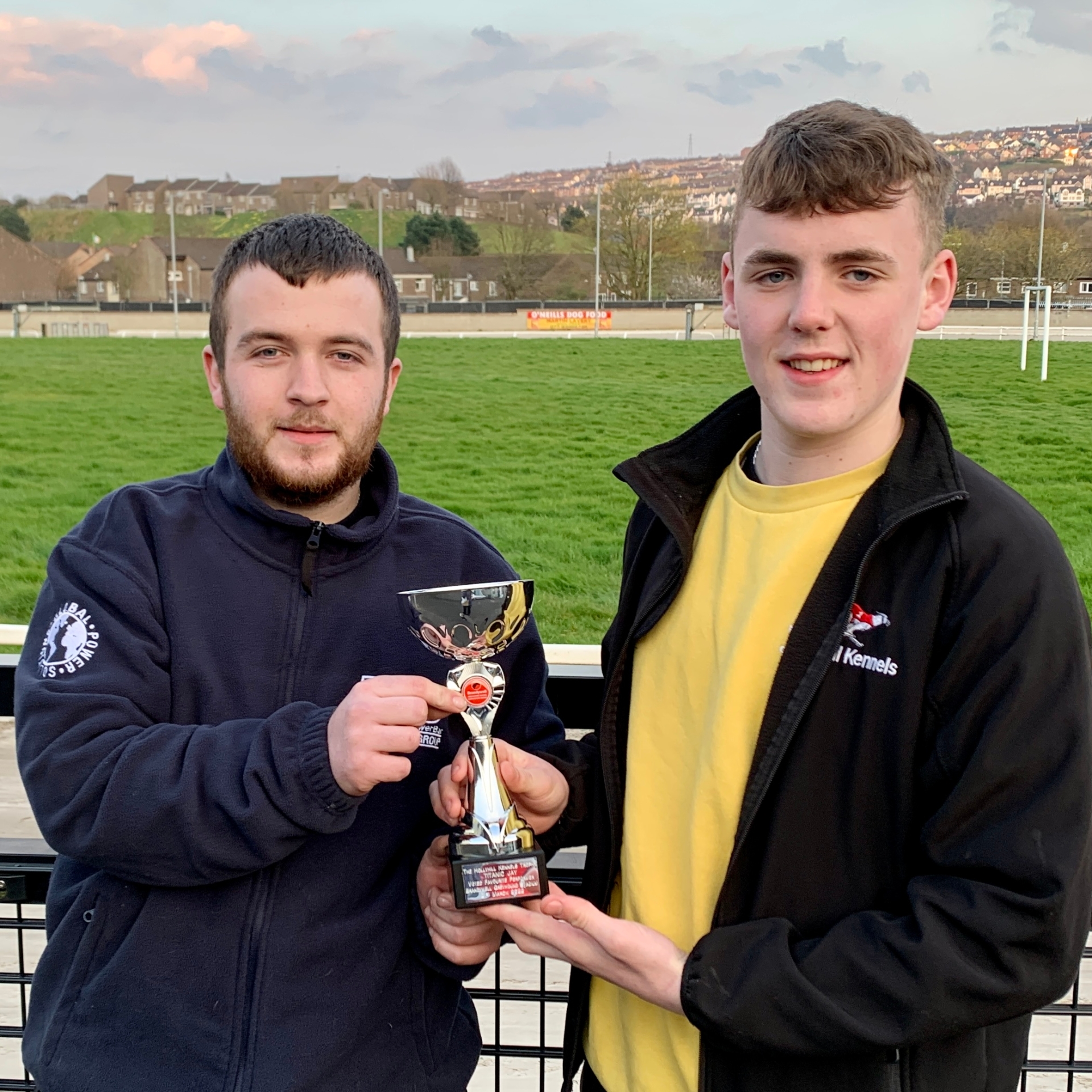 The second race, A New Era In Racing Sprint, also saw the principles battle out a close finish and it was Soap Addict (Droopys Jet x Droopys Plum, Aug ’20) that showed plenty of determination to hold off her nearest rival by 0.5 length for owner Niall McGhee. This well-bred pup did 17.26 and has a competitive attitude which will be an advantage in her future career.

Ex-Youghal hound, Great Flyer (Laughil Blake x Super Jenny, Dec ’19) had some smart form at Youghal and Drumbo but it was his third visit to the Brandywell before he got his first win at the circuit in a fast 16.74 for owner Richard Grieve and trainer Lee Ferris. He also won the Brandywell Greyhound Supporters Group £50 End of Month Bonus which was carried forward from Feb 2022.

Do It Stevie (Eden The Kid x Coonough Bell, Jun ’20) was presented with the Derramore Kennels Trophy sponsored by Harvey Lavelle after he was voted ‘favourite performer’ on 21st February 2022. The presentation took place at the podium as Stevie celebrated yet another victory. He made amends for a moderate start from trap 4 and ran on strongly to win the Help Yourself 500 for owner Ray White by 4 lengths in 28.06.

The Track Locals 500 was the sixth race on the card and it was a race of changing fortunes throughout. Generous Time (Magical Bale x Generous Daisy, Oct ’20) trapped fast but had to relinquish the lead to her rivals as they jockeyed for position up ahead. However, Time came from the back of the field at the fourth bend and flew up the outside to land the spoils by 1 length in 28.28 for owner Charlie Baxter. 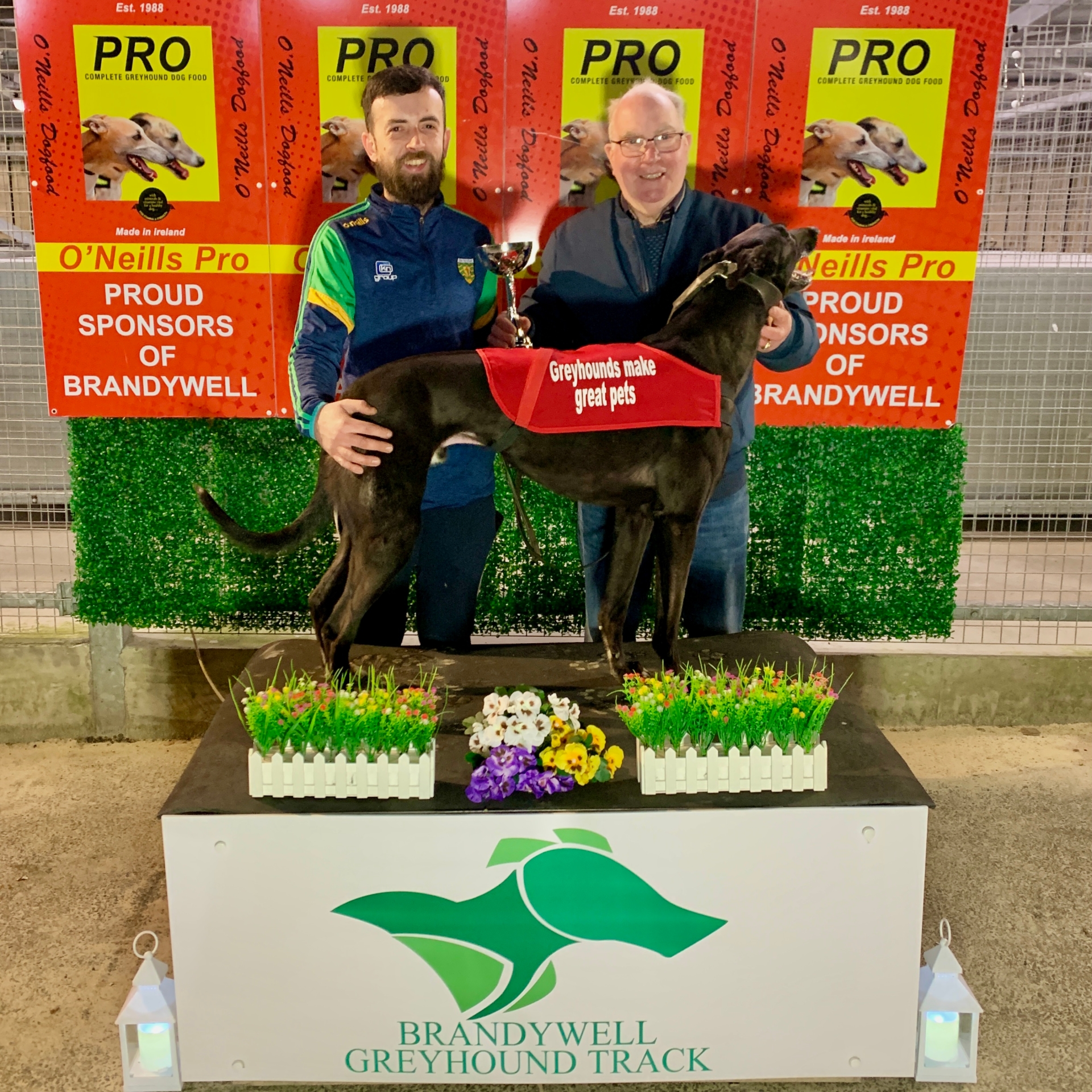 Double celebration. Do It Stevie who won the 5th race with Andrew White (left). Brian Macklin presented the Derramore Kennels Trophy on behalf of the sponsor Harvey Lavelle after Stevie was voted the ‘favourite performer’ at the 21st February 2022 race meeting.

It was a first career win and great rallying effort from this pup who looks like she will appreciate a step up in trip. She also won the Brandywell Greyhound Supporters Group £50 End of Month Bonus for March 2022.

Racing enthusiasts were delighted with news during the week that trial sessions would start on Tuesday morning at Lifford.

This is a major step forward towards racing returning to the venue.

The new owners, Lifford Greyhound Racing Club and their team are working hard to get the track and stadium ready for racing.

Early reports from Tuesday’s trial session were very positive. One owner said; ‘I saw a two dog trial today and the dogs strode out fluently and ran the bends very well, clocking a good time’. A video of one of the trials was shared online and it was an impressive sight.

The track and grounds were pristine and the dog was relishing the sand surface under his feet whilst in full flight chasing the electric lure.

Historically Lifford was always recognised as having one of the best racing surfaces in Ireland and that is clearly a reputation they are keen to maintain as welfare is an absolute priority.

The next trial session is scheduled for Saturday morning and details can be found on the Lifford Greyhound Stadium FB page or @LiffordStadium on Twitter for anyone wishing to trial their greyhound.