Victory for Derry but they remain in Division 2 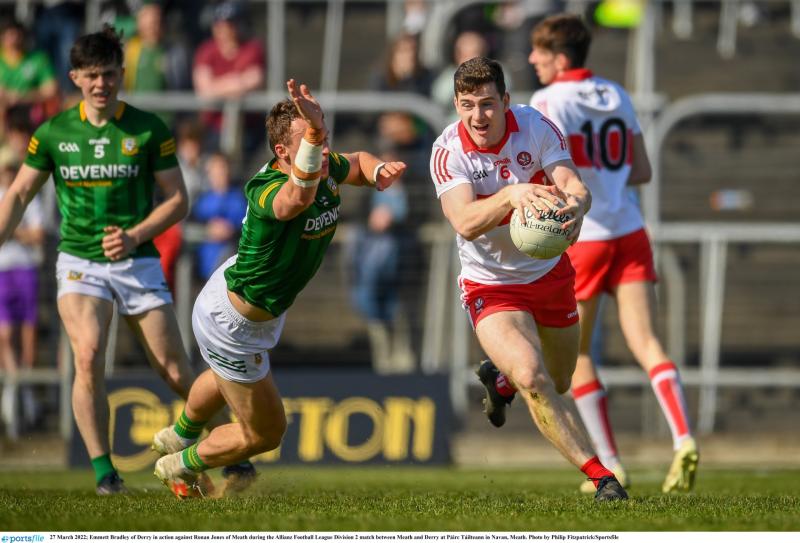 Derry defeated Meath today but missed out on promotion.

Derry signed off their Division Two campaign with a sterling comeback to defeat Meath in Navan.

Up against the ropes and trailing by five points midway through the second half, Rory Gallagher’s dug deep to snatch victory in the dying embers of the game.

Niall Loughlin, with 1-4, produced a man of the match performance for Derry with the returning Shane McGuigan helping himself to 0-6, with four fine points from play.

Unfortunately for Derry, however, Roscommon held off the challenge of Galway to pip Derry to promotion and a league final next weekend.

One bad day at the office, that filleting at the hands of table toppers Galway last day out, left Derry’s fate at the whims of the gods. But a reaction to last week’s season nadir would have fuelled every Derry training session until this fixture. Their footballing year could not be defined by that one pitiful performance.

Derry would have to defeat Meath, and hope that an understrength Galway would need to beat neighbours Roscommon. An outside bet even for the most one-eyed Oakleaf enthusiast.

A powerful and pleasing opening quarter witnessed Derry burst out of the blocks. The Oakleafers looked determined to right a few wrongs. While not everything went right, Derry’s intent, athleticism and hunger was the key aspect to the contest. The visitors led 0-6 to two points and controlled the game’s possession and territory. Shane McGuigan marked his return to open the scoring, and added a couple more within minutes. Niall Loughlin, Benny Heron and Ethan Doherty. This was the Derry that had blazed an early trail to the summit of Division Two and promised so much.

But within minutes last week’s failing returned quickly to haunt them. Three quick scores, including Jack O’Connor’s 20th minute goal snatched the lead for Meath. Again, the Meath goal came courtesy of a Derry kick out malfunction. For Derry fans it seemed like an unwelcome return to the scene of a crime. Confidence appeared to drain from the players’ faces, and the Oakleaf men withdrew into their collective shell as Meath snatched control of proceedings.

While Derry continued to field all fifteen men in their own half but Meath still able to find space and carve out opportunities.

And had it not been for an outstanding Odhran Lynch diving save in the 31st minute, Derry might well have been dead and buried. Late points from Ronan Jones and Menton further extended the home advantage, as Meath ran in 1-7 to 0-7 up at half-time.

Struggling to rediscover their early game tempo, Derry did work one late goal chance which the normally reliable Benny Heron dragged just wide of the post.

Two quick scores after the break suggested Derry had found their mojo again. Shane McGuigan nailed a free before Niall Loughlin dropped the shoulder and tapped over from 30 metres to leave it a two point game.

A Shane Walsh penalty in the 49th minute, followed by points from Thomas O’Reilly and Harry Hogan all but signposted a home win with Meath leading 2-10 to 0-11.

But Derry somehow found a gear that had missed for most of the contest. Full-backs Conor McCluskey, Brendan Rogers and Chrissy McKaigue all began bombing forward. Padraig McGrogan and substitute Shea Downey followed suit as Derry began to test Meath’s mettle. Suffering at midfield for much of the first half, Emmett Bradley and Conor Glass dominated the final quarter of the contest. Glass in particular covered every blade of grass in the well-manicured Pairc Tailteann pitch. Shane Heavron bounced off the substitute bench and plucked a magnificent catch from the skies. It was all about the inches, and Derry simple refused to be beaten as the freshly found confidence cloakened.

Points from McGuigan and Padraig McGrogan breathed new life into Derry’s display, but there was more to come.

Niall Loughlin’s 64th minute goal brought the two sides level, and as the game sizzled to a white hot finish late Niall Toner and Conor Glass points stretched Derry’s neck over the winning line. All over the pitch Derry were performing heroics. Ciaran McFaul and that man Loughlin both dived dramatically to block goal bound efforts from Meath in a tremendous show of character and heart, and looking every bit as hungry as the drooling wolf.

Odhran Lynch pulled off a couple of fine saves too and show real mental strength in the face of adversity.

A decent band of Derry supporters had made the long journey south and they roared their approval. This was a hard earned win and augured much for the future. Championship can’t come quick enough.