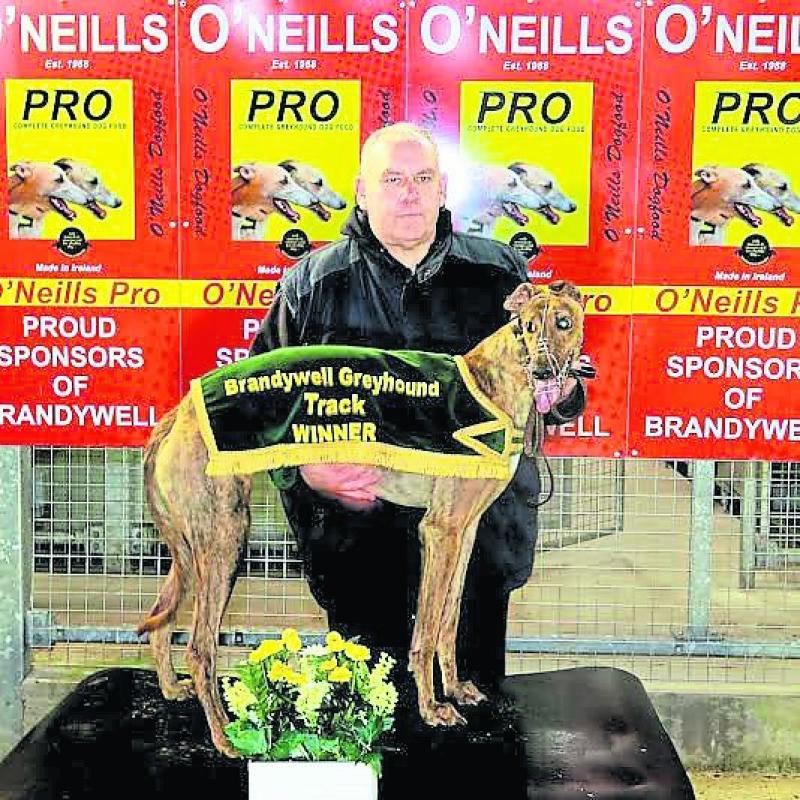 Race (300 yards) was won by BLACKSTONE CHRIS, from trap no 3iIn a time of 16.66. With winning owner, Thomas Hasson, Derry. Photo: John Killen

After a fortnight’s hiatus, it was great to be back racing again at the Brandywell. The eight-race programme started off with sprint action.

It has been two years since Fantasy registered a win and this brings the veteran’s tally of successes to four which have all been over this course and distance.

She was challenged on the home straight by Black On Black but she kept on well to hold off the challenger by half a length.
She now has two career successes with her previous win being at Youghal.

Early pace also paid off in the third race of the evening. Sensei (Farloe Rumble x Jaytee Grace, Sept ’19) was an impressive winner in 16.62 for Tommy McMinn.

This was his second career win and he recorded the fastest time of the night. He also has a decent 21.68 win at Dundalk to his credit. 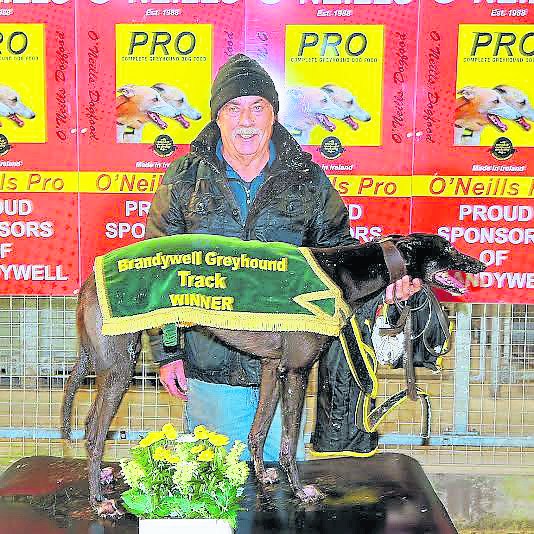 Race 7 (500 yards) was won by REBELLION from trap no3 in a time of 28.39., pictured with winning owner, Sean White, Strabane. Photo: John Killen

The 500 yards races got underway with the fourth race when Enaitchess (Iso Octane x Noeleens Choice, Sept ’19) took an early lead and won by 3.5 lengths in 27.94 from the staying on Move Over Daithi.

Darren McAleer’s dog has won two from his last three races and he has a good strike rate with five wins from 20 races overall.

Indian Swift (Laughil Blake x Armoy Blue, Aug ’18) recorded the fastest time of the night over the 500 yards when he won in 27.79 for Stephen McCooke.

This was his sixth career success and it was a welcome return to his best form from last September/October when he won five from eight of his races.

Palladium was a valiant runner-up, just half-a-length behind Swift and this Mar ’19 whelp should hopefully be winning in the near future. 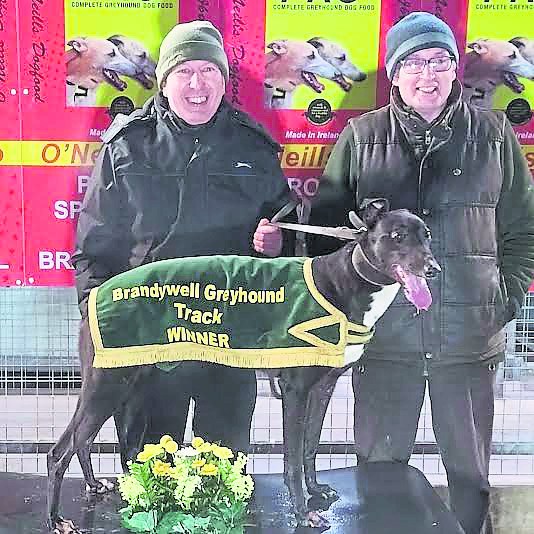 Marie Farrell’s Cavan Gossip (This One Time x Cavan Squaw, Aug ’19) was another hound on the night to use early pace to create an unassailable lead and she stopped the clock in 28.30.

This gives her a good strike rate of four career wins from only 12 races.

The only hound to come from behind to win on Tuesday was Rebellion (Eden The Kid x Gabbys Mila, Apr ’19) for Sean White.

She notched up her second career success in 28.39. Benefitting from a trap one draw, she tracked cleverly around the inside to take up the lead at the third bend and ran on well to win by 2.5 lengths.

Don Nico went into a few note books after finding trouble in running. He grabbed second place after a powerhouse finish. Nico is still learning his track craft but should be winning soon and he will relish a step up in distance.

Blackstone Chris (Ballymac Best x Laurdella Jane, Apr ’20) is always a force to be reckoned with over the sprint distance at Brandywell and he was foot perfect again when winning the last race in 16.66 for Thomas Hasson. Fast away from traps, he has now won six of his last eight races.

Chief executive, Dearbhla O’Brien, and chairperson, Frank Nyhan, of Greyhound Racing Ireland (GRI), spoke with optimism about the future for the greyhound industry in Ireland at the 2021 National Greyhound Racing Awards which took place online on Sunday last, March 13.

Mr Nyhan spoke about the view of the Industry that has been allowed to develop on mainstream media.

He commended the Irish Greyhound Owners and Breeders Federation for their proactive work and highlighted their Back To The Track series of short videos as being a great way to showcase the truth about our Industry.

Mr Nyhan further stated that the GRI were one of the biggest dog welfare organisations in Ireland, that it had the most welfare Inspectors and that they carried out the most inspections of kennels. The emphasis on welfare was a 'top priority,' he said.
He added: “Uniquely, the GRI has a code of conduct that is enforced and that all our greyhounds can be accounted for, thanks to the introduction of the Traceability System.”

In a rousing speech, Ms O’Brien acknowledged that whilst we were involved in the sport for the passion and love of the dogs, we also had to remember that it was an important Industry with significant economic value and benefits.

Citing data from a 2019 report, she highlighted that the Industry’s net contribution to the economy was estimated at circa 132 million euro and that it provided over 4,000 full or part-time jobs with over 6,000 owners and 400 trainers registered with the GRI.

She also outlined exciting developments within the GRI’s Care and Welfare Programme and announced that this year the Irish Greyhound Derby would be broadcast on national television.

Ms O’Brien went on to say: “This is an Industry, a sport and above all a community worth fighting for and I commit to that on your behalf.”