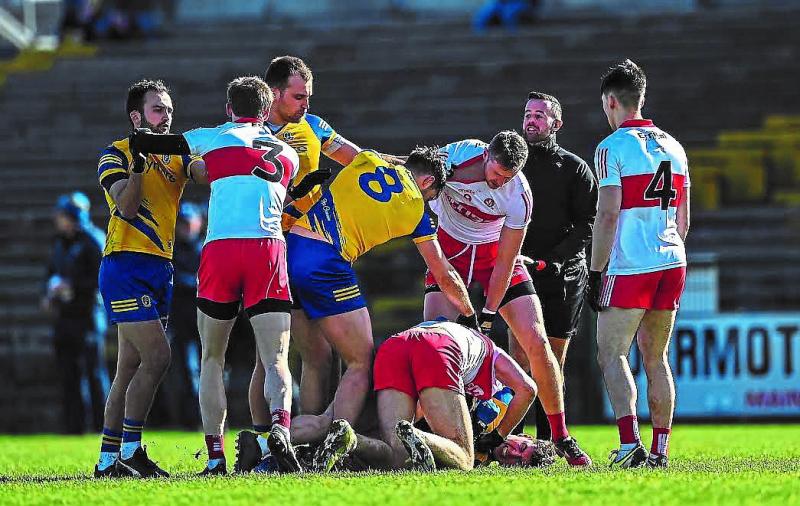 Players tussle off the ball during the Allianz Football League Division 2 match between Roscommon and Derry at Dr Hyde Park in Roscommon. Photos: Piaras Ó Mídheach/Sportsfile

Derry came back from six points down to take their unbeaten league run to 12 games in an action packed draw with Roscommon in Dr Hyde Park yesterday afternoon.

Derry looked to have won the game when Shane McGuigan kicked his eighth point in the 70th minute, but substitute Keith Doyle levelled matters in the six minutes on injury time.

In the last frantic play, Shane McGuigan was hauled to the ground by Brian Stack and not allowed to get back in the play.

Stack was shown a black card, with McGuigan picking up a second booking.

After his dismissal, Emmett Bradley had a chance to win the game, but his wind-assisted free from 45 metres trailed to the left and wide with the last action.

Derry welcome Galway to Owenbeg next Sunday, with Padraic Joyce’s side having won all five games.

It was the Oakleafers that started brightest against the breeze with two points from Shane McGuigan after eight minutes.

Gareth McKinless wore 12, but lined out at wing back, with Conor Glass dropping back into the ‘D’ when Derry lost possession.

Ethan Doherty and Benny Heron played as an inside two, with McGuigan and Loughlin playing much deeper.

A Donie Smith free had Roscommon off the mark after ten minutes, with Ciaran Murtagh setting him up for an equaliser.

Odhrán Lynch kicked well in the opening stages, but when the Rossies pushed up on the kick-out from Smith’s point Eddie Nolan rose about Emmett Bradley to fist the ball back into the danger zone and Cox put Roscommon into the lead for the first time.

Donie Smith added a third and a long-range Niall Daly score put the home side 0-5 to 0-2 ahead after 18 minutes.
Benny Heron and and Eddie Nolan traded scores, but Derry were chasing the game as Roscommon maintained their three-point lead.

Derry did have chances, but hit four first half wides and dropped two short into goalkeeper Lavin in the face of a tricky breeze.

With two minutes to the break, and with Derry trailing 0-7 to 0-4, Niall Loughlin elected to go for goal in a busy Roscommon box and when his shot came off the back of a defender, Richard Hughes put Donie Smith in for a point at the other end of a breakaway.

Paul Cassidy also had a half chance in the last minute, but with the angle not favouring him, he had his shot blocked by Colm Lavin and Glass was off-target from the ‘45.’

Roscommon brought on Cathal Heneghan at the break and after escaping from the attentions of Gareth McKinless to kick a point after four seconds.

From the kick-out, Cian McKeon added a score and Derry were starring into the face of a six-point deficit.

Paudi McGrogan kept up his record of scoring in every league game with a vital point – Derry’s first in 16 minutes – to break the Roscommon momentum.

Derry were given a 'get out of jail' card minutes later.

Cathal Heneghan found himself in space and after shrugging off a Conor McCluskey challenge was through on goalkeeper Lynch, but referee Longergan failed to play an advantage and called back the free.

There was a stoppage in play for a spate of wrestling all over the pitch and a game, which lacked any malice, began to spiral into a mess with five yellow cards in a four minute spell.

When he had finished with notebook, Lonergan allowed Cox to covert his free to put Roscommon 0-11 to 0-5 ahead, but a Heneghan goal could’ve put the game out of sight.Paul Cassidy fisted over a point in a spell that saw Odhrán Lynch continued to be a spare man at midfield on Colm Lavin’s kick-outs.

With the short and long option no longer available, Lavin was forced to kick it into congestion during a defining spell in the game. Cassidy cut out a kick-out that led to a McGuigan free.

And so it continued.  Lavin kicked the ball into the middle and a more hungry Derry began to thrive on their own self-generated momentum.

Three McGuigan frees had Derry within a point before Brendan Rogers got forward to kick an equaliser.

It was all Derry at this point and McGuigan tied the game before the Doyle’s equaliser and the late, late drama.