Candystripes are back on top of the Premier Division! 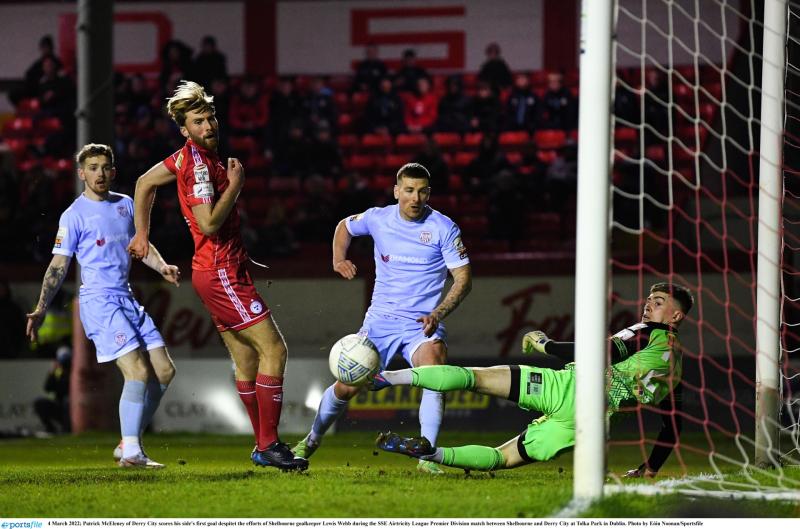 Patrick McEleney sends his shot past Lewis Webb to score the only goal of the game at Tolka Park.

Patrick McEleney's first Derry City goal in over six years sent the Candystripes back to the top of the Premier Division.

The midfielder, who last scored in a City shirt back in October 2015,  struck with less than 20 minutes remaining to win a game that was always likely to be decided by one goal.

It was 21 minutes before either goalkeeper had work to do, and it was simple enough for Lewis Webb in the Shels goal, but Jamie McGonigle will feel he could have done better after taking down a pass from Ronan Boyce and turning sharply only to shoot straight at the goalkeeper.

Derry City waited 40 minutes for their first real chance and it was one they should have taken when McEleney sent Joe Thomson running through towards goal. It seemed certain that Thomson would pull the trigger but instead he tried to pass inside for Brandon Kavanagh and a Shels defender intercepted, much to the frustration of Ruaidhri Higgins on the sidelines.

Just past the hour mark, Ruaidhri Higgins made a necessary change to try and inject some life into his team, with Matty Smith coming in for Joe Thomson. A half chance soon followed for City when the alert Kavanagh clipped the ball into the area for McGonigle, who could only shoot over the bar under pressure.

The goal the game desperately needed finally arrived on 72 minutes and it was a special moment for Patrick McEleney, who scored his first goal since his return to the club. Shelbourne only half cleared a corner and when Matty Smith returned the ball back into the area, the unmarked Ronan Boyce’s header was brilliantly saved by Webb, but McEleney was on hand to tap in the rebound to break the deadlock.

The goal forced Shels to change their thinking in the closing stages and that suited Derry who very nearly made it 2-0, McGonigle working hard to dig outa  cross for Smith, who volleyed just over with five minutes remaining.

There were five minutes of added time for Shelbourne to force an equaliser, and for the first time in the game the home side applied some serious pressure, but Conor Kane shot poorly wide when in a decent position, and with that, victory was assured for the Candystripes.

With Shamrock Rovers losing 1-0 at St. Patrick's Athletic, City go back to the top of the table.