City of Derry runner is the NI/Ulster Senior XC winner 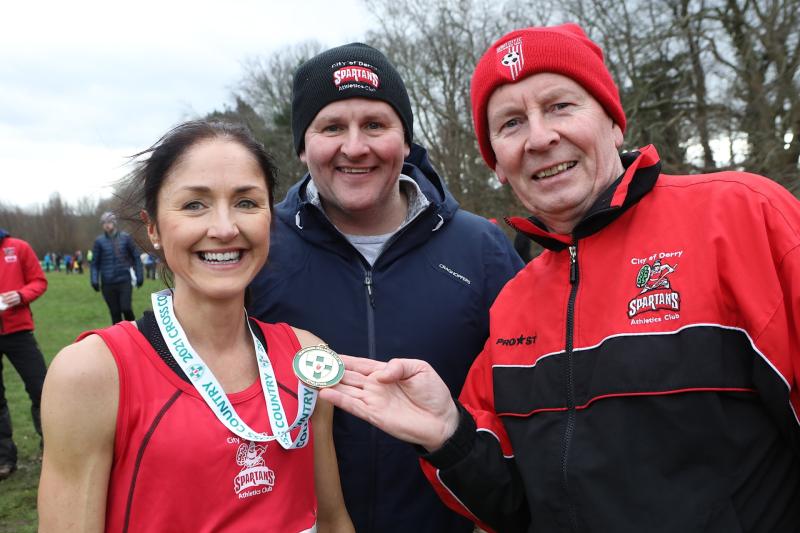 Catherine Whoriskey stormed to a thrilling victory at Saturday's NI/Ulster senior women's XC championships in the Gransha grounds, outsprinting North Down's Jessica Craig after the duo had battled each other for around half of the 6K distance.

The red vested Spartan and Craig, in yellow and blue,  went clear of Newcastle's Kerry O Flatherty on the second of the three strength sapping laps and it was a real battle of attrition from there to the finish, with the spectators on the side-lines absolutely enthralled by the unfolding duel.

Craig was surging, trying to get away, but Whoriskey matched every move. Closing in on the end of lap three Craig eked out about five metres as the final 200 metres loomed. Whoriskey loudly encouraged by the local supporters dug deep and as the finish came into view,  produced a late, late sprint to burst up to and past her rival j for a two second advantage and the championship gold medal.

A brilliant win and with support from club mates Angeline McShane,  Jacqui McMonagle and Paula McGilloway the Spartans claimed a surprise team bronze medal performance behind North Down and Newcastle.

There was another team bronze performance from the local Spartans in the men's 12K championship race which followed.

Like their female counterparts they toed the line seriously under strength but a gutsy collective effort saw them also on the podium six gruelling laps later.

All in all a terrific afternoon's racing with the course holding up well despite the huge volume of rainfall in the preceding period.
Credit to landowners the WHSCT for allowing the event to go ahead and Gransha once again demonstrated it is the perfect location for top class XC racing, both runner and spectator friendly.