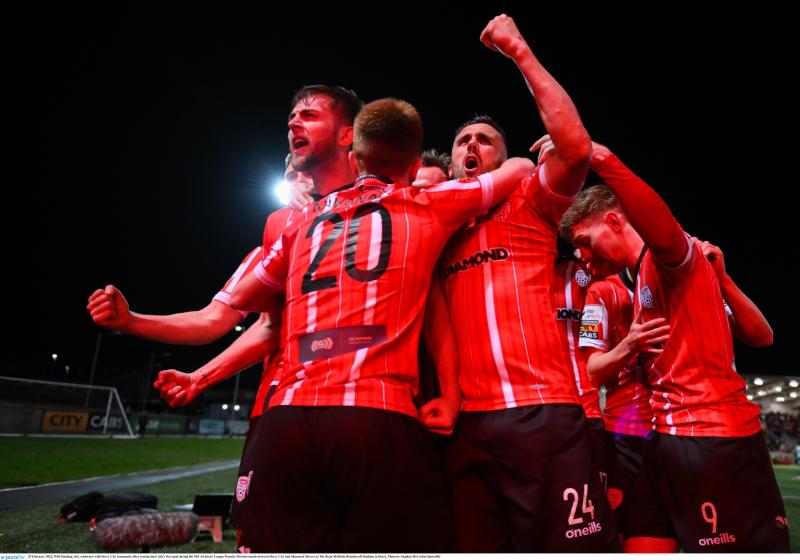 There were incredible scenes of celebration at the Brandywell.

There were sensational scenes at the Brandywell as Jamie McGonigle scored a sensational 95th minute winner as Derry City defeated Shamrock Rovers.

The striker latched on to a poor back pass from Roberto Lopes before firing into the top corner past Alan Mannus to spark wild scenes of celebration amongst the home support.

It was an incredible end to a tense contest at the Brandywell which ended with a thrilling finish as the Candystripes defeated Rovers for the first time in foive years.

City goalkeeper Brian Maher came to his team’s rescue on 18 minutes as one moment of quality cut the Derry defence apart. Jack Byrne spotted the run of Rory Gaffney and picked him out with a pass which arrowed through City’s defence to put the striker through on goal. Gaffney bore down on goal just out of the reach of Eoin Toal, but Maher came to the rescue with a very good save to bat the ball away to safety.

Rovers came to close to taking the lead on the stroke of half time with a spectacular effort from Mandriou. The Rovers man met the ball in mid-air with a brilliant overhead kick from just inside the 18-yard box and Maher had to be alert, scrambling across his goal to push it wide for a corner.

Derry City were awarded a penalty early in the second half when Jamie McGonigle went down in the area after a challenge from Byrne with referee Rob Hennessey having no hesitation in pointing to the spot. Will Patching stepped up and very casually sent Alan Mannus the wrong way to give City the lead on 54 minutes.

It was then Stephen Bradley’s turn to change things up, and he made three changes with Graham Burke, Andy Lyons and Dylan Watts all coming into the game on 65 minutes as Rovers chased the equaliser.

That equaliser duly came as Derry succumbed to the growing pressure from Rovers. Ciaron Harkin fouled Gary O’Neill right on the edge of the area, ending his game in the process due to injury, and Dylan Watts curled a beauty of a free kick past Maher and into the net to make it 1-1 on 73 minutes.

But the best was still to come an when Lopes slipped deep into added time, McGonigle went through and produced a sensational finish to win it for Derry City.