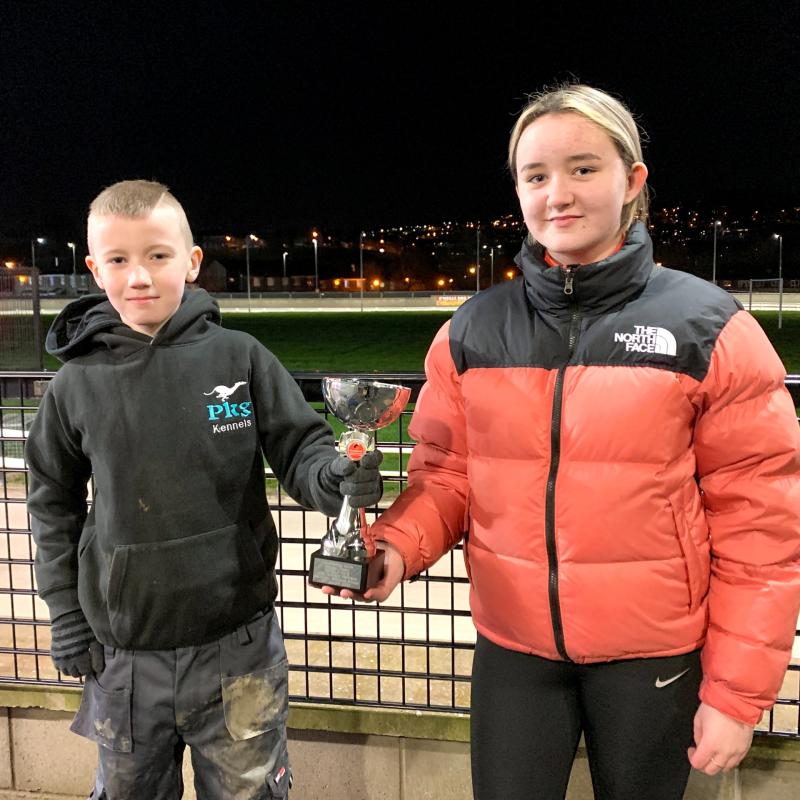 Just 12 hours after Storm Franklin had passed and we had a calm, dry, but chilly evening at the Brandywell. There was a 7 race programme which featured the Manuone 500 and the Best Wishes from Winnie 525.

Damien McConville’s dogs are in top form at present and his pup Eager Flame (Drumcrow Trump x Flaming Ember, Sep ’20) recorded her first career victory on her third start. She showed good early pace to the first bend and tracked well around the bends to shake off her nearest rival and won by 2.75 lengths in 16.90.

Pronto Sleaty (Crash x Strategic Folly, Jul ’20) was another hound on the night to record his first win on his third career start.

He won by 3.5 lengths in 16.87 for Mark Canning and he looks sure to improve with race experience and age. His dam, Strategic Folly, is well proven and her offspring have won almost 250 races between them. He is a stunning looking hound and one that has plenty of potential.

Dubailte Pog (Droopys Sydney x Shirocco Star, Sep ’19) was a deserving winner of the third sprint as his early pace took him clear of the field at the first bend and although tracking a middle to wide course, he had plenty in the tank to win by 3.75 lengths in 16.73 for Gerry McGettigan. This was a third career win for this lightly raced lad.

His dam had won in 17.02 around the Brandywell circuit and has thrown many classy offspring with 12 rated over 100 on the Greyhound Data website.

Pog is a litter brother to Manuone who is owned by Tony Maxwell and who coincidentally sponsored the next race on the programme.

Mineola King (Laughil Blake x Throw The Dice, May ’18) notched up an incredible fourth win from his last four starts at Brandywell for owner Paul McFadden. Whilst he has raced elsewhere in between these wins, he seems ideally suited to his local circuit where he used his early pace and wide seeding to full advantage in another paw perfect display in the Manuone 500.

He recorded 27.99 and finished half a length ahead of Boherna Scott for Charles and Nathan Coyle who was a fast finishing second. It should not be long before Scott makes amends for this narrow defeat.

Dankasa (Droopys Jet x Croom Bells, Jun ’19) was having his first race at Brandywell after racing at Youghal and Enniscorthy where he notched up 3 career wins at the tough Youghal circuit. Normally a strong finisher over 525 yards, the writing was on the wall for his opposition when Dankasa took an early lead from trap 1 and never looked to be in any danger of being caught.

He recorded 28.32 for the 500 yards for owner Jordan Morrison and that is a time he could improve on, given more experience over the Brandywell circuit. He hails from a very good litter that have all had plenty of success.

Oliver Canavan sponsored the sixth race on the programme, the Best Wishes from Winnie 525. Do It Stevie (Eden The Kid x Coonough Bell, Jun ’20) got his first career win under his collar on his fourth career start for owner Ray White in 29.75.

He was slowly away from trap 4 and switched out wide behind Eager Empress on the run to the first bend. He then navigated his way through the field and ran on well to win by 2.75 lengths from the early leader Cavan Gossip. This was a determined run from the pup and that is an attitude that should win him plenty of races. Stevie also won the bag of O’Neill’s Dog Food which was sponsored by Andrew O’Neill.

Faithful Vinnie (Laughil Blake x Faithful Linda, Oct ’19) was an impressive winner of the last race for Charles Coyle and Shaun Harley in 16.69 which was the fastest time of the night. He has a 29.12 win at Thurles over 525 yards on his card so he looks the sort that could be very useful indeed when stepped up in distance. This was only his second career win but he is a lightly raced lad and should be open to further improvement.

There will be no racing at Brandywell next Monday 28th February but we are scheduled to be back on track again for the 7th March.