'Ronan Boyce could be a future captain of Derry City' 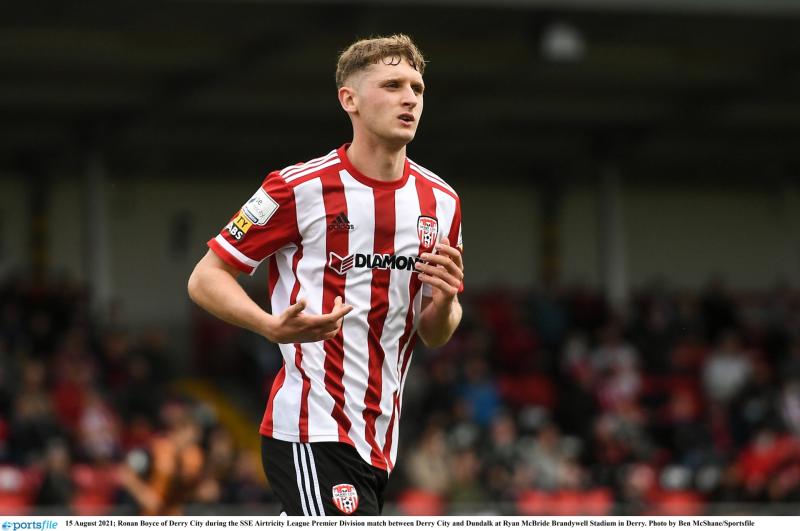 Ruaidhri Higgins has backed Ronan Boyce to become a future captain of Derry City after both parties signed new contract extensions which will keep them at the club until the end of 2025.

News of the new contracts was shared by City Chairman Philip O’Doherty at a function for club sponsors on Tuesday evening at the Bishopsgate Hotel.

Higgins has been in charge since last April and in his first season at the club led the Candystripes to a fourth-place finish and European football. Boyce meanwhile, has been a regular in Higgins’ time at the club and excelled in his first full season in senior football, scoring 7 goals in 36 appearances. It is his second new contract in less than a year and shows how highly he is rated at the club.

Higgins said: “Ronan had three years remaining and he signed it early last year so he was only at the very early stages of that, but given the season that he had and his growth as a player, getting himself into the ‘Team of the Year’ and being an Irish U21 international it was only right that we rewarded him and extended his deal. We have him here for another four years.

"He is an outstanding young player with the right mentality and someone who can help drive this club forward and it wouldn’t surprise me in years to come of he became captain of this club.”

Meanwhile, Higgins admits his own new contract was unexpected.

“I’m delighted,” he said. “It’s quite unexpected to be honest with you. I’m delighted that Philip and the board see me as the right man to take the club forward. Part of the thinking obviously was that Michael (Duffy) and Ronan (Boyce) were on four years and they wanted me on the same and hopefully myself and the staff can help lead the team over the next number of years to try and become successful. We know it’s not going to happen overnight but the plan is over the next few years to compete towards the top end of Irish football.