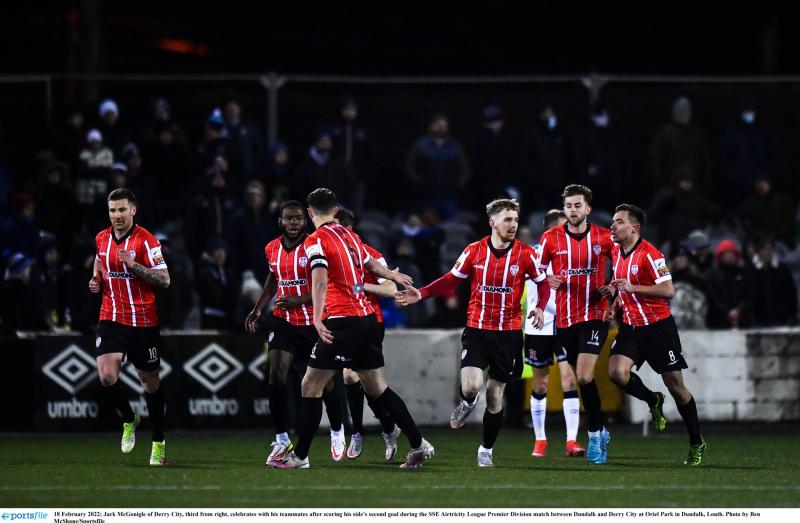 Derry City began the season with a 2-2 draw at Dundalk on Friday night past.

Ruaidhri Higgins is confident fans will see his team evolve and improve over the coming weeks and months after an encouraging draw at Oriel Park in the opening game of the season.

Goals from Joe Thomson and Jamie McGonigle helped Derry City come from behind twice against Dundalk, and while City certainly had the chance to win the game late on, the Derry City boss felt a point apiece was the fair result.

“On the balance of play a point is probably fair,” he explained afterwards. “It was two teams who went at it in extremely difficult conditions. I knew coming here how they would set up, and I knew they would have a go and we would have a go as well. I’m not surprised how the game ebbed and flowed, but the conditions played a part.

“This is what it’s all about – freezing cold, the place packed, unbelievable travelling support from Derry who deserve huge credit. On a day like this it would be easy to turn around and say ‘I’m going to sit in the house and watch it on the tv’, but there was amazing commitment from our supporters to make the journey.”

Derry City’s preparations for the game were thrown into disarray with both Michael Duffy and Matty Smith ruled out through injury, and with stormy conditions affecting all aspects of the game at Oriel, it was a game in which anything could have happened.

“Terrible conditions,” Higgins agreed. “It was unbelievably blustery and the wind changed and the game ebbed and flowed with that. Oriel Park is a difficult place to come to and we’ve managed to leave with a point. We’ve got to try and be ambitious and pick up three points, but a point here isn’t a disaster.

“We didn’t plan to miss probably our two natural wide players Michael Duffy and Matty Smith who were both unavailable to us. How we wanted to set up changed over the last few days. We’ve had to adapt and I think we’ll see the team evolve over the course of the next few months.”

After coming from behind twice, the Candystripes had the chance to win the game late on when Jamie McGonigle went through on goal only for his effort to come back off the crossbar. It was a superb chance for three points but Higgins praised his star striker afterwards after a performance which brought both an assist and a goal.

“I’m not going to stand here and criticise Jamie McGonigle because I thought his all-round performance was of the highest level,” he said. “His assist for the first goal was top, top drawer. He gets the ball out beside me on the sidelines, travels 40 or 50 yards and plays an exquisite pass across the face for Joe (Thomson), then he gets on the end of Akintunde’s cross to score.

“You would put your house on Jamie and he’s the one you would want on it, but the best strikers in the world miss chances. He’s caught it well, probably too well and it’s caught the underside of the bar. He’s hit the bar just before that as well. I thought he was a real, real handful and physically looks great.”

Higgins and his players must now prepare for the visit of Shamrock Rovers to the Brandywell this Friday, and after seeing is team have some difficulty dealing with set-plays on Friday night, the manager knows one area he will be working on going forward.

“They had size over us, they definitely had more physicality than us, but the conditions probably played a part in that as well,” he admitted. “I don’t want us to be a team who concedes soft goals from set-plays so we need to eradicate that of we are to grow as a team.”