Community gets behind Brian Ogs ahead of All-Ireland semi-final 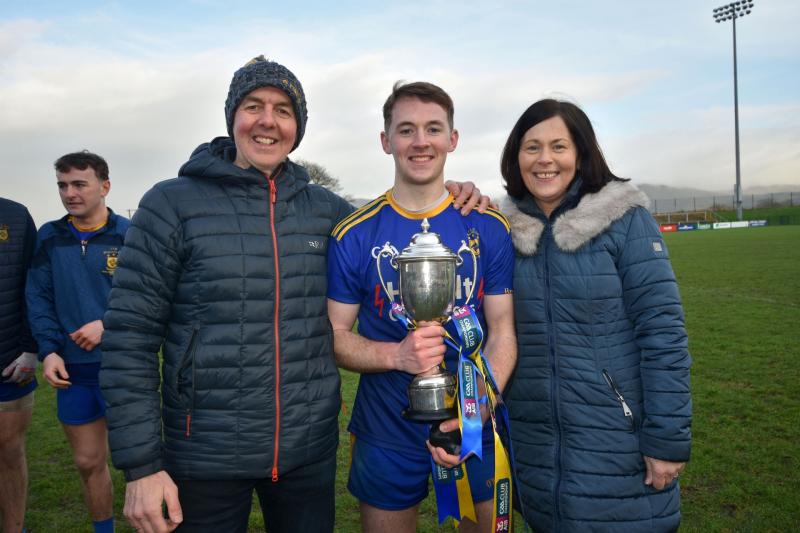 Colette Ramsey, who set up the Steelstown fundraiser, with husband Patrick and son Eoghan after the Ulster Intermediate title win against Moortown recently. Pic courtesy of Mary K Burke.

The people of Derry have rallied behind Steelstown Brian Ogs in remarkable fashion this week by donating over £10,000 to help the club prepare for their All-Ireland semi-final in Mayo.

While manager Hugh McGrath and his players have been hard at work ahead of their game against Kerry champions Na Gaeil this weekend, the club committee have been working hard behind the scenes to ensure that every base is covered ahead of arguably the biggest game in Steelstown’s history.

Colette Bradley set up a ‘Go Fund Me’ page for the men’s senior team a week ago, with the aim of raising £7,000 to help with the expenses which have come with the team’s planned trip to Mayo. Within days the target had not just been reached but surpassed, much to everyone’s delight.

“To be honest it’s a complete committee effort,” Colette explained. “The team was doing well and there was going to be expenses such as the hotel, staying overnight, the bus and food etc so we just sat down and thought about it and put our heads together.

“Brian Baker rang me and said to go ahead and try and get something set up. Of course, I nearly had a heart attack. I was a bit apprehensive but I thought ‘I just have to go for this’, so I did.

“I thought maybe if we reached £5,000 that would have gone a long way in covering expenses, but I just marked it at £7,000, thinking ‘well if we reach it we reach it and if we don’t that’s okay’.

“When we reached £7,000 everyone was asking what the next target was – was it ten, was it nine, was it eight? We just let it go and we didn’t change anything because the people are out there and the good will is there and we knew they would support it. Now we’re sitting today at £10,500.”

Recently elected to the club’s committee, Colette, whose son Eoghan is part of the men’s senior team, believes that the fundraising efforts have also had the additional effect of keeping everyone distracted as nerves begin to build ahead of Saturday’s semi-final.

“We are just thrilled,” she admitted. “I posted it onto the committee at 10:30pm and I went to bed at half eleven and at that stage there was £550 in it and I was thinking ‘this is unreal’. The buzz that it has sent through the club is great because everyone is on checking and it is actually a distraction from the event itself because you’re not worrying because all you’re wondering is ‘what are we sitting at now? This is unreal’.”

The aim of the fundraiser is ultimately to give the club the best possible chance this weekend, with an All-Ireland final at Croke Park just one game away.

“We want to give the team the opportunity to go down to Mayo, to have a nice place to stay, to get food, to get the coach and relax and play the game,” Colette continued. “Obviously we would love a win and to get into a final – but this just stems from the community spirit of the team and the players and the children. You want other children to be inspired and to come to Steelstown. You want them to be inspired no matter what sport it is.

“This senior team at the minute is doing well, as did the ladies this year and we also have great underage achievers. Everybody in the club is doing well.”

“No matter what money we raise, it will go first of all towards the team and whatever is left over you can guarantee that that will go back into the club and the young players and whatever their needs are, be it footballs, equipment for training, bibs, whatever is required throughout the next couple of years we’ll have a wee bit of money there and it will be used with a purpose, and there will be no wasted money. We have ideas for the future and we’ll still be raising finds for years and year and years but this has surpassed all expectations really. You take your hat off to the community and the spirit of people and the club, it is just amazing, it is amazing.”

The fundraising efforts have certainly been appreciated by the senior team, with manager Hugh McGrath admitting he is not surprised by the hard work going on elsewhere to support the team.

“We have a very good committee there and we’re loaded with really good club members, so anything that has been asked for in order to prepare for the game we’ve been given, and there hasn’t been a question asked about it. For us that’s always been the way about the club,” he said. “If you needed something that would help progress the team you’re involved with, as long as it’s reasonable enough, then the people in the positions of power will make sure it happens.

“That’s what needs to happen in order to be successful. It shows you the god will that is about at the minute. People see you doing well and they want you to continue to do well. It shows the level of positivity around GAA Games in the city as well that we’re at that stage.”

If you would like to donate to Steelstown’s latest fundraising effort, visit https://www.gofundme.com/f/help-fund-steelstown-brian-ogs