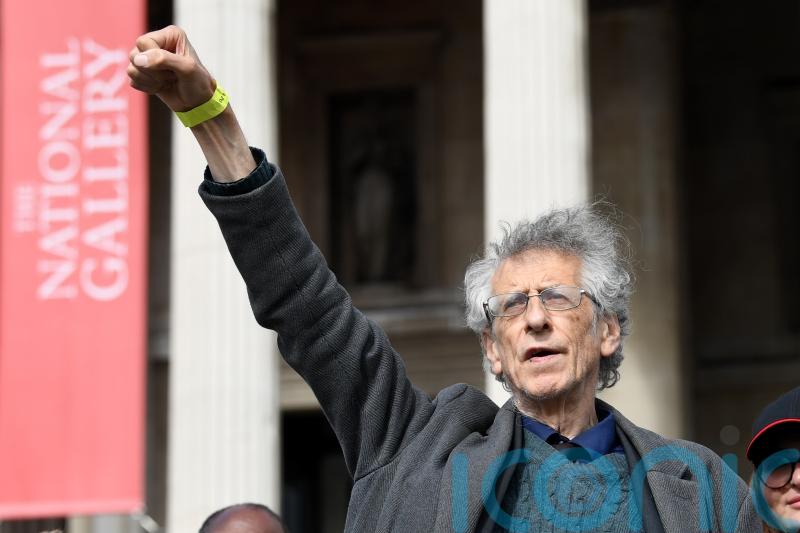 Piers Corbyn, the brother of the former Labour leader Jeremy Corbyn, has been fined at Derry Magistrate's Court today for breaching Covid regulations by attending and addressing a rally in the Guildhall Square in November 2020.

Piers Corbyn (75) of Innis House, East Street in London was charged with two counts of breaching Covid regulations on November 1 2020.

Corbyn defended himself and Dr McCloskey did not appear and she was tried in her absence.

The prosecution called the investigating officer who supplied videos taken from the evidence gathering vehicle in the Guildhall Square on November 1.

The video showed a crowd of around 50 people attending a rally in the Square being addressed by McCloskey.

One of the videos showed Corbyn in the crowd and in another he is seen addressing them.

Corbyn asked the police officer if she would agree there was only 3 people around him but she said she would not agree.

A second police officer gave evidence of being on duty on the day in question.

He said following the rally he approached the defendant and offered him a fixed penalty notice which was declined.

He said that the defendant said he wanted a hearing in court.

In response to a caution Corbyn answered 'fair enough'.

Another police officer told the court of going to McCloskey's home that same day to offer her a fixed penalty notice and he said she replied she would rather go to Maghaberry Prison.

District Judge Ted Magill said that there was no dispute that the defendant was at the protest.

The prosecution in closing their case said the regulations were clear that no more that 15 people could gather.

He said Corbyn 'chose'  to attend the protest and there were more than 15 people present.

Addressing the court Corbyn said he had 'a reasonable excuse' for his actions.

He said there was no evidence that his attendance at the rally had led to anyone becoming ill or dying.

He quoted the former British chancellor Rishi Sunak who said there had been too much reliance on scientists.

Judge Magill asked was he expected to take something 'Rishi Sunak said as Gospel' and the defendant said no.

The defendant argued that there was a lot of evidence that that Covid itself did not exist.

Judge Magill said it was not his job to act as a medical expert.

He said there was no dispute that the defendant had participated in the protest.

He said that the defendant was not entitled to any credit for the manner in which the case had been dealt with.