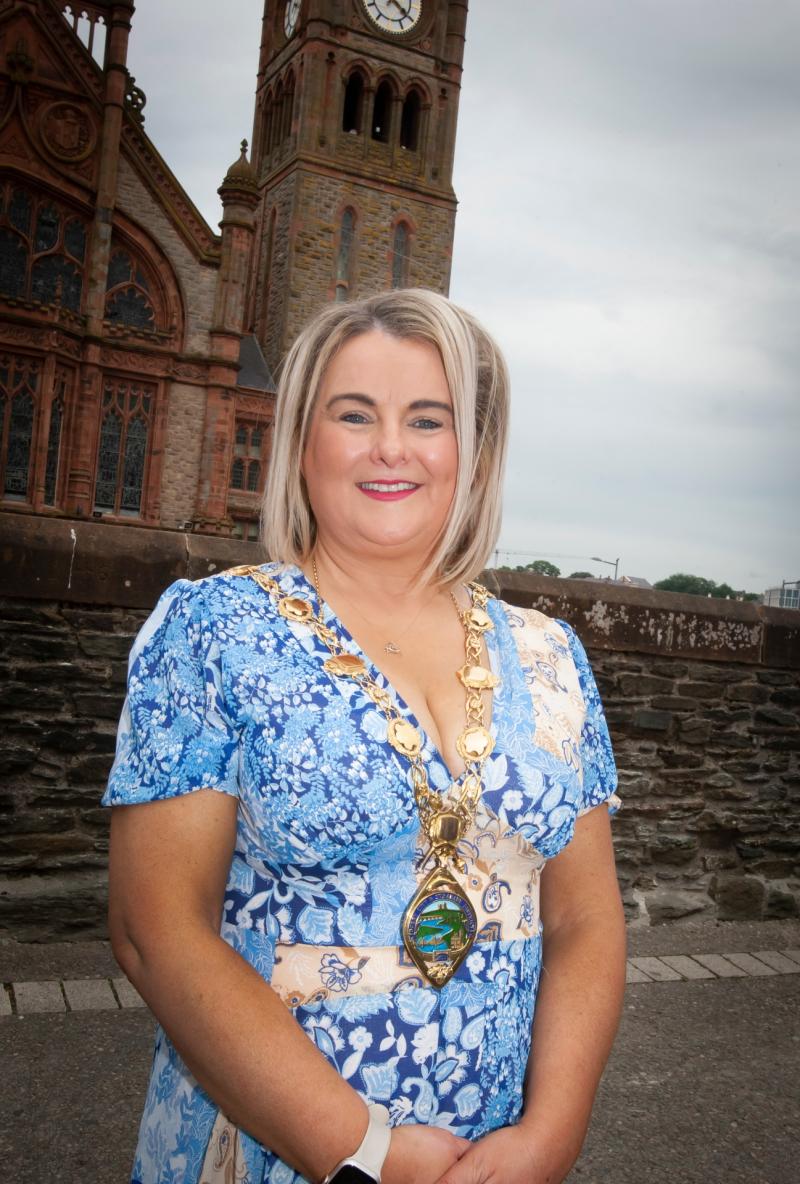 The new Mayor, Sandra Duffy, has vowed to be a ‘Mayor for All’ and will work to continue transforming Derry City & Strabane District.

Mayor Duffy takes over from Cllr Graham Warke, now formerly of the DUP after leaving that party to become an Independent, whose year-long term has just concluded. Cllr Angela Dobbins of the SDLP will serve as Deputy Mayor.

She insisted that her main commitment during her Mayoral year would be to represent all the people of the Council area with a special focus on tackling the cost of living crisis and doing all she can to help local communities and families at this difficult time.

She said: “From day one, I will be a Mayor for all and I will work with others (across this chamber) to deliver real change for ordinary workers and families across Derry and Strabane.

“To tackle the cost-of-living crisis and invest in our communities. To support workers and families who are struggling to heat their homes and put food on the table.

“As a local Council, we must do everything possible to support people. Derry and Strabane has huge potential to grow and thrive, for the city and district to be a great place to live, work and socialise, we have exciting times ahead.

“I will work to continue the transformation of the city, to grow the local economy and boost tourism by supporting our local businesses to create jobs. To ensure that the next generation has a future here.

“Only by working together and promoting the opportunities that exist in our city, will we deliver for people. I’m ready to get to work as your Mayor.

“For over 20 years, I have worked to tackle homelessness and ensure people have an affordable roof over their head.

That is why I have chosen First Housing Aid & Support Services as my Mayoral Charity for the year.

“I will be organising initiatives to raise funds to support the work they do to support families and vulnerable people who find themselves without a home, particularly people battling challenging circumstances through addiction and mental health.

“I plan to work with the charity to set up a fund for people who are exiting homelessness and setting up a home to help them with costs of buying fuel, electricity, and furniture. To give people a decent crack at a better future.

“While I am Mayor, the Guildhall will be open to every single citizen of this Council area.

“It is your Guildhall. A space to make your voice heard on the type of change you want to see. My door will always be open.

“I look forward to meeting and speaking with people right across the city and district over the next year, their views are what are important.

“I look forward to getting straight to work.”

Outgoing Mayor, Alderman Graham Warke handed over the Mayoral chain reflected on his busy term and extended his heartfelt thanks to the people of the City and District for their friendship and warmth over the past year.

He particularly acknowledged their support of his Mayoral Charity, Foyle Down Syndrome Trust in raising over £50,000 and extended his best wishes to the new incoming Mayor and Deputy Mayor saying he hoped the year ahead would be a great success.

As for the new Mayor's charity, Ms Duffy confirmed that she has chosen First Housing Aid & Support Services and how she was keen to work with the organisation to help raise funds to support the work they do to support families and vulnerable people who find themselves without a home, particularly people battling challenging circumstances through addiction and mental health.

She added that she planned to work with the charity to set up a fund for people who are exiting homelessness and setting up a home to help them with costs of buying fuel, electricity, and furniture.

In her speech to the Guildhall upon accepting the post, Mayor Duffy paid tribute to outgoing Mayor, Graham Warke.

She said: “Firstly, I want to thank the outgoing Mayor Graham Warke for a fantastic year representing everyone in our city and communities.

“After some difficult years under Covid restrictions it was such a delight to see Graham embrace the Mayor's role and go out into every corner of our district and bring joy to so many people.

“You have done an amazing job while also raising thousands of pounds for the Foyle Down Syndrome Trust, and importantly created a huge bond with the wonderful children, one of my highlights from the Mayor's ball was watching Eve's performance, she is amazing.

“The children have really become part of the fabric of the Guildhall now and I hope to continue to build and strengthen that relationship.”

She added: “A huge thanks also to my Sinn Féin party colleague Christopher Jackson on your year as Deputy Mayor.

“And to both your families who are a shoulder of support during what can be very long days with loads of travelling around the city and district.

“I want to congratulate Angela on her appointment as the Deputy Mayor, I am sure as two Ballyarnett councillors we will work well together. Congratulations also to everyone who has been appointed tonight as a chair or vice chair of committee, I wish you all the very best for the year ahead.”

Mayor Duffy also thanked her husband Kevin, her family and her colleagues.

She continued: “For me it a massive honour to be elected as Mayor of Derry City and Strabane District council today.

“I also want to thank my family, and my party colleagues, for their support.

“Without their guidance and backing, I wouldn’t be able to take on this role.

“I want to pay particular tribute to my husband who has always been a tower of strength to me over the years and has pushed me to take every opportunity especially after a difficult time as a family.

“For anyone who knows me will know that I’m passionate about our city and the people who live here.” Sandra Duffy was elected to Council for the Ballyarnett Ward in 2014 and is the Sinn Féin's Group Leader in the Chamber.

She is an ardent campaigner on social issues including ‘period poverty’ and made history in 2018 by ensuring Derry City &Strabane District Council became the first in Ireland to provide free period products in as many sporting grounds and public buildings as possible to combat this ever-growing issue.

Sandra is passionate about tackling homelessness and has been involved in this sector for over 20 years.

She now leads and has developed outreach services addressing homelessness among young people and those with complex needs that require an intense service to meet their needs, including issues around addiction and mental health.

Within council, Sandra has taken a lead role in establishing the North West City region as a good place to live, work and socialise, she has chaired the North West Regional development group, which drives economic cooperation within the region and has led a shop local campaign.

She has also taken on the chair of the PCSP (Policing & Community Safety Partnerships) and has a history of campaigning on road safety issues – such as the campaign to improve pedestrian safety on the Skeoge Link Road.

With a strong working relationships within the statutory, community and voluntary sectors.

Sandra has been a board member of Advice North West for over ten years and works with the western trust in relation to wider health and social services for the City and District.

She is heavily involved in St. Joseph’s Amateur Boxing Club, sits on Greater Shantallow Area Partnership Board, the Culmore Community Partnership and has a keen interest in all community groups and infrastructure in the local area.