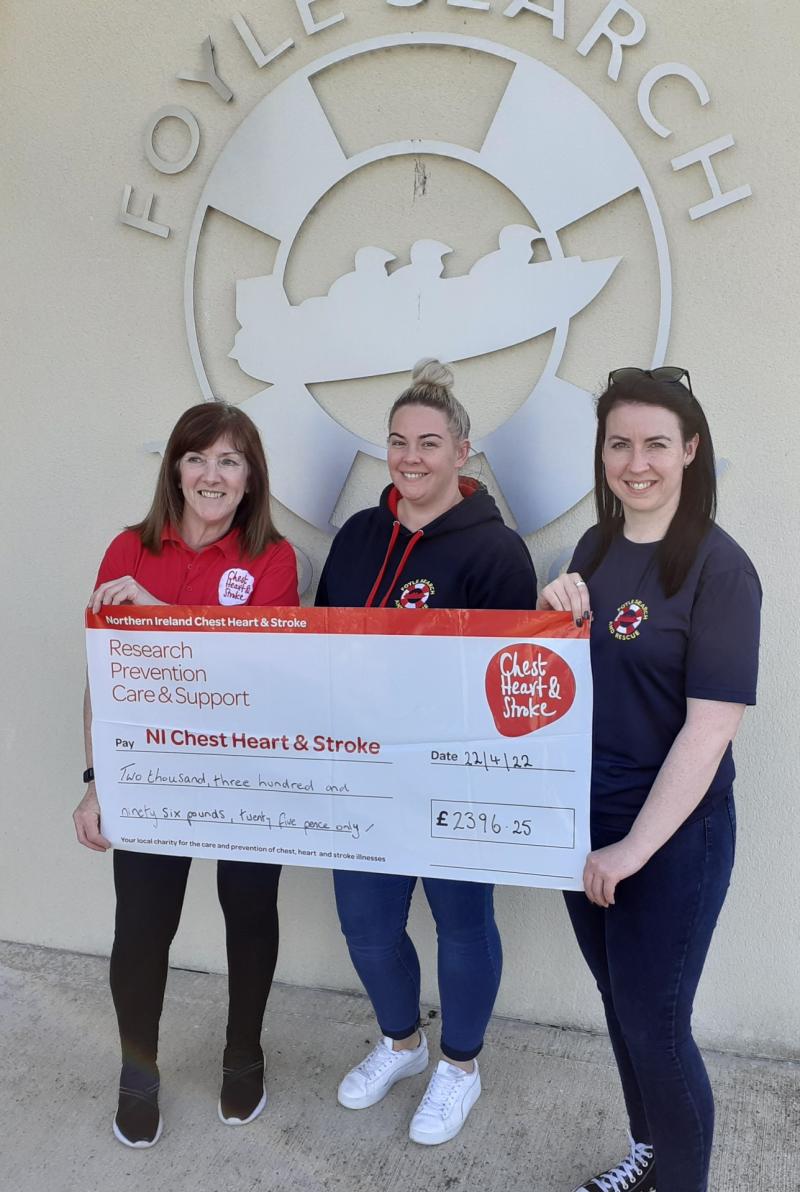 Generous Derry volunteers helped drum up a fifth of the £50,000 raised for the charity, Northern Ireland Chest Heart & Stroke (NICHS).

Back in February, as part of a North-wide fundraising effort, the Red Dress fun run took place in Derry along with similar runs across Northern Ireland.

The event was a huge success and the charity announced £50,000 has been raised to help tackle heart disease in Northern Ireland.

The Undertone’s drummer Billy Doherty is an ambassador for the charity and he recorded a good luck video to two local groups who really went the extra mile to support the Red Dress Fun Run 2022.

Amanda Ross and volunteers from Foyle Search and Rescue helped raise almost one fifth of the £50,000 – collectively fundraising a phenomenal £9213.

Amanda, from Newbuildings took part with a group of family and friends in memory of her beloved husband Barney who sadly passed away suddenly in August 2021 from a heart attack, aged just 60.

She said: “We wanted to take part in the Red Dress Fun Run to help raise awareness of the early signs and symptoms of a heart attack and to encourage people to get checked out if something doesn’t seem right.

“Barney experienced some heart attack symptoms, but he didn’t tell anyone, he just put them down to other things. He didn’t contact his doctor and I believe if he had gone to get checked out I wouldn’t be sitting here as a widow today. 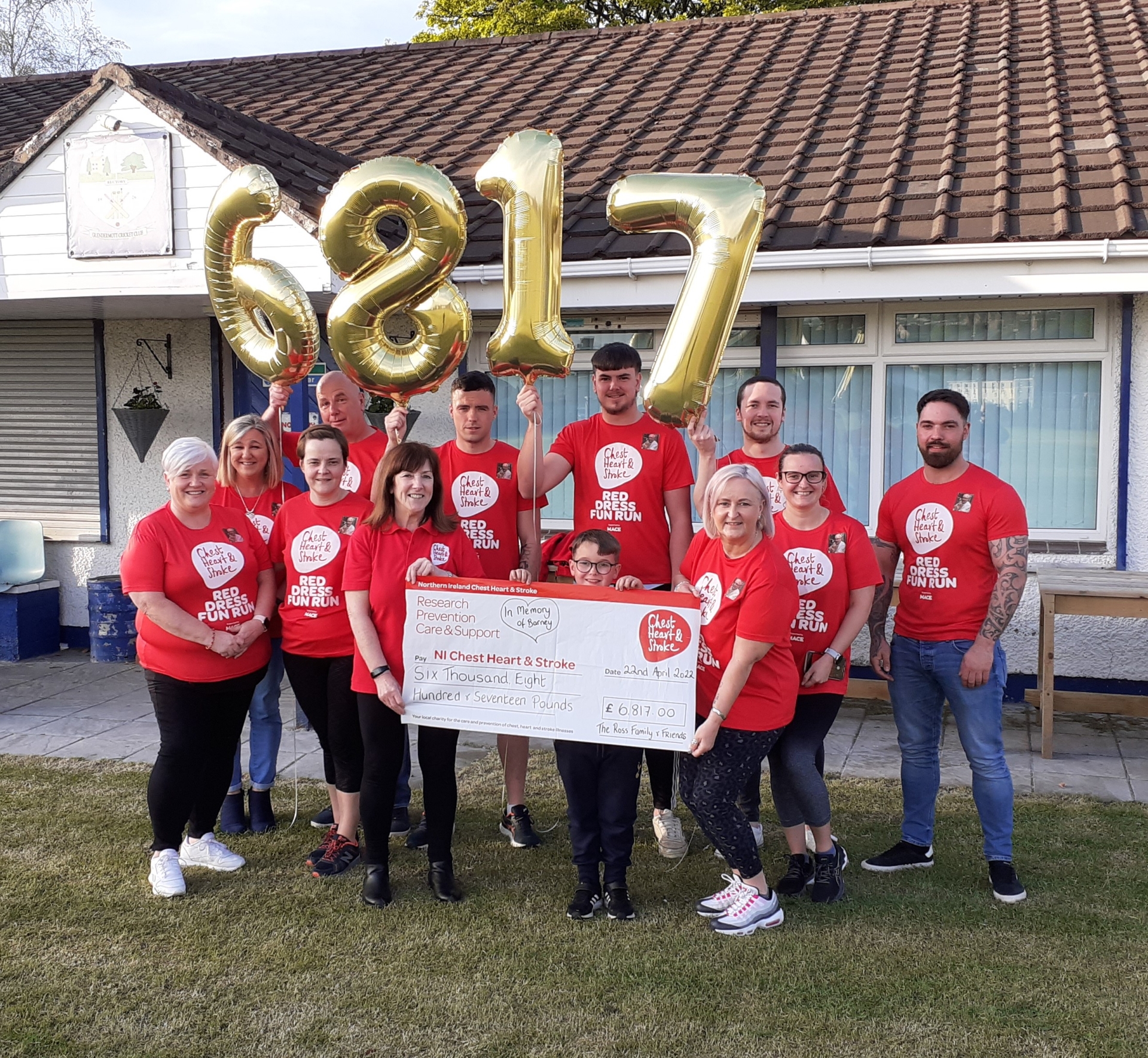 “To have raised all that money for Northern Ireland Chest Heart & Stroke is just amazing. Our involvement has not only helped raised vital funds for the charity’s work but has also helped raise awareness of heart health amongst the local community which we are delighted about.

“Our entire family now have the running bug thanks to the Red Dress Fun Run and personally I found it a great motivator to keep fit and healthy, mentally as well as physically.

“We are now planning to take part in the Waterside Half Marathon in September in support of NICHS.

“Next year I will be organising a virtual Red Dress Fun Run for people in the Derry area which will take place on the same day as the live Stormont event.

“Everyone is welcome to come and join the fun so please keep an eye on the NICHS website for more information coming soon and to register your interest in the event.”

Over 20 volunteers from Foyle Search and Rescue took part in a virtual Red Dress Fun Run in Derryon February 27. This was in support of one of their volunteers, Danielle Francis, who walked the 5K in memory of her mum’s partner, Michael, who died suddenly in January from a heart attack. He was only 47.

The team at Foyle Search and Rescue wanted to raise awareness and money for NICHS as they know all too well how crucial fundraising is to a charity. Danielle said: “This walk was also for those family and friends of our staff and volunteers who have passed away or been impacted by chest, heart and stroke conditions.

“We hope this money helps to support those suffering with life-changing illnesses and will help fund future research into the prevention of these illnesses. Thank you to each and every person who supported us and donated.”

Northern Ireland Chest Heart & Stroke’s charity partner MACE supported the Red Dress Fun Run. Diane Anthony from MACE added: “We are so proud to support NICHS, and this fantastic event, for another year.

“It was great to see so many people, like Amanda and the volunteers at Foyle Search and Rescue, get behind this worthy cause.

“We are already looking forward to next year’s Red Dress Fun Run and playing our part in raising vital funds to help local people from across Northern Ireland.”

Nadia Duncan, Events and Marketing Manager at NICHS continued: “We want to say a huge thank you to everyone who either came to the live event or took part in the Red Dress Run Fun virtually. The support we received this year was phenomenal and to raise £50,000 is just fantastic.

“As a charity, we rely on the public’s support because almost 90% of our care and prevention services and research projects are funded exclusively by donations. Fundraising efforts like Amanda’s, Danielle’s and the other volunteers from Foyle Search and Rescue are vital to what our charity can achieve. The funds they have helped raise will be vital in enabling us to continue to support the thousands of local people who need us and to provide life-changing services for them and their families.”

Planning is already underway for next year’s event and NICHS want to make it even bigger and better.

Nadia added: “We are delighted to announce the date for next year’s live Red Dress Fun Run is Sunday, February 26, 2023 so get the date in your diary now.

“The success of this year’s event has been tremendous, and we have been blown away by the generosity of everyone who took part, and everyone who donated.

“We want to extend a big thank you to all our supporters and hope to see even more people sign up for the 2023 event.”

For more information on the range of support services available from NICHS, log on to: https://nichs.org.uk/our-support-services