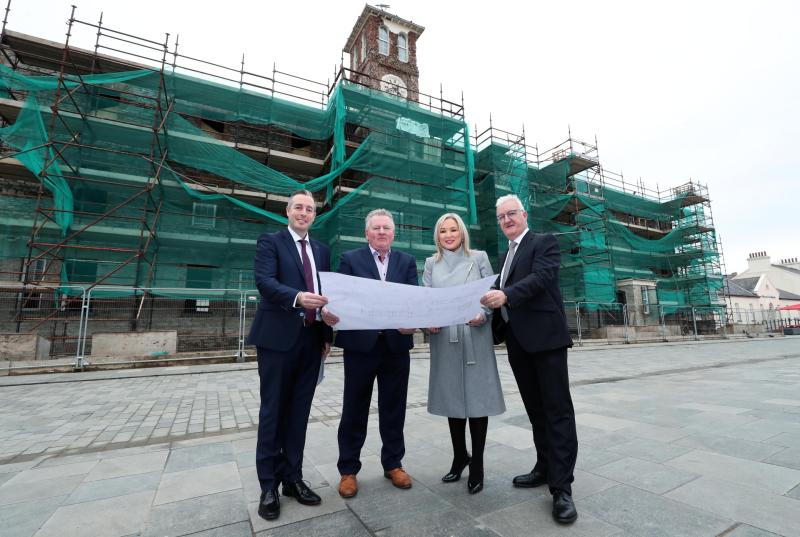 Joint First Ministers, Michelle O’Neill and Paul Givan, have announced that construction work for the new Ebrington Hotel will begin.

The £15 million development includes £7.25 million through the NI Investment Fund and £1.75 million from Invest Northern Ireland.
The Ministers were joined by developers Cecil Doherty and Liam Tourish to cut the first sod as works get underway.

The project will transform five buildings on the Ebrington site, including the Clock Tower, into a 152 bed four star hotel with spa and leisure facilities. Work is expected to be completed by summer 2023.

Joint First Minister, Michelle O'Neill of Sinn Féin, said: “The commencement of construction on the Ebrington Hotel is a milestone day for Derry.

“This major investment will create jobs both during the construction phase, and after the hotel has opened.

“We have made great progress in the development of the Ebrington site and, together with the Grade A Office space due to be completed soon, this new hotel will bring a renewed vibrancy and a real boost to the regional economy.

“I offer my congratulations to the developers and all who have played a part in getting us to this point.

“This latest good news story marks another step forward in our vision to regenerate the North West region.

“We are building on the opportunities created by investments such as the £250million Derry and Strabane City Deal, the new Graduate Entry Medical School at Magee, and the transformative projects taking place as part of our Urban Villages initiative.
“We want to create prosperity for all the people in this area and I very much look forward to seeing the economic and community benefits delivered for all.”

Her First Minister counterpart, Paul Givan of the DUP, added: “As work begins on the Ebrington Hotel, I’m pleased to mark another step forward, not just for the Ebrington site, but for Derry itself. It continues to grow as a vibrant, modern city which is looking to the future with confidence – and there is a real sense of that optimism here today.

“Derry is a place to work, a place to invest, a place to study and a place of leisure. It is a destination regionally and nationally, and – perhaps most importantly – on the global map.

“Of course, all this takes a collective effort. It involves the Northern Ireland Executive and local government, together with businesses and a range of stakeholders across the community.

“I applaud the developers of the Ebrington Hotel for their investment in the city, and indeed everyone playing a role in creating a better tomorrow.

“While acknowledging the financial investment, it’s important to recognise the individuals and organisations which have contributed in so many ways with their time, creativity and energy.

“Alongside the Ebrington Hotel, we saw the development of Grade A office space and a hub for start-up businesses. As today’s ideas become tomorrow’s opportunities, I will be watching with interest as potential turns into reality for Derry.”

Hotel Developer Cecil Doherty was delighted with work getting underway and stated that 120 jobs would be created in Derry with the development.

He said: “Ebrington Leisure Holdings Ltd is delighted to announce progression to construction phase on The Ebrington Hotel and Spa.

“Our objective is to create and develop a four-star Hotel to cater for the ever increasing popularity of our City as a must visit, exciting tourist destination.

“The Hotel is set to open in June 2023. We are excited for its future specifically and the Ebrington site overall with our creation of 120 jobs locally along with the unique opportunity to repurpose and revitalise iconic historically significant buildings. Ebrington’s future is very bright.

“We look forward to showcasing our vision to the public in 2023.”