‘The key to peace is in the hands of the IRA’ 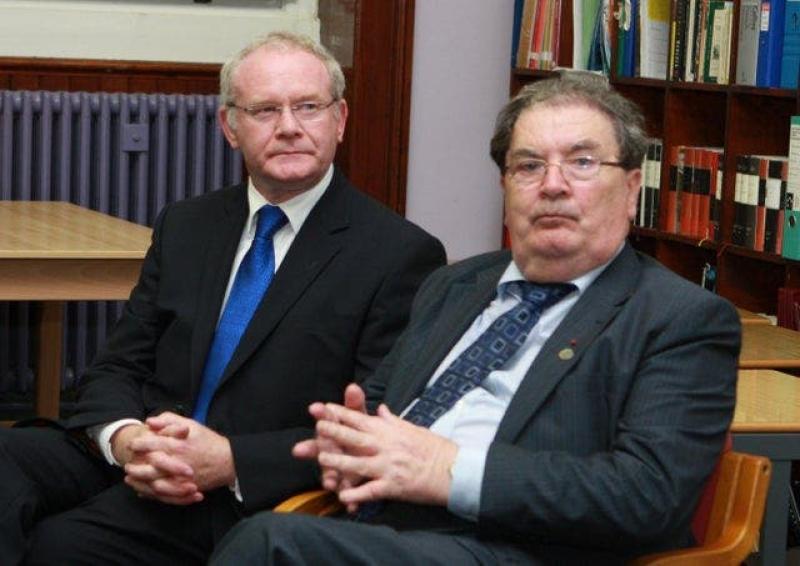 Martin McGuinness and John Hume were involved in peace negotiations with the British Government.

A Derry-based Troubles archive has made available previously confidential documents which shed light on negotiations between the IRA and British Government over an end to violence in the North.

One group of files detail private peace talks, the British Government’s recognition that a united Ireland should be decided by way of a democratic vote and Sinn Féin’s transition into mainstream politics.

The Conflict Archive on the Internet (CAIN) was launched in 1997 with the aim of providing information and source material on the 'Troubles' and politics in Northern Ireland from 1968 to the present day.

Since then CAIN has collaborated with the Public Record Office of Northern Ireland (PRONI) by digitising a selection of public records.

The documents, declassified in 2018, provide a glimpse into the inner workings of Downing Street during one of the most fraught periods in Northern Ireland’s history; a time when violence was still raging but a separate battle was being fought to secure peace.

At the centre of peace talks were Derry men Martin McGuinness and John Hume, both of whom have passed away in recent years.

In a parliamentary address at the end of 1993 then Secretary of State for Northern Ireland, Patrick Mayhew, alleged that a message had been sent from ‘IRA leadership’.

He named Martin McGuinness as the author - a claim the Derry man always disputed.

Dated February 22, 1993, the letter reads: ''The conflict is over but we need your advice on how to bring it to a close.

“We wish to have an unannounced ceasefire in order to hold dialogue leading to peace.

“We cannot announce such a move as it will lead to confusion for the volunteers because the press will misinterpret it as a surrender.

“We cannot meet Secretary of State's public renunciation of violence, but it would be given privately as long as we were sure that we were not being tricked."

In further correspondence the British Government lays out its parameters for talks saying that it cannot engage in the process with the purpose of achieving a predetermined outcome, whether it be the ‘ending of partition’ or anything else.

However, the British Government did accept that ‘the eventual outcome of such a process could be a united Ireland, but only on the basis of the consent of the people of Northern Ireland.’

“Should this be the eventual outcome of a peaceful democratic process, the British Government would bring forward legislation to implement the will of the people here.

“But unless the people of Northern Ireland come to express such a view, the British Government will continue to uphold the union, seeking to ensure the good governance of Northern Ireland, in the interests of all its people, within the totality of relationships in these islands,” Mr Mayhew said.

The IRA sent a reply on May 10 which did not constitute the unequivocal assurance of a ‘genuine end to violence on which we had insisted’ and a temporary ceasefire was unacceptable to the British Government.

The IRA resumed contact on November 2 when it expressed displeasure at the British Government’s rejection of talks between John Hume and Gerry Adams.

These talks lasted eight months and remained secret until April 1993.

The Hume-Adams Talks restarted in the early 1990s and were said to have led to Sinn Féin accepting the need for unionist consent about Northern Ireland’s future.

The newly digitised files on CAIN include an IRA message sent to Downing Street in November 1993 saying: "This problem cannot be solved by the Reynolds Spring situation, although they're part of it.

“You appear to have rejected the Hume Adams situation though they too are part of it.  Every day all the main players are looking for singular solutions.  It can't be solved singularly.

“We offered the 10 May.  You've rejected it.  Now we can't even have dialogue to work out how a total end to all violence can come about.

“We believe that the country could be at the point of no return.

“In plain language please tell us through (the link) as a matter of urgency when you will open dialogue in the event of a total end to hostilities.

“We believe that if all the documents involved are put on the table - including your 9 paragrapher and our 10th May that we have the basis of an understanding."

A response was issued a few days later describing the IRA letter as one of ‘greatest importance and significance’.

It said there could be no secret agreements or understandings between Governments and organisations supporting violence as a price for its cessation and its call on them to renounce for good the use of, or support for, violence.

The British Government wrote: “There can also be no departure from the constitutional guarantee that Northern Ireland's status as part of the United Kingdom will not change without the consent of a majority of its people.

“You ask about the sequence of events in the event of a total end to hostilities. If, as you have offered, you were to give us an unequivocal assurance that violence has indeed been brought to a permanent end, and that accordingly Sinn Féin is now committed to political progress by peaceful and democratic means alone, we will make clear publicly our commitment to enter exploratory dialogue with you.”

It adds: “Exploratory dialogue will have the following purposes: (i) to explore the basis upon which Sinn Féin would come to be admitted to an inclusive political talks process to which the British Government is committed but without anticipating the negotiations within that process; (ii) to exchange views on how Sinn Féin would be able over a period to play the same part as the current constitutional parties in the public life of Northern Ireland; (iii) to examine the practical consequences of the ending of violence.”

In a parliament statement delivered on November 29, 1993, the NI Secretary of State says: “I promise the House and the people of Northern Ireland that, for our part, we shall not cease our efforts to bring violence to a permanent end.

“As my right Hon Friend told the House on 18 November if we do not succeed on this occasion we shall keep exploring again and again the opportunities for peace.

“Peace, properly attained, is a prize worth risks. If a genuine end to violence is promised, the way would still be open for Sinn Fein to enter the political arena after a sufficient interval to demonstrate that they mean it. Our message of 5 November again spelt that out.

“The key to peace is in the hands of the IRA.”

In December 1993, the Hume-Adams talks produced the Downing Street Declaration in which the British and Irish governments, led by John Major and Albert Reynolds, agreed to ‘uphold the democratic wish of a greater number of the people of Northern Ireland on the issue of whether they wish to support the Union or establish a sovereign united Ireland.’

The Good Friday Agreement would not be signed until April 1998.