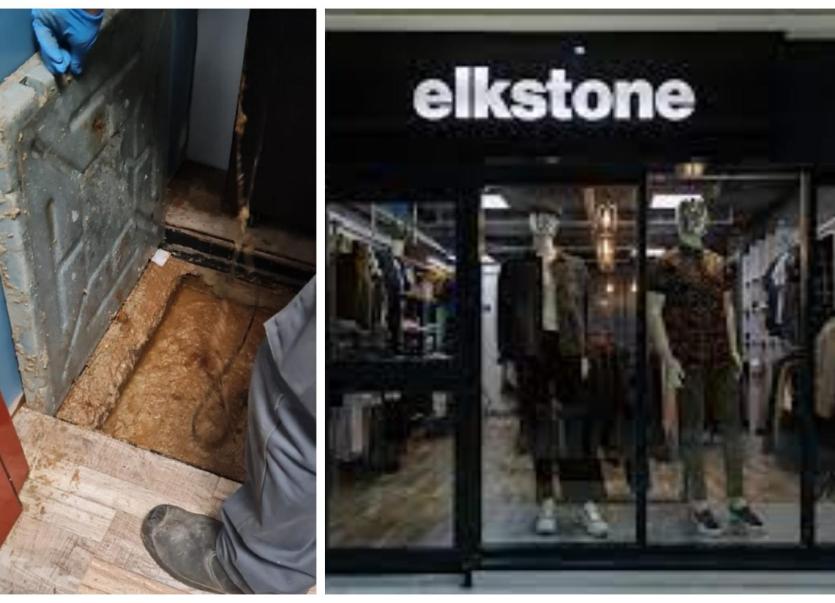 A Derry couple say they are living through a ‘bureaucratic nightmare’ as they attempt to recoup money lost after their new clothing store was ruined by raw sewage.

Local man Kieran Moore and his partner, Louise, set up their dream business at Lisnagelvin Shopping Centre in September 2020.

Combining his partner’s expertise in retail and his own in digital marketing they launched menswear store, Elkstone.

Business was going ‘really well’, they ‘hit the ground running’ and people complimented them on the store’s impressive layout and professional finish.

However, Mr Moore says their dream turned into a ‘nightmare’ in February of this year when, after a period in lockdown, they returned to find it ‘covered in raw sewage’.

The sewage came up through a latch on the ground which Mr Moore says was not properly sealed.

As a result, he says, over £30k worth of stock was made worthless overnight as it could no longer be sold.

He explained: “We have been the collateral damage of two giants, Tesco and the managing agents for Lisnagelvin Shopping Centre, CBRE.

“Our store was destroyed by a massive sewage problem that both parties refuse to take responsibility for.

“We made it out of the other end of the pandemic healthy and ready to expand, until the sewage problem at Lisnagelvin shopping centre destroyed over £30,000 of our stock.

“It’s been four months since the incident. The centre refuses to sort the sewage problem, they haven't tried to negotiate a contract for us to stay and no one has compensated us for our losses.”

His store sat to the rear of the shopping complex and, he says, the sewage which surfaced into his store came from Tesco, with the flushing of ‘blue roll’ blamed in part.

Mr Moore contacted Tesco and CBRE asking them to compensate him for the lost stock.

While prepared to stay at first, he now says that the situation has dragged on too long and he can’t justify pumping more money into the store at Lisnagelvin.

He said: “The stress is too much.  We decided to wash the clothes and give them to some local charities as we weren’t legally allowed to sell them any more and it would have resulted in reputational damage.

“CBRE are saying it is Tesco’s fault and I have to claim off them but Tesco is saying it isn’t their fault.

“It has been hell, we’re caught up in a bureaucratic nightmare.

In response to the allegations, a Tesco spokesperson said: “We understand the centre management and landlord are investigating the concerns.”

Meanwhile, a spokesperson for CBRE, who manage the centre on behalf of the landlord, said it is aware of the issues at the centre.

A spokesperson added: “The retail unit that was damaged has since been refitted at a cost to the landlord, and the matter is now currently with the relevant insurance teams and is in the process of being resolved.”

Elkstone is in the process of rebuilding and the local owners intend to open a new store on the Strand Road in the near future.