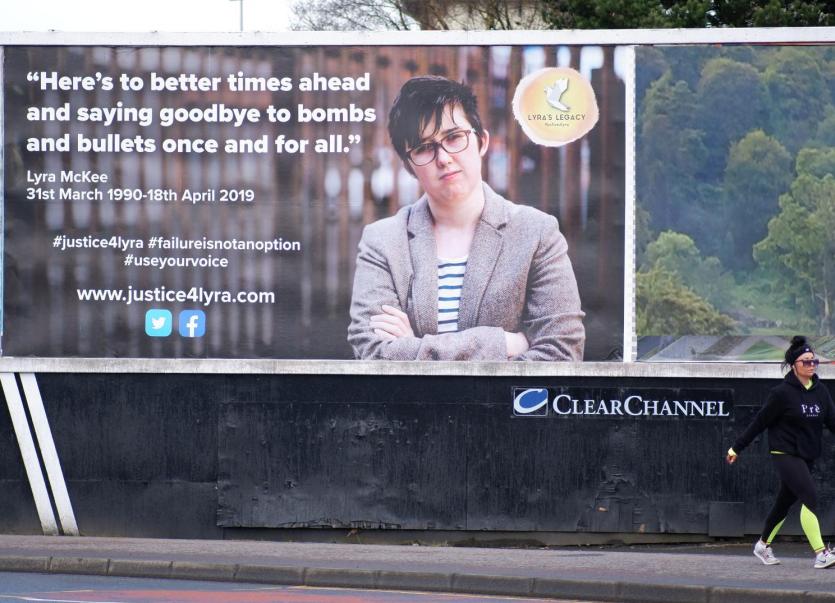 A billboard that has been erected in the Waterside area. Photo: Garrett Hargan

A sister of the late journalist Lyra McKee has made a heartfelt plea to those engaging in rioting at present to ‘stop’ before someone is killed.

Nichola McKee Corner knows too well the pain that can be inflicted on families in an instant, when the throwing of stones and petrol bombs escalates to the firing of bullets.

Lyra was shot dead by the New IRA as she observed a riot in the Creggan area of the city on April 18, 2019.

Her sister’s comments come after a week of disorder in Derry and just days before Lyra’s second anniversary.

Last night a bus driver was attacked with a petrol bomb in Belfast and violence subsequently broke out at a peace wall.

Across the North dozens of police officers have been injured and video footage has captured rioters engulfed in the flames of petrol bombs thrown by their friends.

In a strange twist of fate, a billboard with a powerful message from the late journalist has been erected in the Waterside area of Derry just yards away from recent trouble hotspots.

Speaking to the Derry News, Nichola warns: “For people involved in riots in a variety of places in our country presently, I would encourage them to stop before someone is killed.

“Apart from the people responsible for taking the gun out onto the streets on 18th April 2019, no one present would have anticipated a gunman opening fire during a riot.

“Yet this did happen and it killed our Lyra. I would encourage anyone involved in riots and other civil disturbances to stop and to engage in conversations with community leaders and politicians before it is too late.

“Destroying property and attacking people does not do anything to further a cause of any kind, in fact it does the opposite.”

She asks young people caught up in violence to heed her sister’s words which appear on the billboard: "Here's to better times ahead and saying goodbye to bombs and bullets once and for all."

The hoardings were put up at three locations in Derry ahead of Lyra’s McKee’s second anniversary on April 18.

It was a conscious decision to jog people’s memories.  “We had been planning to erect billboards since the end of January in advance of Lyra's anniversary,” Nichola explains.

“We wanted them to serve three main purposes: to share Lyra's inspiration for a society without violence; to remind people of the consequences of violence on our streets; and to awaken the consciences of those responsible for Lyra's murder and those who have information that could help us to secure justice for Lyra.”

Nichola, who is leading the family campaign for justice, has urged people to come forward with any information they have to the police.

“The gunman who shot Lyra has yet face justice. As a family, we are campaigning to bring Lyra's killer - and all those responsible in the events leading up to the murder of our baby sister - before the authorities.

“In May 2019, I personally appealed to the gunman at the end of the Belfast to Derry Peace Walk.

“I promised to meet him at any police station on this island as he handed himself in. Unfortunately, the gunman has yet to find the courage and moral integrity to take responsibility for killing our Lyra.

“Consequently, we have been left with no other option than to ask members of the public with information that could lead to his conviction to come forward and share any information that they have with the authorities.”

The McKee family is aware that 150 people shared information in the immediate aftermath of Lyra's death but suspect that in the ‘emotional chaos’ that followed, some very important information may have been mistakenly retained by witnesses.

“We have seen a lot of footage in the public domain which clearly shows that many people were using mobile phones to film the events in the Creggan on the 18th April 2019 and believe that someone must have footage that could assist the police,” Nichola adds.

She remains ‘very hopeful’ that the gunman who murdered Lyra will be brought to justice.

On her sister’s second anniversary, Nichola would like people to remember Lyra as an inspirational person who had unlimited potential; a person who would have helped anyone, spoke out for anyone who needed a voice and befriended people regardless of the label that society stamped on them.

The family recently launched their online campaign for information about Lyra's killer on what would have been her 31st birthday.

Justice4Lyra.com includes PSNI video footage from the night of the murder, Lyra's own work and tributes from friends.