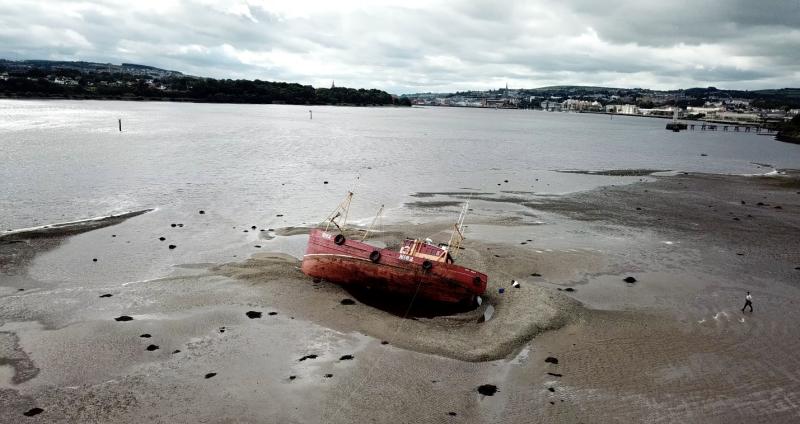 One of the owners of the much-talked-about boat on the River Foyle has appealed for help to get the stranded vessel back to sea.

Since the Derry News reported on Day Dawn N1 82 running ashore on August 22 locals have wondered who the mystery owners are and whether they’ll have her sailing the waters again.

Today they have shared their story of how the boat ran into difficulty when out for a test run and their plans to make it available to tourists at the Titanic Quarter in Belfast.

Nathan Ross from Dundrum in County Down and friend Druso Martinez de Riquelme from Marid in Spain own the old fishing vessel.

They have ambitious plans to moor the boat in Belfast.

Speaking to the Derry News, Mr Ross said he lived in Kilkeel for ten years, which is the main fishing port in Country Down, and Day Dawn is the fifth boat he’s owned.

As a self-employed plumber, builder and handyman, he described himself as ‘a Jack of all trades’.

Mr Ross said, contrary to reports, it was not him but the previous owners who bought the boat for a pound.

He took it off their hands for nothing as it was too big for the previous owner and various parts were not working.

Along with Mr Riquelme they have invested heavily in the boat, he said.

Mr Ross explained: “I have pumped about four grand into it, I’ve rewired it, added other parts and got the engine going.”

They took it out for a test drive and it was running fine for six hours.

Recalling the night it ran aground, he said it became stuck when a hydraulic hose burst and the boat lost steering power.

In an instant the owners faced a dilemma, either head towards the Foyle Bridge or the ‘safer option’ of turning towards the mudflats near the Bay Road.

Fortunately, the men emerged unscathed from the incident.

Mr Ross said: “I phoned in to let them know what was going on and then Foyle Search and Rescue arrived at the scene.”

It has remained stuck on the bank for the past eight weeks, suspended above a ‘three and a half metre’ hole that is visible when the tide is out.

The owner has tended to it throughout that time.

Plans have been formulated to dig a channel that would allow the boat to refloat.

This fell through when the person offering help requested a considerable fee.

The owner has since considered renting a digger to do it himself.

Mr Ross also said he has airbags that could be put underneath to lift the boat.

“I’ve been taking care of the boat.  I’m down every couple of days and if anything goes wrong I’m able to get updates.

“It’s not as if I’ve abandoned the boat.

“The boat is not taking on water, the only reason she’s over on her side at times is because the tide’s not high enough.”

(On Wednesday the boat appeared to be in a more precarious position and images show that it is taking on some water.  Mr Ross spoke to the Derry News on Tuesday).

He says that it will be able to take to the seas again once a starter motor arrives.

“It has been floating, the starter only went there about three weeks ago.

“I missed the first high tide because it was taking on water initially and I wanted to get that sorted out.

“It’s not costing me anything where it’s sitting and I was able to work on the engine and sort out all the electrics.”

The owner has asked ‘half the country’ to assist him by tugging the boat out to no avail.

He has sought help from harbour and port authorities who didn’t want to put expensive boats at risk in efforts to refloat a £1 vessel.

But Nathan insists the boat is worth ‘way more than that’ as the engine alone costs £12,000.

“If I wanted I could break that boat down and make money.”

But the intention is, he confirmed, to turn it into an Ait B ‘n’ B and have it based at the Titanic Quarter in Belfast where two other boats are moored for the same purposes.

Mr Riquelme runs an Air B ‘n’ B house and he came up with the idea, while Mr Ross is the renovator.

“We’d rip her right down to the hull and build it up again,” Nathan said.

“There’s nothing on that boat I can’t fix myself.  It’s not leaking oil as someone had suggested, it’s sitting in a three and a half metre hole full of black mud.

“The Harbour Master has checked it all.

“We’ll take it up to Belfast once it gets going and if we can’t get it in there we’ll just put it into one of the small ports to do work on it.”

They have asked anyone who can to help them.

He said: “Because I’m not from that area, if it was up here, if I had two farmers with tractors they’d be able to pull it in for me.

“The boat is not rotten, the beams are 20 inches thick.  All I need is a wee bit of help to slide it on in.

“Two big tractors would go on there no bother when the tide is out.  That boat is about 50 tonnes and it’s not sinking in it.”