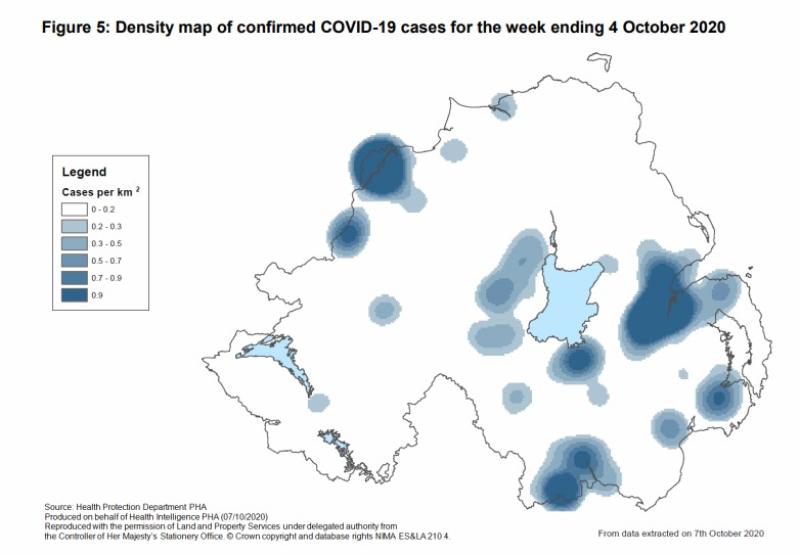 The Chief Scientific Advisor in the North has confirmed that a decision was taken to close the hospitality sector in Derry and Strabane because half of ‘known clusters’ originated in that setting.

However, when asked to provide details of where the other half of known clusters came from, the Public Health Agency (PHA) said it cannot share details of every incident due to confidentiality concerns.

A PHA spokesperson expanded: “We do not comment on individual cases of COVID-19 or go into the detail of every incident that emerges, as this could lead to people being identified, create stigma and focus attention on individuals, families or groups, and therefore deter others with symptoms coming forward to be tested.”

Derry City and Strabane is under tighter restrictions due to a surge in positive cases.

Hospitality businesses are limited to takeaway, delivery or outdoor dining and drink-only pubs to serving outdoors.

Hospitality Ulster says the grant scheme announced for businesses in the North West, whereby small businesses will receive £800 for every two weeks they are closed and larger businesses £1,200 for two weeks, cannot get to businesses quick enough.

Colin Neill, Chief Executive, Hospitality Ulster added: “Hospitality businesses are fighting for survival especially in the Derry and Strabane area, and while this financial package will help some, for many it will still not cover all the bills which need paid.

“After the pressures of the last six months, it is no exaggeration to say that for many, money has simply run out.”

Data collated by the end of last week underpin this decision.

He explained: “In Derry and Strabane, of cases reported in the fourteen days up to October 2, 29% were associated with household transmission, 16% with known clusters and 55% with community transmission.

“Of those cases which formed part of known clusters, more than half were acquired in the hospitality sector.

“Community transmission includes cases which have been acquired as a result of close contacts outside the household, and therefore includes a wide variety of settings, including the hospitality sector.

“As community transmission increases, it becomes increasingly difficult to pinpoint where individual Covid cases are acquired in most cases.

“The vast majority of cases were acquired in unknown settings – this inevitably will includes the hospitality sector among other locations.”

The Department of Health commissioned a contact survey which assessed the number and location of relevant contacts by a representative sample of the NI adult population.

It found that 44% of contacts occurred in a household setting, and the second largest identifiable category of contacts was in a social setting (20%), consisting mainly of contacts in the hospitality sector.

Professor Young continued: “Contacts in the hospitality sector tend to be closer and longer than contacts in many other settings, and in addition mitigation through the use of face coverings is generally not possible.

“Therefore these contacts are likely to be of higher risk than contacts in other settings. Alcohol consumption will also be a factor in failure to comply with social distancing.

“It made sense to focus in the first instance on contacts in household settings – given the extent of these interactions and the fact they can’t be monitored or individually regulated.

“That was the first lever to pull. In light of the present surge in Covid-19 cases, other levers are likely to be needed.

“It will be for the Executive to decide how best to proceed, while also seeking to mitigate adverse consequences for society and the economy.”