At John Hume's funeral yesterday a message was read out on behalf of his son, Aidan, in which he said the 1965 university campaign served as a catalyst for his father’s career in politics 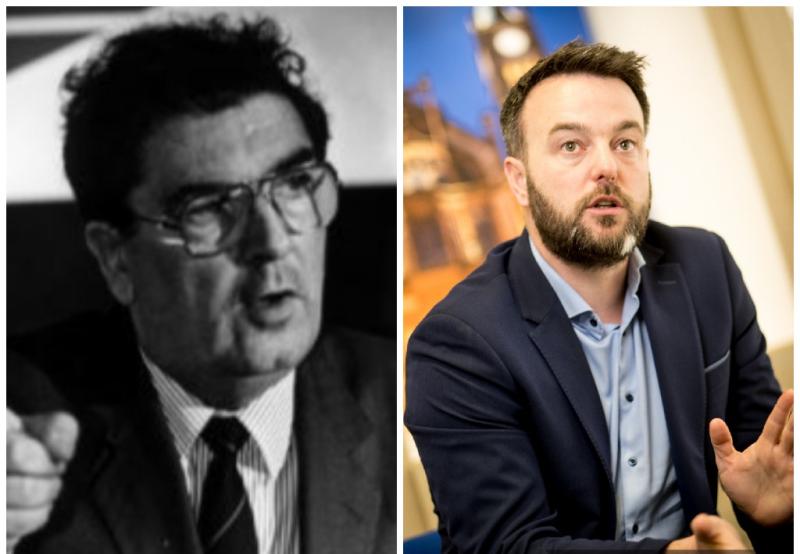 SDLP leader Colum Eastwood has said that he will endeavour to finish the work started by John Hume 55 years ago by delivering a ‘full-scale’ university in Derry.

At his father’s funeral yesterday, a message was read out on behalf of Aidan Hume in which he said the university campaign served as a catalyst for his father’s career in politics.

In 1965, the Lockwood report recommended that Northern Ireland's second university be sited in Coleraine rather than Derry.

It was viewed as a controversial decision at the time and highly contested in the city.

That same year a cross-community campaign was led by John Hume, the unionist mayor Albert Anderson and Eddie McAteer, leader of the Nationalist Party.

At yesterday’s funeral a message was delivered by Hume’s daughter, Mo, on behalf of her brother Aidan who couldn’t travel from the United States due to the coronavirus pandemic.

In it, Aidan said that using a moral compass as his only tether his father’s ‘perseverance and sheer will’ brought ‘hope and history’ together.

“It began with the corrupt siting of the university, driven by a total lack of respect for diversity,’ he added.

The university campaign acted as a prelude to the civil rights movement and was part of a building of frustrations felt by Derry people.

Ultimately the protest had no impact on the final decision but it may have saved Magee campus, which had been earmarked for closure.

Eamonn McCann, civil rights veteran and former neighbour of Hume, believes it was the university campaign that set the tone for the former SDLP leader’s style of politics in the decades to come.

At this stage people will be familiar with the motorcade to Stormont in protest over Lockwood's decision, he added.

But he says, as significant, was a Guildhall Square rally ‘jammed with people’ where a youthful John Hume spoke not of ‘unionist discrimination’ but of the need for ‘togetherness’ to bring about reform.

“There really you have the microcosm of his politics and strategy for the rest of his life, it was all there.”

In 1993 a Peace and Conflict Studies course was formed at the Magee campus in Derry, an internationally renowned programme offered by leading academics from the International Conflict Research Institute (INCORE).

In recognition of Hume’s peace-building efforts, Ulster University announced funding for the John Hume and Thomas P. O'Neill Chair in Peace, to be established at the Magee campus.

Set up in honour of both politicians, the Chair is a full-time academic position in peace and conflict resolution studies which helps to train the next generation of peacemakers from around the world.

Presidents and leaders from around the world, including Bill Clinton and the Dalai Lama, spoke to audiences at the campus.

However, there was widespread concern in Derry when a decision was made to relocate the course to Belfast a number of years ago.

Current SDLP leader Colum Eastwood said that throughout his life, John Hume stood up for Derry and all its people.

“He understood the transformative impact of education and knew all too well the structural inequalities forced upon the people of this city,” he said.

“John campaigned for university provision in Derry that could deliver the skills and opportunities our people need to grow and prosper, even against the backdrop of a campaign of violence that plagued the lives of those in the city.

“Delivering on John’s vision for Derry is a priority for me and for the SDLP. I am committed to ensuring that everyone in this city has the opportunity to make a live for themselves here.

“John's lasting legacy should be that we never allow our young people to be raised for export.   Derry needs a full-scale university, nothing else will meet the needs of our people.”

Meanwhile, the Derry University Group (DUG) which has been lobbying for an independent university in the city described John Hume as one of the greatest educators and thinkers the city has known since Colmcille.

Garbhán Downey of the DUG said: “He taught us of the importance of a university as a centre of learning, industry, science and arts, heritage, philosophy and discourse; as the focal point for community engagement, and the lead agent for positive change and self-empowerment

“He worked throughout his career to establish a university here to serve as the bedrock for the new, peaceful society of equals, which he had envisaged for Derry from his earliest days as a social champion.

“The campaign to build a university, begun by John Hume sixty years ago, is still unfinished. It has been described as the last remaining civil rights issue.

“There could be no more fitting legacy to John Hume than for his home city to finish this job now.”