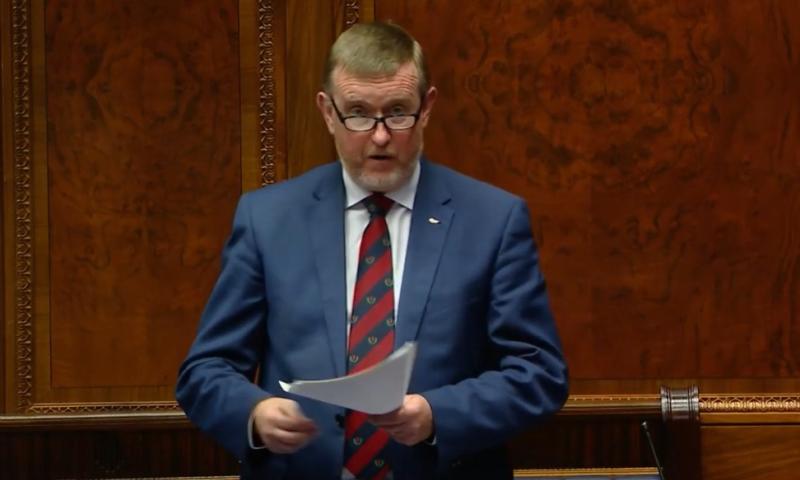 A DUP MLA has challenged the finance minister about the decision to prioritise a medical school at Magee over the recruitment of police officers.

Last week Deputy First Minister Michelle O’Neill announced that a Medical School at Magee had been agreed by the Executive with an anticipated September 2021 opening.

However, SDLP leader Colum Eastwood amongst others sought further detail saying student intake next year was ‘far from certain’.

Speaking at a Stormont debate on the Budget Bill this week, DUP MLA Mervyn Storey - a member of the Northern Ireland Policing Board - challenged the way finances have been distributed.

To fulfil the commitment made to police officers in the New Decade, New Approach document would cost £40m per year, he said, which the finance minister has available.

He continued: “There are those who would like the Police Service of Northern Ireland to be run into the ground and be so constrained that would be incapable of dealing with public order and the many challenges that it faces.”

The North Antrim MLA and former finance minister said £15m was allocated to the new medical facility in Derry.

“When anyone looks at the current estimates for the running - the capital and the resource - of that project, the cost will be in excess of £30 million.

“Some people are hanging their hats on the City Deal providing the additional money, but there is no doubt that it will have recurring costs that have to come back to the Executive,” he added.

Mr Storey went on to say that a ‘deal is a deal’ and in the New Decade, New Approach document there is an agreement to fund a medical school, and, on the opposite page, a commitment to increase police numbers to 7,500.

It leads to the question, he said, what was the process to remove the medical school from the Department for the Economy and the Department of Health and move it to the Executive Office?

“Why did that happen, given the fact that responsibility for the delivery of that project lay primarily in those two departments?”

In response Sinn Féin Finance Minister Conor Murphy said: “First, in relation to the PSNI bid and the member's view that it was part of a deal.

“If it was part of a deal, it is not the responsibility of the Finance Minister to go in and demand that the Justice Minister brings forward a proposition. There is a party leaders' forum, which, I think, was set up as a consequence of NDNA in order to discuss issues that might be outside the day-to-day workings of Departments.

“If there is an argument that that commitment is not being met, I suggest to the member that that is the area in which to raise it and, hopefully, then secure an agreement. I am more than happy to play my part in that.”

With regard to the Magee campus and Ulster University situation, the finance minister said there was a ‘time pressure on agreements’ that needed to be made about matched funding of the inclusive future fund and also about the intake for the graduate-entry medical school.

“There was a lack of agreement between both departments on which one would have lead responsibility for that.”

He concluded: “In those circumstances, correctly, the Executive Office and the offices of the First Minister and deputy First Minister stepped in to try to arbitrate and find a way through that.

“That is how it ended up in that department.”

During the sitting, SDLP MLA Sinead McLaughlin said she met with senior representatives of Ulster University and left the meeting with the sense that they were in the dark about what happens now in terms of progressing the business case for the medical school.

“We need to know what is going on. We need more detail, and we need greater transparency. That applies to the British Government's plan for Brexit, but it also applies to the plans of our Government, the Executive Office and senior officials when it comes to the Magee medical school.

“The medical school is due to open its doors in September 2021.

“Like every other elected representative and everybody in the city, I was delighted by the announcement, but a lot of work needs to be done for that to take place. It needs to be done very quickly, with a sense of urgency, and I urge the joint First Ministers to proceed at pace.”

Sinn Féin MLA Karen Mullan commented: “You have two Derry representatives speaking one after another.

“The recent announcement of match funding for the Derry City and Strabane strategic growth plan and inclusive future fund, alongside the Executive commitment to open the medical school at Magee, are examples of what can and should be done.”