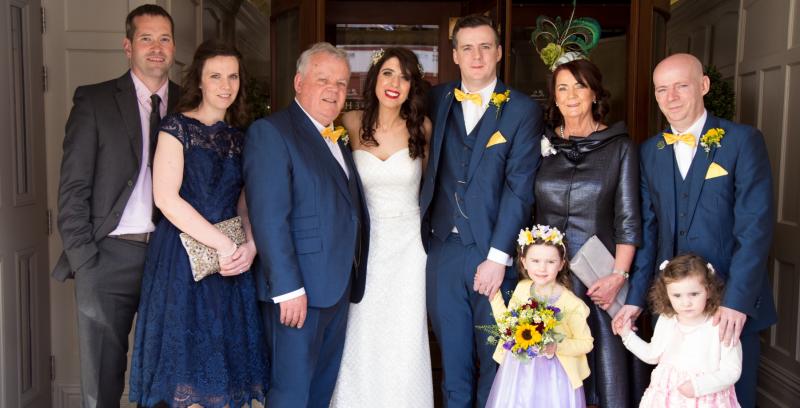 The family of East Derry MLA John Dallat said they had been ‘overwhelmed’ by the tributes paid to him following his death last week.

The well-known local politician died after a period of illness.

Observing social distancing, many lined the roads leading to St Mary’s Church, Drumagarner as the cortege made its way into a church that parish priest John Cargan said should be full.

Many of his party colleagues were not able to attend due to the Covid-19 regulations and instead posted tributes online.

John was hugely admired and respected throughout the community in East Derry over the course of his 40-year political career.

He became the first nationalist mayor of the old Coleraine Council in 2001 and won the respect of fellow councillors with his forthright determination.

SDLP councillors on the current Causeway Coast and Glens Borough Council, where his daughter Helena serves, expressed their sadness at his passing.

They said: “We have been privileged to have John as our mentor and role model. John worked tirelessly for everyone in our community and fought for justice for many.

“He was a well-respected politician with very strong values and will be sadly missed by each and every one of us.

“Our thoughts and prayers go to our colleague Helena her mum Anne and brothers Ronan and Diarmuid and the wider family circle.”

A teacher by trade, he taught at St Paul’s College in Kilrea for 23 years before being elected to serve in the Northern Ireland Assembly in 1998.

His commitment to the community was steadfast and he is widely credited with rejuvenating the Kilrea, Rasharkin and Dunloy Credit Union, which was in danger of closing.

John was a champion for the underdog, something he said was ‘second nature’ to him while growing up.

When a young African student was due to be deported after her visa had run out, he took her into the family home and supported her in extending her stay for a further two years.

He was dogged in his pursuit of justice for what he described as the ‘dreadful murder’ of Inga-Maria Hauser, the German backpacker whose body was found in a remote part of Ballypatrick Forest, near Ballycastle, Co Antrim.

When the family announced they would no longer be returning to mark her anniversary, John took up the mantle of remembering her every year at the forest park.

John held the post of Deputy Speaker in the Northern Ireland Assembly for ten years and also served on the Public Accounts Committee with what Colum Eastwood described as ‘forensic skill’.

“As a public representative, John struck fear into the heart of anyone who dared misspend a penny of public money,” said the SDLP leader.

“I know I speak for everyone in the party when I say his good humour and wise advice will be sorely missed.”

Following his death, tributes were paid across the political spectrum. First Minister Arlene Foster said he was ‘always to the fore in speaking up for his constituents’.

UUP MLA and Deputy Speaker Roy Beggs said he spoke for all the assembly when he said John would be ‘sorely missed’.

Family was fiercely important to John and Fr Cargan told his funeral that, despite the pressures he encountered, he never allowed it to affect them.

He said: “He encountered those who preferred darkness to light because their deeds were evil.

“These threats put his family life under immense strain and it is to his credit that he never allowed this pressure to diminish the equality of life enjoyed by the family.”

John’s family said they had been ‘overwhelmed’ by the volume of the support they had received following his death.

They said: “We would like to express sincere gratitude to the many people who have provided comfort to our family at this sad time.

“We wish to thank the hundreds of local people who observed social distancing and lined the route of the funeral cortege to St Mary’s, Drumagarner, Kilrea. There are no words to adequately describe how moved we were.

“These are unkind circumstances to lay anyone you love to rest but so many people made it a lot easier and more dignified than it could have been.

“We have been overwhelmed at the volume of calls, messages, social media posts and touching tributes to him. We thank everyone for taking the time to express condolences and for sharing memories and anecdotes.

“We are indebted to the dedicated healthcare workers. We will be eternally grateful to so many incredible people for their support, in particular, Ciara our amazing NI Hospice nurse, our GP Dr McCormack, consultants Dr Stewart & Dr Mullan from the NW Cancer Centre and Dr Diamond from the Mater.

“Our selfless district nurses who provided craic as well as first-class treatment, the very appropriately named “carers” and the Marie Curie nurses. All of them somehow make each family in their care feel like they are their only priority.

“He put up one of the bravest and most humbling fights, in much the same courageous, tenacious way that he lived his life. We are filled with pride at the number of people he has touched.”

Described by Fr Cargan as a ‘man of light’, John Dallat’s determination and passion for helping others has left a lasting imprint on the community in East Derry and on all who knew him.