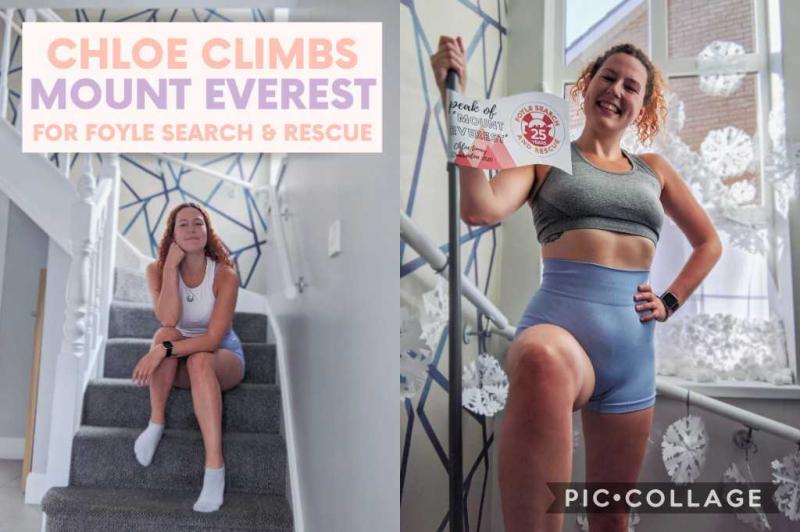 A Derry woman yesterday completed a mammoth lockdown challenge by scaling the equivalent of Mount Everest in her home in aid of a local charity.

Chloe Tinney (22) has now set her sights on the real thing with plans to climb an ‘actual mountain’ in future.

She managed the epic feat in 10 days to raise funds for her ‘heroes’ at Foyle Search & Rescue.

The 22-year-old devoted herself to the task by dividing her time wisely between her full-time job and conquering the stairs.

Her ascent got underway on April 27 and it has been gruelling climb ever since.

She has been hampered by a niggling repetitive strain injury to her knee along the way which was attributed to the left turn in the stairs.

This meant she had to use a crutch for the vast majority of the challenge and cut out the turn to avoid aggravating the injury further.

An astounding £1,993 raised so far for Foyle Search & Rescue more than six times her original target.

Speaking after reaching the summit yesterday, she said: “My leg injury has been feeling slightly better so I have been able to do the last 2 days without use of my crutch which is making it so much easier.

“I also think my body has adapted to having to walk up stairs for 3 - 4 hours a day, every day because I am finding it easier every day.

“That being said, I can't say it is something I will keep up,” she joked. “I can't wait to be done and have a little rest, maybe eat a pizza and have a glass of wine to celebrate being done with stairs.

“Maybe I'll climb an actual mountain when this is all over (I've never climbed a real mountain before believe it or not, yet…)

“I am genuinely so taken back and actually quite emotional about the generosity of everyone towards me during this time. From donating money to the amazing FSR, sharing posts, offering encouraging words, and so much more. Thank you just isn't enough.

“I know the donation to FSR will mean so much to so many people and will definitely be put to amazing use to help all the folks at FSR continue to be heroes in our city.”

Donations will remain open for another three days, if you would support her cause visit: https://www.crowdfunder.co.uk/chloe-climbs-mount-everest-from-her-home