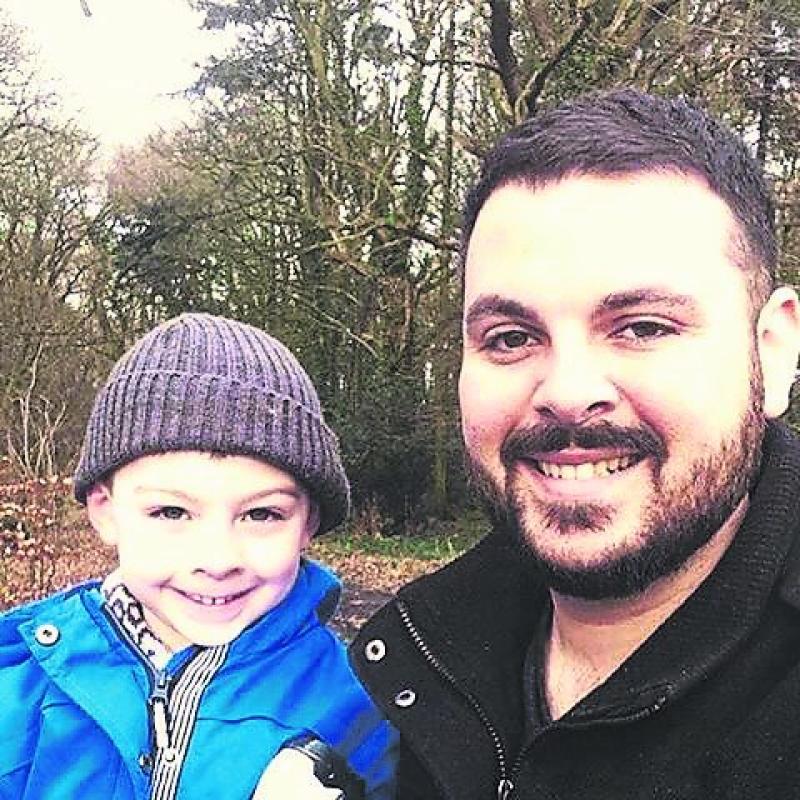 Derry author Jude Morrow should be in America right now launching his debut book about being an autistic dad, instead he is in Derry working on the frontline as a social worker with the elderly.
Although he loves his day job, you can forgive the father of one for feeling disappointed.
His book tour was the stuff of dreams, with a guest lecture at Stanford University and a book sign at Barnes and Noble in San Mateo, California, and had been months in the planning.
"You only get one debut book release and that's it," he says.

Jude's story is all the more remarkable given that his book 'Why Does Daddy Always Look So Sad' was first self published just last May.
By October his searingly honest account of being autistic and being a father had been snapped up by 'Beyond Words' the same American company that published worldwide best selling self help book 'The Secret'.
Jude says he wrote the book for his son Ethan, now 6, to show autstic people's lives can be every bit as happy and fulfilled as those not on the spectrum.
The title of the book came from a question Ethan, who is not autistic, asked Jude's mum when he was just three.
Jude started writing the book to record his childhood and journey into fatherhood, after realising that most of the books on autism focused on children, not parents.

"It was a bit of a bucket list thing, to have a book published before I was 30," he says.

"I wanted to make a record of my early life and Ethan's early life.

"I'm proudly autistic now but that wasn't always the case.
"I used to try and hide it."
After sending it off to a string of literary agents with no success Jude published it himself and it went on to earn a string of five star reviews on Amazon and attracted the attention of one of the world's leading consultants on autism, Maisie Soetantyo.
'Why Does Daddy Always Look so Sad?' also caught the eye of an American literary agent who took it to 'Beyond Words Publishing'.
Impressed by Jude's warts and all story which detailed  his childhood struggles, through to adapting to becoming a parent they agreed to launch the book in the US with a speaking tour.
"'Beyond Words Publishing' get submissions from all over the world but they only publish about 10 books a year so for them to publish my book is just unbelievable," says Jude.

"I never in my widest dreams thought this was going to happen.
"The publishers said the book resonates with people because it's not about swimming the channel or climbing Everest, I'm just a normal, relatable person.
"I'm remarkably unremarkable but they thought it was important to get my story out there."
For the past eight months Jude has been working closely with his publisher to plan the promotion of his book.
"They are eight hours behind me, so I would be finishing work at 5pm and they would just be starting," he explains.
But with the outbreak of the coronavirus all the carefully laid plans have had to be scrapped.
"It's in the lap of the gods, but I just don't want it to vanish without a trace," says Jude.
"I want to out it in front of as many people as possible."

Growing up different
Jude, who grew up in the Bogside before moving to the Waterside, says he knew from a young age that  he was different.
"I have never felt not different," he says.
"Obviously I have always been autistic, and I always would have been aware too that other children would be out playing games or playing in the street and I spent most of my time alone."
Jude recalls spending hours lining up his toy cars on the window sill of his childhood home in Gartan Square.
By a stroke of luck the flat recently came up for sale and Locate Estate Agents agreed to let him come and have a look around.
"That was magic," says Jude.
"The atmosphere was still the same.
"I could just imagine my mammy and my daddy there and my wee sister Emily tottering about
"I rang up Locate because I'm a chancer and said 'I've written this book and it's out all over the world and a lot of happened there'.

Growing up Jude went to the Model School Derry, Oakgrove and St Columb's College.
"I had a lot of help and support and at the time I was resentful of it, but I look back more fondly at it now," he says
There were no autism support groups in the city at that time, so when Jude was a teenager he joined cross community youth group Reach Across.
His lazer focus and love of order were put to good use helping to organise activities and grant applications and at 18 he was invited back to the group as a leader.
This led him on to a Social Work degree at Ulster University, Magee.
"The boy who has social difficulty ended up being a social worker," he smiles.

Becoming a dad
Jude said he used to perceive autism as something that he had grown out of.
He had a successful job as a social worker and was able to navigate life well.

But becoming a dad at the age of 23 threw his carefully ordered world into disarray.
"Instead of cherishing and celebrating this wee baby I was more preoccupied with 'where's my sense of control?," he admits.
When Ethan was three he asked his granny the heart wrenching question 'why does daddy always look so sad?', which was to become the title of the book.
"He was able to pick up that I wasn't happy or that I found things difficult," Jude explains.
"And he still knows when I'm not happy.
"He's 6 now and he knows that I like things done a certain way.
"I have a lot of buttons and he has lots of wee fingers to press them with," he laughs.
So was Ethan's question the catalyst that turned Jude into the perfect father?
"No, that would be far too easy," he sighs.
"It wasn't a lightbulb moment."
Embracing being autistic and fatherhood was a gradual process that has continued after the publication of the book.
"I had to give in and accept I was autistic.
"I would have said 'i have autism' but I have become more educated and listened to autism voices and they would say they are autstic, not that they have autism.
"It's not a handbag or an accessory that you have.
"It's an intrinsic piece of someone.
"I used to think in my own head 'I have a condition', but it's the way I am.
"It's not something fatal or that needs treatment."
Judes view of autism has come full circle and he now regards it as a blessing.
"To me it's an advantage and to a lot of autistic people it's an advantage.
"Autistic people are the most passionate and driven individuals.
"If it wasn't for autstic people there would be no fire, no wheel, no electricity, no music, no arts, nothing!"

Reaching out
Since publishing the book last year Jude has given a series of talks and book signings which have given the 29-year-old social worker  the chance to reach out to autistic children.
"I love meeting autistic kids.
"They are like me and I am like them.
"I'm not in the business of giving parenting advice and when I give a talk to parents it's always the kids who ask the questions.
"There's a misconception that autistic kids don't know they are different.
"I want to tell them that things will be grand."
He has also been contacted by people from around the world who have been touched by his story and he has encouraged anyone with questions to get in touch with him online.
"I reach out to people all the time and I have a black belt in responding," says Jude.
'Why Does Daddy Always Look so Sad?' is available on Amazon in both paperback and ebook.
For more information see www.judemorrow.com or the Jude Morrow Author page on Facebook.