'The silent epidemic which is killing Derry's youth'

The problem of addiction in our city is so huge that people are afraid to face it head on. 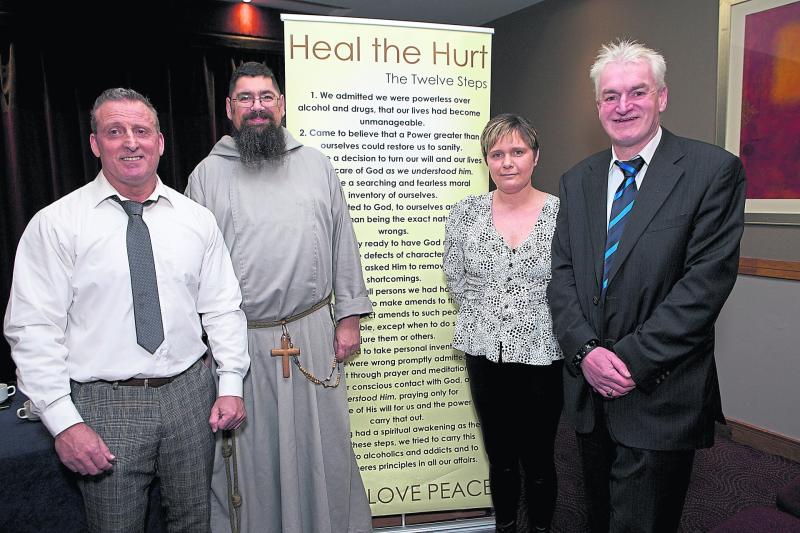 The problem of addiction in our city is so huge that people are afraid to face it head on.

That is the view of Liam Stewart, psychotherapist with 'Heal the Hurt', who hosted a public meeting at the City Hotel last Wednesday evening in another bid to highlight the problem that is affecting families throughout Derry and beyond.

Heal the Hurt offers counselling to those suffering addiction to alcohol as well as prescription and recreational drugs. Therapy services are provided via group and one-to-one counselling sessions and the organisation also provides educational talks, and has done, since opening three and a half years ago.

Derry MLA Martina Anderson was in attendance on what was an emotional night in the City Hotel, with those affected by addiction asking a question which Liam has heard time and time again – 'what can we do?'

Liam, who has lost members of his own family to addiction, described addiction as 'a silent epidemic'.

“It's too big. What are they going to do with it?” he explained.

“Addiction is frightening. Every second person is taking something but where do they go for help?

“They have to wait a year and a half if they go to their doctor for a counsellor. What are you going to do for a year and a half waiting. We give a lifeline here. It's not a drop in centre. You start your treatment here, right away. This is a professional organisation.

“You are made very welcome, with no condemnation, no judgement and no labels put on you.”

Liam also expressed his opinion that the statistics don't tell the whole story when it comes to death from addiction.
“They say 20 people die a month from suicide in Northern Ireland,” he continued.

“On Spotlight the other night they said that the majority of them had substances in them.

“There have been 24 people who have been in my room who have died, but because they went and committed suicide, so it goes under suicide, not addition.

“I believe that if they tallied up the real true numbers, be it a drunken driver who is an alcoholic, it would be much higher.

Gather up the real statistics and let's sit down and talk about them and what money they are putting into mental health.”

Liam hosted the public meeting at the City Hotel in a bid to again highlight the fight that many families in Derry are fighting alone and his message was clear – 'This problem is not going away'.

“I would ask any politician a simple question – can you tell me what you're doing about this?”, he asked.

“Can you tell me anything about it?

“Everyone was invited to the meeting but only Sinn Fein turned up. Other politicians didn't and they have been asked.

“The people in the meeting are suffering when the politicians they vote for are not there. There were people there crying and looking for support, their representatives should have been there to support the local people.”

Weekly meetings
'Heal the Hurt' hosts meetings three times a week at Northside Shopping centre, where people of all ages and experiences come together to share their struggles.

“The camaraderie in such circumstances can be a huge healer to those walking through the door, be it for the first time or tenth time.

“We need to drop the word 'blame', because everyone has a part to play in this, but are we going to keep sitting back and watch our youth die?” Liam continued.

“Heal the Hurt will not change the world, but we have changed the world for many people and that's what keeps us going.

“We have 14 people here on a regular basis and we are making progress. Do we need more help? Absolutely. We need more people to come along to the meetings.

“It's just sad. The parents are going out of their mind so what do we do? The hospitals are over run, and the stress and abuse they get is just not on.”

At Wednesday's meeting, Victor Deans and Caroline Dean shared their stories of addiction and recovery, insisting that the help provided by 'Heal the Hurt' was invaluable.

“That last meeting was the best we've had in three and a half years. The questions from the student nurses and the public, it was amazing the interest they had in addiction. We've already had several private mails asking when the next one is, so there's a need for it.

“The more support we get and the more parents come and ask what they can do for their children, and vice-versa – I can't answer all their questions, I need politicians to come in and help me, I need other professional agencies to come in and join together for a way forward. Together we are making a difference, but it's slow.”

'Heal the Hurt'
Anyone that wishes to speak to Liam Stewart about helping Heal the Hurt or learning more about the services provided by the organisation should call 07783910072.