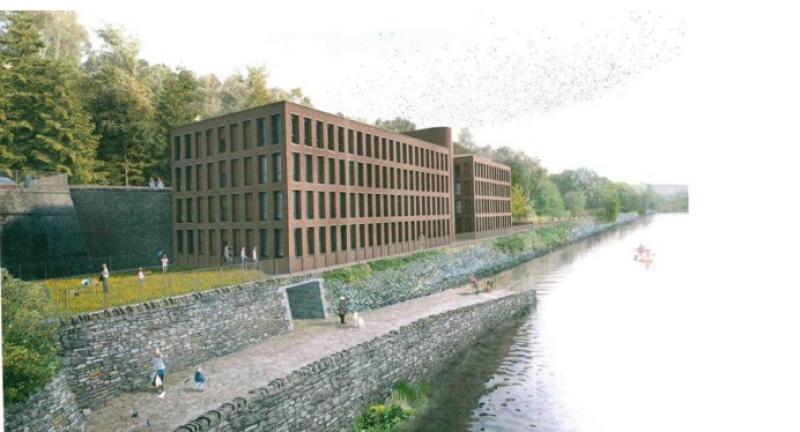 A planning application for social housing on Derry’s riverfront has been refused after councillors raised concerns about a no parking scheme 'discriminating' against people with disabilities.

Following the decision, the applicant Clanmil Housing Association, said it was ‘very disappointed’ and would consider the full range of options moving forward.

The application was for the erection of a four-storey building comprising of 39 two-bedroom apartments with rooftop amenity space, new access arrangements from Victoria Road, servicing and drop off provision, bin stores, cycle parking, landscaping and associated site works.

The Council’s planning department recommended that committee members approve the application with an officer saying it was 'entirely compliant'.

It was described as 'possibly the most difficult regeneration site in the city', which was originally given planning approval in 2000.  It sits 22m below the level of the Victoria Road and is boxed in by the River Foyle and perimeter walls with limited accessibility.

The application received a total of 35 representations, 34 objections and one letter of support.  Of the total, 13 related to the amended design which incorporates a glass tower separating the two blocks.

In the report it is noted that the primary objections to this development are no parking provision for residents and the adverse impact of congestion on Victoria Road caused by vehicles turning in and out of the site.

Developers proposed that there would be no parking on site, aside from operational parking, such as bin lorries and emergency services.  CCTV monitoring and barrier operation would be automated for 24-hour operation.

Planning officers said it will reinvigorate riverfront land and put an end to anti-social behaviour at the site.

The natural brick was chosen to better complement the stone finish of the historic Ice House - which sits adjacent - and provide a contemporary building as recognition of the industrial heritage of the wider area.

Around two stories of the building would be visible from the Victoria Road and you would see the building from lands opposite on the Foyle Road.

Speaking at the meeting, Hugh Hegarty from the Victoria Park Residents Group raised a number of objections.  He described the design as a 'horrific brutalist East German style eyesore' .

He said pollution and parking problems would be exacerbated if residents were to park on Spencer Road and Duke Street.  Mr Hegarty believed Clanmil Developments would later apply for parking spaces.

A lack of space in the area has already resulted in 'hazardous parking' on Victoria Road.  He envisaged problems at the site with numerous couriers and taxis arriving.

The local resident questioned how it would work allowing only one vehicle on to the site at a time if other vehicles were waiting.

'Mistakes' have been made in the past with the BT building and others near Derry’s riverfront and he hoped the planning committee wouldn’t be remembered for this 'carbuncle'.

In response, an agent representing Clanmil said the development would go some way to reducing the housing demand in Derry with around 2,500 people on the waiting list.

He refuted the suggestion of a future application for car parking saying that was 'absolutely not the case' as there will be a zero parking solution on site and people would manage deliveries.

Housing applicants would be made aware that there is 'no car ownership' in this scheme.  It is a 'highly accessible' location with bus stops and train travel nearby, he added.

The agent also contended that the design respects the history of the site, the city’s shirt factory heritage and complements existing buildings.

Above: Artist's impression of the building from Foyle Road.

Alliance Councillor Philip McKinney who is a lorry driver said it would only take one heavy goods vehicle (HGV) to block the Victoria Road and there would be massive tailbacks.

“At the best of times it’s absolutely horrendous, it would only take one timed delivery to go wrong and traffic would be down past the Everglades Hotel.”

He was assured there would be 'no disruption' to traffic on the Victoria Road and told there’s enough room for one vehicle if the barrier was down.

SDLP Councillor Angela Dobbins said she normally had 'brilliant things' to say about Clanmil but on this occasion believed that the no parking clause 'discriminates' against disabled applicants.  “Disability Action will have a lot of issues with this development.”

She added: “You’re saying, people can have an apartment with lovely views overlooking the Foyle as long as they’re not disabled or have complex needs.”

In terms of parking on Duke Street and Spencer Road, she said it has a one hour parking restriction and asked if residents would be expected to park after 6pm.

The Ballyarnett Cllr suggested Clanmil needed to be 'educated'.  While acknowledging a “housing deficit”, she said, people need quality housing, a quality life, quality access and disabled people should have the same rights as everyone else.

A Clanmil representative said a range of accommodation is needed and people with complex needs are allocated houses by the Housing Executive.

Meanwhile, Sinn Féin Councillor Patricia Logue, said no distinction should be made between applicants and homes are allocated on a points-based system.  “Those with the highest points are given first offer and refusal.”

Disabled tenants may have carers who have to visit them three times a day.  She warned that Clanmil could be taken to the Equality Commission over the scheme as some people need a car and can’t be treated differently to those who don’t.

Chair of the committee, Christopher Jackson, echoed her views saying those waiting years on homes shouldn’t have to choose between a home or their car.

People Before Profit Councillor Shaun Harkin voiced the need for housing but believes it has to be done right.  He said: “Representatives are trying to create a more accessible city and district for those with disabilities.”

He wasn’t convinced about the aesthetics of the building and insisted that the 'beautiful' riverfront must be regenerated appropriately.  “It looks to me like a car parking facility, I don’t mean to insult the designer.”

Cllr Dobbins proposed that members do not accept the planning officers’ recommendation and refuse the application on grounds that it is contrary to access and movement and because of the design.  “It does not allow people with disabilities to be included in a social housing scheme,” she concluded.

Seven councillors voted in favour of her proposal, none against and there were four abstentions.  The application was therefore refused.

Afterwards a Clanmil spokesperson said: “Whilst we acknowledge the thinking of committee members, this city centre scheme could help address urgent housing need in the Waterside area.  “This decision is therefore particularly bad news for families who desperately need a home.

“We are considering the full range of options available to us and will decide on a way forward shortly.”