A Derry man has raised £30,000 for a charity which is very close to his heart 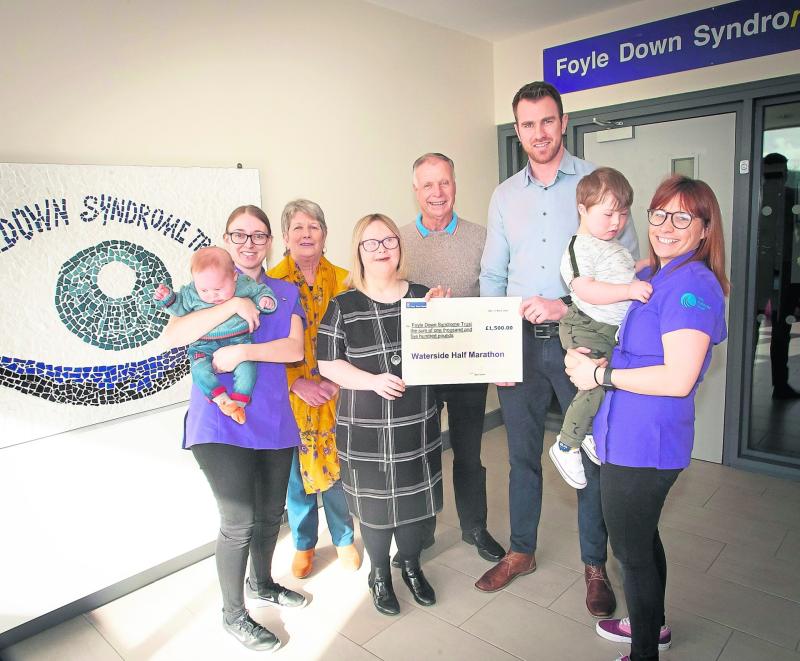 Ms. Laura Duddy presenting a cheque for £1,500 to Christopher Cooper, manager, Foyle Down Syndrome Trust, proceeds of monies raised by her father Billy (at back)

A Derry man has raised £30,000 for a charity which is very close to his heart.

Over the last 20 years, Galliagh man Billy Duddy has organised and taken part in a wide range of fundraising events for the Foyle Down Syndrome Trust (FDST).

Billy was inspired into action by the support the charity has provided for his daughter Laura, who has Down Syndrome.

Billy's latest sponsored run in the Waterside Half Marathon raised another £1,500 for the local charity, bringing his overall total raised to around £30,000.

However, Billy, who is 72 years-old, has decided to finally hang up his running shoes.

“I’ve ran most of the Waterside Half Marathons and every year I’ve been bowled over by the generosity of so many people who never fail to amaze me with their kind donations,” he said.

“It would literally take a book to thank all the many who have contributed over the years.

“Just yesterday, I got a cheque for £200 from Eugene Duffy, chair of the County Derry Boxing Board to add to the total.

“He told me the monies were raised at the County Derry Amateur Boxing Board’s Championships in November and he handed it over to what he said was a ‘very worthwhile cause.’”

Lovely gesture
He recalled another story of getting a donation from a Dundalk FC supporter.

“Peter Gosling was at the Derry City-Dundalk FAI League Cup final and won the half-time draw, a £100.

“Peter told Brian Dunleavey, organiser of the draw, to donate the money to the Foyle Down Syndrome Trust through myself – a truly lovely gesture.”

Billy and his family have been involved with FDST since its inception at Spencer Road, Waterside.

He said he is proud of the Trust and what it has achieved over the years.

“It is fantastic to see the new facilities now for the young people coming through and we, as parents, are proud of what the Foyle Down Syndrome Trust has done for Laura and indeed, the many other children and young people who come through their doors.”

“Billy has been a stalwart supporter of FDST over two decades. Indeed, he has been here since the start.

“He is a devoted supporter of everything we do here,” added Mr Cooper.