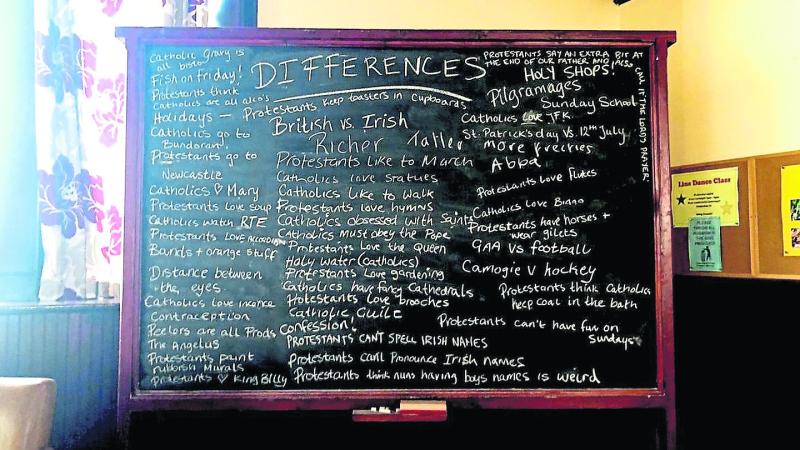 The blackboard which featured in Derry Girls is now the centrepiece of the new exhibition.

'Culture Lab: Don't Believe The Sterotypes' is a collaboration between Belfast's Ulster Museum and Derry's Nerve Centre and aims to show that history and identities can be more complicated than they first appear.

The blackboard comes from the stand out scene in series two of Derry Girls, where teenagers from both sides of the community were asked to list the differences between Catholics and Protestants.

It struck a chord with local viewers who took to Twitter in their droves to agree or disagree with writer Lisa McGee's ideas.
Nerve Centre Project Manager, Niall Kerr, said the blackboard was the perfect fit for the exhibition, which aims to challenge preconceived ideas about the two sides of the religious divide.

"We didn't want it to be a traditional exhibition, we wanted something playful that would challenge stereotypes and once the Derry Girls episode with the blackboard aired we were quite keen to have it.

"Ulster Museum opened up discussions with the production company [Hat Trick Productions] and we were lucky enough to get it.

"It was the perfect fit for us because wanted people to think about identity and not just in that binary orange and green way."

'Culture Lab: Don't Believe The Sterotypes', which opened last Friday, also includes a tongue-in-cheek interactive quiz  based on the lists on the blackboard which will tell you what percentage Protestant or Catholic you are.

The 'religious stereotype calculator' asks if you like flutes and soup and if you holiday in Newcastle, Co Down or Bundoran, Co Donegal.

"It's about exploring the sterotypes and breaking them down," said Mr Kerr.

"It asks do you keep your toaster in a cupboard and if you have ever been to Sunday school and then it gives a general assessment if you are from one side or the other,” he added.

"Everyone at the exhibition really enjoyed it and a lot of people were taking pictures of their results and posting them online."

'Culture Lab: Don't Believe the Stereotype' runs at the Ulster Museum until November and it is hoped it will come to the Nerve Centre Derry in a planned tour of border communities.

Plans are also underway for the 'religious stereotype calculator' to be made available online so that people from around the world can take part in the quiz.