“Couples who dance together stay together”

A Derry couple who have been dancing together for 62 years say it is the secret to a long and happy life. 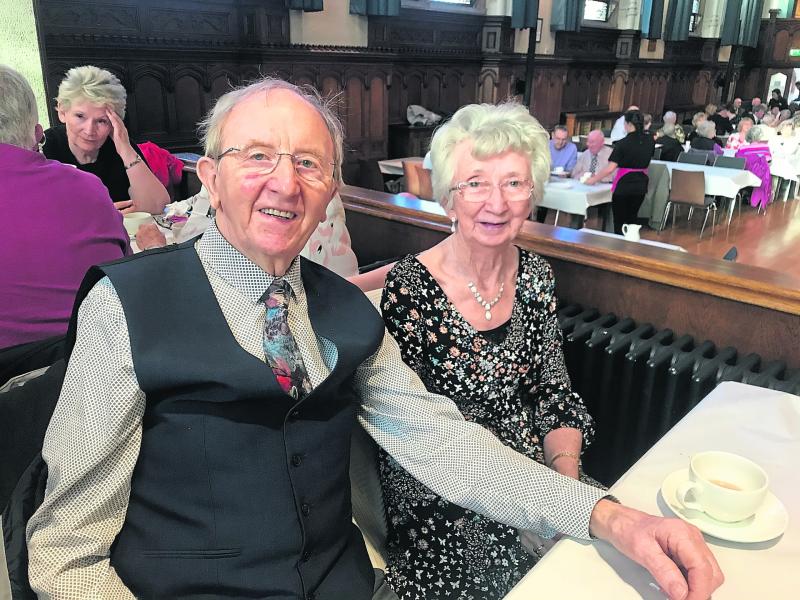 Jim and Myra Boyle enjoying the latest Mayor's Tea Dance in the Guildhall. The couple say dancing has always been an important part of their relationship.

A Derry couple who have been dancing together for 62 years say it is the secret to a long and happy life.

Jim and Myra Boyle attend the Mayor's tea dance at the Guildhall every month, and have been dancing partners since the late 1950s.

But although the couple have a shared love of dancing their eyes didn't meet across a crowded dance floor.

"I met Myra in a chip shop at 2 o'clock in the morning," laughed Mr Boyle.

"I knew of her already and I asked her out.

"I remember she turned up with three or four of her mates."

During their two year courtship, Mr Boyle spun Mrs Boyle around the floor of every dance hall in the north west.

"We used to go to Borderland, the Corinthian, the Lourdes Hall, the Memorial Hall,  the Plaza and the Ritz," he recalled.

"We would go out on a Friday, a Saturday and a Sunday and the floors would be packed every night. It was a great era.

"You had to go out that was the only way to meet up, you couldn't bring a girl round to the house.

"You'd have to go to the pictures or go for a walk."

The smitten couple went to great lengths to see each other because Mr Boyle lived in Lishally while his sweetheart was from the city.

"We walked everywhere so we used to go out with our dancing shoes under our arm," said Mrs Boyle.

Very few people had cars and a night out could involve all manner of transport, especially if you were going to Borderland in Muff.

"Myra got the bus to Enagh Lough and I would walk her in to the Red Cross Bar and then we would get the boat across from Lisahally to Culmore and then walk from Culmore out to Borderland," said Mr Boyle.

Jim refused to let living out in Lisahally get in the way of his social life.

"I used to stick my galoshes [waterproof shoes]  in a hedge and pick them up on the way home," he recalled.

"I got a lift on a motorbike a few times and I went on the back of lorries with pigs in them."

It could be scary walking down the Lough Road at night because it was pitch black.

"I used to say you'll never see anybody as long as you walk backwards.

"You had to know every street in Derry too.

"Because if you offered to walk a girl home you had to know how far it was going to be."

The Derry girls were well known for their sense of style and were always impeccably dressed.

"They were always very well turned out," said Mr Boyle.

"The Derry ladies were always dressed up.

"That's the only thing that has changed is the dress," said Mr Boyle.

"In those days you wouldn't have got in without a collar and a tie.

"There was no turning up in jeans and a oul top.

"You used to see the girls walking around on a Friday with their curlers in.

"Sometimes if they asked you out they would say 'no, I'm washing my hair'.

"That was a handy way of refusing."

Dancing was a big thing for people of all ages in the city and most of them were self taught.

"You might have had an older sister who would show you the steps, or you would teach yourself pushing off a door handle," said Mr Boyle.

Mr and Mrs Boyle both recall the 'excuse me' dances where someone could cut in and take your partner.

"It was mostly your mates who would cut in," Jim recalled.

"You had to rescind to them and give them your lady friend.

"There were strict rules about the style of dancing too and how close you could get to your partner.

"You weren't allowed to jive unless it was a jive session, and you couldn't dance too close to your partner," said Mrs Boyle.

"The parish priest would come along and tap you on the shoulder if he thought you were too close, whether you were married or not.

"A girl could get a tap too. I remember getting one at the Whitehorse when we were married."

And the couple, who have been wed for 62 years, have no intention of hanging up their dancing shoes any time yet.
"We can't stop now we would seize up," joked Mrs Boyle.

"It's much better than sitting in the house," agreed Mr Boyle. "The doctor should put it on prescription, dancing gets you out and exercising and talking to people."