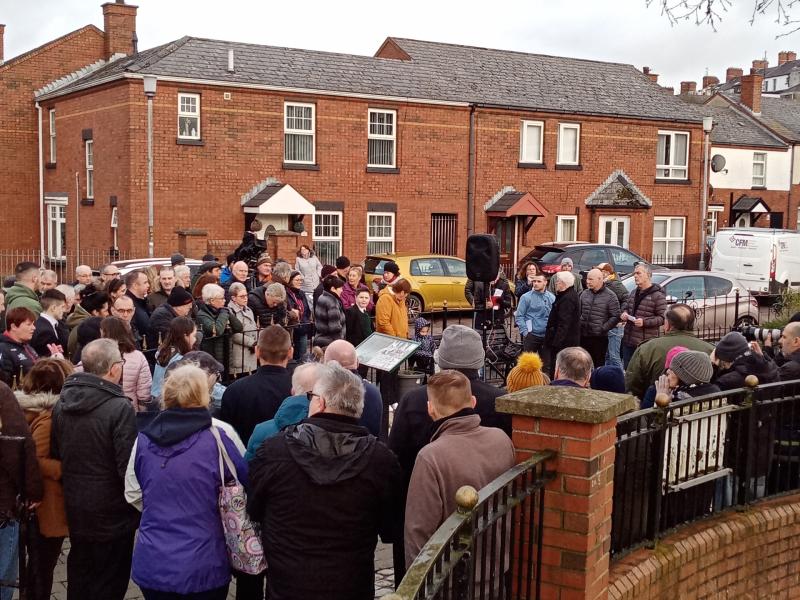 Families of those killed on Bloody Sunday have marked the 48th anniversary of their loved ones by calling for the trial of soldier F to be held in Derry and vowing to continue their fight for "justice".

A crowd assembled in front of the Bloody Sunday monument on Rossville Street at 4pm where the names of those killed and wounded were read out. That was followed by a minute’s silence.

Floral tributes were then laid in front of the monument.

Thirteen innocent civilians were killed outright by British paratroopers while attending a civil rights march on January 30, 1972, while the death of another man four months later was attributed to his injuries.

Speaking at today's memorial event, John McKinney, brother of William McKinney who was killed on that day, said that it was a day of mixed emotions when the Public Prosecution Service (PPS) announced on March 14 last year that “only one soldier, soldier F would be prosecuted for the massacre on that day.”

The ex-paratrooper is being prosecuted for the murders of James Wray, 22, and William McKinney, 27. He is also facing four attempted murder charges, plus an additional support count in respect of the attempted murder of a person or persons unknown.

While welcoming his prosecution he said they are “bitterly disappointed” and “extremely angry” that more soldiers are walking away “Scot free”.

At soldier F’s most recent court hearing families heard that his trial may be moved to Belfast as Bishop Street courthouse is "unsuitable".

The families demanded that soldier F face trial in Derry where the killings took place. Older family members will be physically unable to travel to Belfast and others will have work commitments.

“The security of the families must also be a priority, a trial in Belfast is likely to attract protesters or even more sinister elements. It is imperative that it happens without fear or intimidation for families and witnesses involved.

“We have been told that the real reason for relocating the trial is to accommodate more people and improve security measures, we’ve been told by the PSNI that they will be able to maintain security better if it’s kept in Derry.”

Time is of the essence, he said, as he urged decision makers to hold the trial in Derry.

Mr Mckinney added that they would fight the “disgraceful” attempts to introduce an amnesty for British soldiers.

He also highlighted the findings on Gerald Donaghey saying the PPS and Saville were wrong to conclude that he was “probably” carrying nail bombs as they were planted on him. “On this point we will never, ever give up.”