“Our bursaries are paid from this money. We receive no public sponsorship of any sort, our income is from private sources. It's just natural wastage and we just can't keep it up. We can't afford it anymore” - Pat MacCafferty, music secretary with Derry Feis, on the future of the annual event. 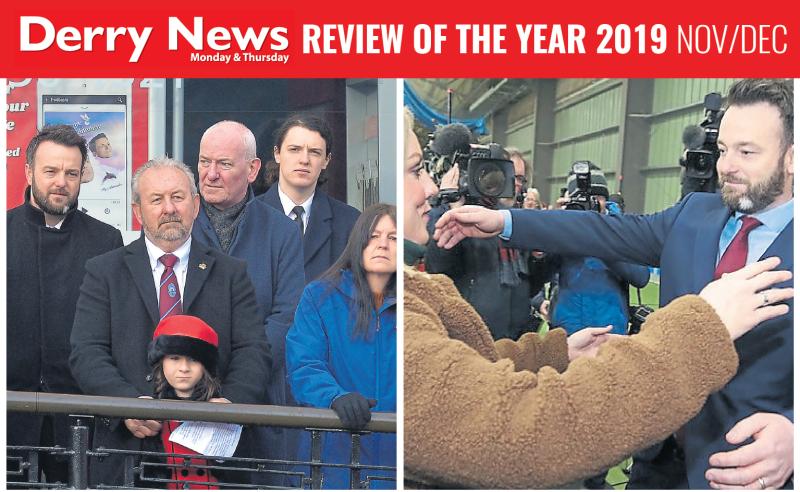 Derry group unveils plans for new NW university
The group which has been lobbying for an independent university in the North West shared its ambitious vision for a new third level institution in Derry.
In a briefing document exclusively seen by the Derry News, the Derry University Group (DUG) outlined its proposals for a “university of the region, for the region.”
It plans to transform the city into a campus by making use of the Fort George site with Letterkenny IT and the North West Regional College also affording a new university space. Other venues across the North West will include the main community cultural hubs in Derry (Ráth Mór, the Shantallow Forge and St Columb’s Park House), and larger venues such as St Columb’s Cathedral, the Alley Centre in Strabane, the Waterside Theatre, the Nerve Centre and St Columb’s Hall in Derry city centre.”

Gritting service withdrawn after attack on workers
Essential gritting services were withdrawn from the Ballymagroarty area of Derry after youths attacked one of the Department for Infrastructure’s road-gritting vehicles.
Local councillors called for an end to such “mindless attacks,” saying that it was the community that ultimately loses out on “vital” winter safety services.
The Department took to social media to explain why the area had been removed from the gritting schedule.

Derry Feis in fight for survival
Feis Doire Colmcille, the city's oldest and most vaunted cultural event, was in a fight to reach its 100th anniversary because of increasing monetary pressures, the Derry News revealed.
Next year, Derry Feis will celebrate it's 98th year in existence but prominent members of its organising body have said that they had been forced to make hard decisions about the future of the beloved event.
Whilst the overall interest in the Feis and competitor participation continues to be very strong, the crippling costs of paying for venues to stage the festival of music, song and dance is jeopardising its very existence.
The senior members of Derry Feis Committee also levelled criticism at Derry City and Strabane District Council for what they said was a lack of help in sustaining the event which first took place in Easter Week 1922.
Music secretary Pat MacCafferty said: "The Feis has been running at a loss of around of £8,000 a year and our past savings are running out fast.
“Our bursaries are paid from this money.
“We receive no public sponsorship of any sort, our income is from private sources. It's just natural wastage and we just can't keep it up. We can't afford it anymore.”
Registrar Ursula Clifford told the Derry News: "I don't know how many meetings we've had with the Council.
“They promise the world but we get nothing."

Austins redevelopment inches closer
The iconic Austins building in Derry city centre was undergoing inspection to ensure that it was structurally sound ahead of plans for future redevelopment.
Remedial works to remove asbestos from the building were completed and the next step was to survey the building before detailed designs could be drawn up. Reoccupation will then be considered in due course.
Brendan Duddy, of the City Hotel Group, which owns the building, explained: “We’re getting people in there to check the entire structure, to carry out a proper survey of the building.
“We’ll naturally review that and then look at a way forward, we’re fairly confident that it’s in good shape but we have to look at it before we can decide on anything else."

Eastwood relcaims Foyle seat for SDLP
The SDLP regained the Foyle Westminster seat with a majority in excess of 17,000 votes.
In a remarkable victory. party leader Colum Eastwood amassed a total of 26,881 votes that equated to 56.7% of the overall poll in the constituency.
The margin of the victory represented not only the largest majority ever in the Foyle constituency but eclipsed the biggest previous majority won in 1987 by the SDLP's John Hume by some distance.
Mr Hume first won the the seat after its creation in 1983 and won with a majority of 8,148. But the former SDLP leader increased that majority to 13,860 four years later. Colum Eastwood's win surpassed that by 3,310 votes.
Outgoing Sinn Fein MP Elisha McCallion polled 20.5% of the vote (9,711) but the SDLP majority was 17,170.

Thousands declared homeless across Derry
Thousands of families were registered as homeless in the Derry and Strabane district in the run-up to Christmas, the Derry News revealed.
Figures provided by the Housing Executive showed that almost 3,000 families and individuals are waiting to be housed.
Local homeless charity, the Simon Community, also said it wass full to capacity and having to turn down new referrals.
Support services are working hard to ensure there was nobody sleeping rough at this time of year.
Eileen Best, director of operations at First Housing Aid and Support Services, said that homelessness was an issue in the North West but preventative services were on hand to offer support.
“We have services that work on preventing homelessness in the city, we have accommodation with support, we have floating support services and also the crisis response night outreach team who regularly patrol the streets to ensure that people who are rough sleeping are given a fast response.”

Nadine does Derry proud
Former Girls Aloud singer, Nadine Coyle, did her home town proud when she took part in the reality television show “I'm a Celebrity Get Me Out of Here.”
Nadine, who entered the jungle at 25/1 with the bookies to win the challenge, finished fifth after her odds were slashed to 9/1 after impressing viewers with her bravery.
The Girls Aloud singer did not shy away from any Bushtucker Trials during her time in the jungle and kept the spirits up in camp with her cheerful Derry wit.
She also helped her camp mates  to beat the jungle boredom teaching them  Girls Aloud dance routines and even confessing a secret crush on presenter, Declan Donnelly.
“There's something really cute, cheeky and sassy about him,” she admitted. 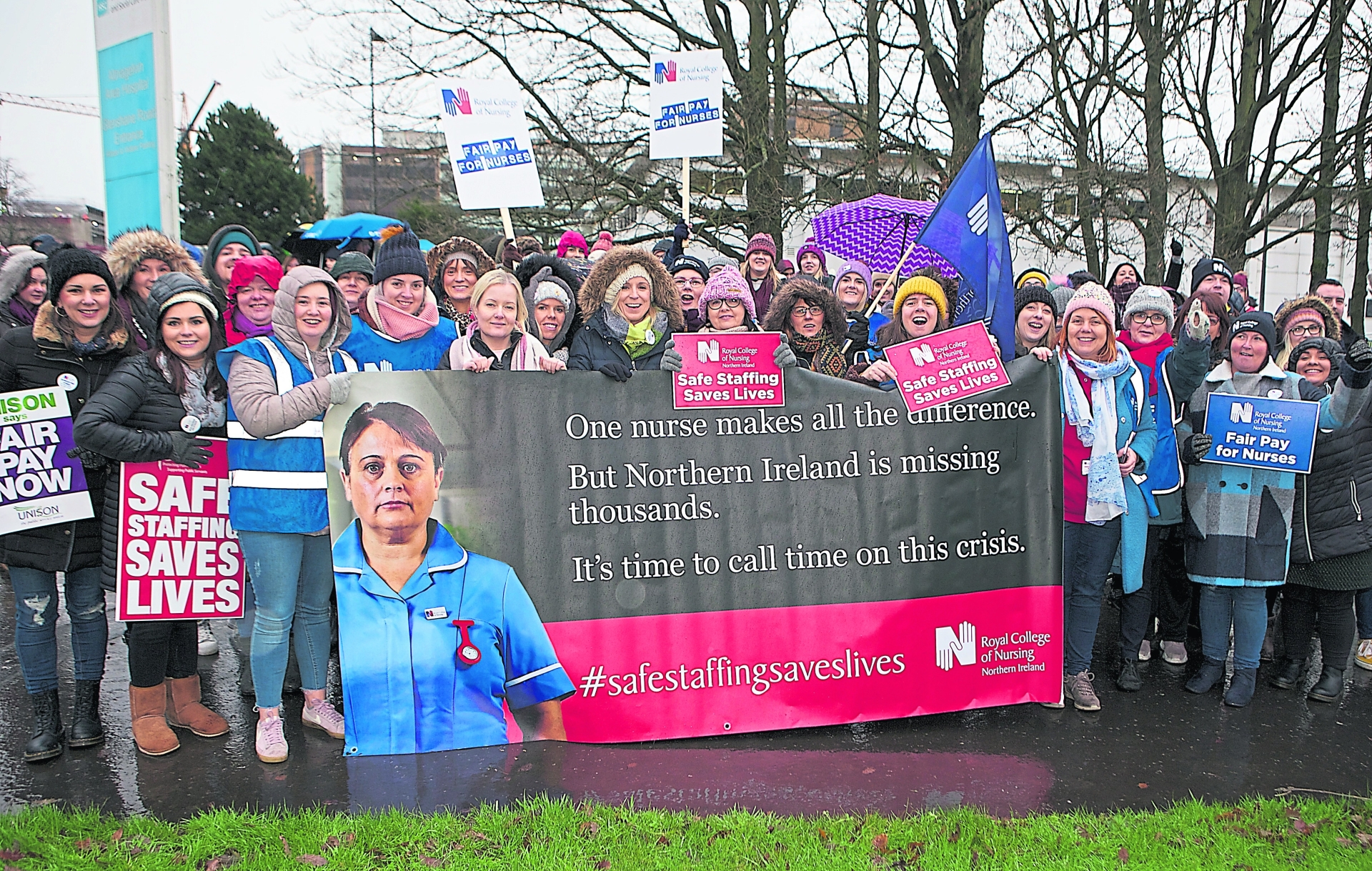 Derry nurses stage industrial action
Picket lines were in place across Derry when health and social care workers demanded safe staffing levels and pay parity with the rest of the UK.
Strike action proceeded as planned after last-minute talks between the North's five main parties failed to provide a solution as their calls for Secretary of State Julian Smith to intervene and restore pay parity went unanswered. The Northern Ireland Office has insisted it is a devolved matter.
Members of the Royal College of Nursing (RCN), UNISON, UNITE and NIPSA joined picket lines outside Altnagelvin Hospital, Gransha Hospital, Shantallow Health Centre, Riverview House and elsewhere.

Cassie captures the true spirit of Christmas
A kind-hearted Derry girl showed the true spirit of Christmas was giving, not receiving.
Cassie McLaughlin, a Year One pupil at St Cecilia's College, won £500 in the school's big prize draw.
But, instead of treating herself to the latest gadget, she decided to buy gifts for other teenagers who might be facing hardship.
"I talked to mammy about it and said I wanted to use some of the money to help other people, so she bought some gifts and donated them to the Family Support Centre," Cassie explained.
"My family has always taught me to think about other people and we are taught that at St Cecilia's too.
"I really enjoy being at this school and we've had a great time this Christmas."
Derry's Family Support Centre helps local families who have complex needs and may have poor outcomes in health, social interaction.   St Cecilia's principal, Martine Mulhern, said she was “absolutely delighted” to learn of 12-year-old Cassie's kind deed. "We were absolutely delighted when it was one of our own year eight pupils, Cassie McLaughlin, who won our Christmas big prize draw.