'I was never able to walk anywhere. I would have to park as close to the door as I could If I went anywhere. It took over my life” - Local woman Geraldine Glenn stating her 15 stone weight loss had saved her life. 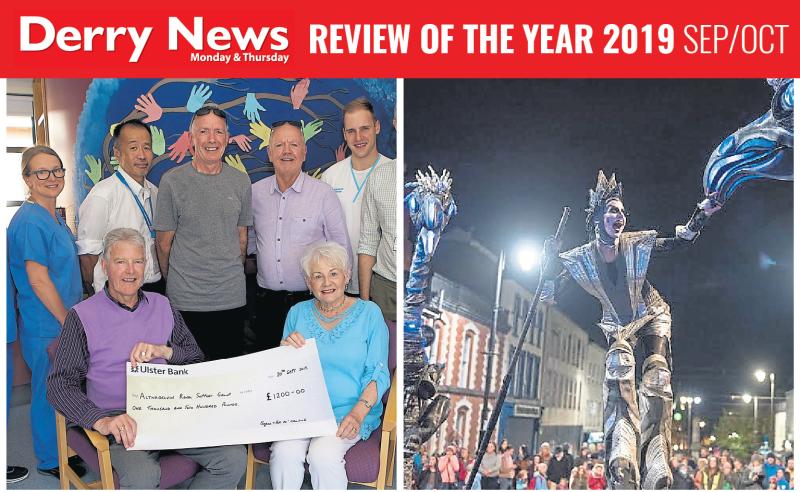 Passing of former Derry Bishop
Former Bishop of Derry, Most Rev James Hegarty, was laid to rest in the grounds of St Eugene's Cathedral.
The 79-year-old passed away in Letterkenny University Hospital after a lengthy illness.
Appointed Bishop of the Diocese of Raphoe in February 1982, he became Bishop of Derry following the retirement of Bishop Edward Daly in October 1993.
In November 2011, Bishop Hegarty resigned after revealing he had been diagnosed with "a condition which is, unfortunately, irreversible and progressive.
Tributes were led by Archbishop Eamon Martin.
He said: "I am grateful to Bishop Hegarty because for his encouragement and support to me as my bishop in Derry from 1994 until his retirement in 2001. He was unstinting in his support for my role as a teacher and president of St Columb's College."
Sinn Fein MP Elisha McCallion and SDLP leader, Colum Eastwood, were amongst those who paid tribute.

15 stone weight loss saved my life
A local woman who slimmed down by over 15 stone revealed how her stunning weight loss saved her life.
Geraldine Glenn shed the pounds over the course of two years and was speaking having maintained her target weight for a further three years.
Geraldine had battled with her weight for most of her adult life but had never found a long term solution. While overweight, Geraldine was limited in what she could do.
"I was never able to walk anywhere," she revealed. "I would have to park as close to the door as I could If I went anywhere. It took over my life. It affects your lungs, your heart, your joints - everything. I have a life now that is better than I cold ever have imagined."
Geraldine gained her target weight by attending a local Slimming World group.

New factory to create 100 jobs
It was announced 100 jobs were to be created over the next four years with a US engineering company opening a new factory at Campsie of the outskirts of Derry.
Terex Corporation, which manufactures equipment used in waste management, mobile conveying and recycling at the new site in which the company had invested £12 million.
Terex president, Kieran Hegarty, said 40 of the initial 100-job target had been filed and the company was hopeful of recruiting a further 60 in the next 12 months. He added: "A key reason for coming to the North West is an additional talent pool,"
It was estimated the new site factory would generate over £2 million in annual salaries.

'Soldier F' case adjourned
The case of "Soldier F," the former Briitsh paratrooper accused of two murders and five attempted murders on Bloody Sunday, was adjourned when it came before Derry Magistrate's Court for the first time.
"Soldier F" was not present for the eight minute hearing.
The Public Prosecution Service (PPS) told the court committal papers had been served in mid-August and from their perspective the case was "ready to proceed." Requesting an adjournment, Mark Mulholland QC, barrister for "Soldier F," said the extensive papers were still being considered. He said the interim committal proceedings would allow for evidence and witnesses to be called. Upwards of 30 members of the Bloody Sunday families were in the court's public gallery for the hearing, including relatives of James Wray and William McKinney.

Andrew Allen killing 'unlawful'
The inquest into a Derry man shot dead in a house in Buncrana seven years earlier recorded a verdict of "unlawful killing." Andrew Allen was shot dead at Links View, Lisfannon in February 2012. The killing was claimed by the so-called Republican Action Against Drugs (RAAD) who claimed the 24-year-old was involved in drug dealing, an accusation which was strenuously denied by his family.

Sharp increase in heroin/cocaine use
New statistics revealed the PSNI seized more hard drugs in Derry than at any time in the previous seven years.
In an effort to counter the problem of drug dealing in the city, a more pro-active approach was adopted by the police.
A PSNI report showed year-on-year rises in Class A drug seizures, which have increased from 29 in 2012/13 to 143 in 2018/19.
The emergence of heroin amongst PSNI drugs seizures since 2015/16 was a concerning feature for local drug addiction charities.
From 2012/13 to 2014/15, there were no heroin seizures in Derry but two seizure incidents occurred in 2015/16 and it peaked at eight in 2017/18.
The most commonly seized class A drug was cocaine. In 2012/13 police recorded 11 seizures of cocaine, in the past year that jumped to 112 seizures.
Class B drugs shot up from 296 total seizures in 2012/13 to 410 in the past year. Similarly, class C drugs fell below 30 in 2012/13 but over 100 seizures were made in each of the last two years.

Anderson launches Irish unity report in Brussels
Sinn Féin MEP Martina Anderson launched  an independent legal report on Irish reunification at the European Parliament in Brussels.
Ms Anderson said the report, “The EU and Irish Unity: Planning and Preparing for Constitutional Change in Ireland”  by Professor Colin Harvey of Queen's University Belfast, Barrister Mark Bassett, offered  an agreed and democratic path back to the EU through a united Ireland.
Ms Anderson said:  “This report, commissioned by GUE/NGL and authored by human rights law professor Colin Harvey and barrister Marc Bassett, sets out the pathway to Irish unity contained in the Good Friday Agreement and what the EU can do to support and secure it.”

Derry man guilty of toddler's manslaughter
The mother of three-year-old Kayden McGuinness said she hoped his killer “rots in jail.”
Speaking outside Derry Crown Court after 25-years-old Liam Whoriskey was found guilty of the child's manslaughter, Erin McLaughlin, said it had been “a very, very difficult time,”
She said no one could know how it felt to lose a child in that way and that she was “happy” with the verdict.
Following an 18-day long trial and after just one hour and 20 minutes of deliberations, the jury of six men and five women also found Whoriskey unanimously guilty of inflicting child cruelty on Kayden.
There was uproar in the courtroom when the jury foreman announced the two guilty verdicts.
Kayden's mother, together with members of her family, were in the packed public gallery alongside members of Whoriskey's family.
Police reinforcements were also present in the courtroom when the jurors' verdicts were announced.
People in the public gallery also shouted "thank you" to the jurors and Whoriskey was also verbally abused as he was taken from the dock to the cells below.

'We weren't waiting to get married'
Two young Derry women who married across the border during the summer said that while the implementation of same-sex marriage legislation was welcome, they were never going to wait for the law to catch up with them or their plans to wed.
Creggan couple, Danielle Doherty and Emma Bradley, couldn't get married in Derry so made sure their wedding pictures reflected the love of their native city.
Emma said: “We weren't interested if it wasn't a marriage. I thought why should other people be allowed to marry if they are in love? Why are we different?”