"Why in God's name does it take the death of a 29-year-old woman with her whole life in front of her to get to this point?" - FatherMartin Magill speaking at the funeral service for Lyra McKee in St Anne's Cathedral where mourners included President Michael D Higgins, Taoiseach Leo Veradkar and British Prime Minister Teresa May 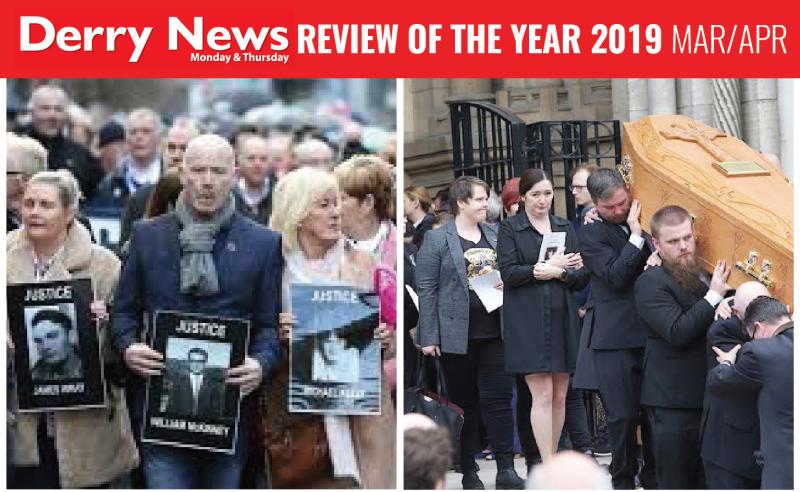 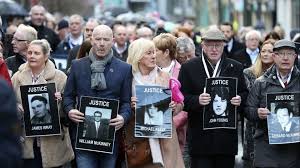 Bloody Sunday families vow to fight on for justice
The families of those killed on Bloody Sunday vowed to continue their quest for justice after it was confirmed only one British paratrooper would face murder charges.
The Director Public Prosecution informed the families that Soldier F would be charged with the murders of James Wray and William McKinney, two of those who lost their lives, and that he would face prosecution for the attempted murders of Patrick O'Donnell, Joseph Friel, Joe Mahon and Michael Quinn, four of the 14 injured.
Following the announcement, the families and the surviving injured gathered in the city's Guildhall for a press conference.
Following a minute's silence, John Kelly, whose 17-years-old brother Michael was one of those shot dead, said: “I was going to start by saying 'good morning,' but it is not.
“We have been denied our human rights again. We have walked a long way since our fathers and brothers were killed. All of the parents of the deceased are now dead. Bloody Sunday created legacy that prolonged a conflict.”

Pot holes causing havoc for drivers
Drivers in Derry expressed anger about pot holes which had “wrecked” their vehicles.
Members of the public voiced their concerns about pot holes the size of “craters” on the Northland Road and Glengalliagh Road.
One said the pot hole on the Northland Road was like the “Grand Canyon” and there would soon be helicopter tours over it.

Lifetime achievement award for Civil Rights Movement co-founder
A local historian, author and co-founder of the 1967 Civil Rights Movement was presented with a Lifetime Achievement Award.
Fionnbarra O'Dochartaigh was presented with the accolade at a ceremony in the Guildhall organised by the Civil Rights '68 Commemoration Committee.
Mr O'Dochartaigh was one of three key organisers of the 5 October 1968 march which was attacked by the RUC. Speaking after receiving his award, Mr O'Dochartaigh said he was “proud” to receive the honour but stressed he accepted it on behalf of his family and other local Civil Rights campaigners who had made an impact.

Protestors disrupt Council meeting to demand action against cuts
A new activist group staged a protest in the Guildhall during a meeting of Derry City and Strabane District Council to demand action against cuts which they said were "destroying lives" in Derry.
The group, Action Against Cuts, caused the final meeting before the upcoming local government elections to be suspended for a period of time.
More than 50 members of the group took part the peaceful protest against welfare reform.
The protestors left the public gallery shortly after proceedings began. Some donned masks of the actor, Dave Jones, who played the titular in the film, "I, Daniel Blake."

Sailor finds first love after 50 years
A sailor searching for his first love finally got to hear the Derry woman's voice again 50 years later with a little help from the Derry News.
John Evans (70), a former sailor with the Royal Navy, had shared with us the heart-warming tale of finding his first love here in the city when he was just 17.
While stationed in the city in the 1960s, he met and fell in love with teenager, Noeleen Hutchinson, from the Waterside.
The couple dated for five years "on and off" before it came to an end. However, John told the Derry News "Noeleen has never left my mind since were 17."
After the story was published, we were contact by Noeleen's cousin, Carol Power, who said she had spoken to her on the phone and told her John was looking to make contact.
Noeleen agreed to speak to John over the phone.
Speaking to the Derry News, she said it was nice to hear from an "old friend" but that the romantic spark of their youth would not be rekindled, stating he was happily married for 49 years.
John said: "It was lovely speaking to her again, she is well. At least, I was able to catch up up with her thanks to you." 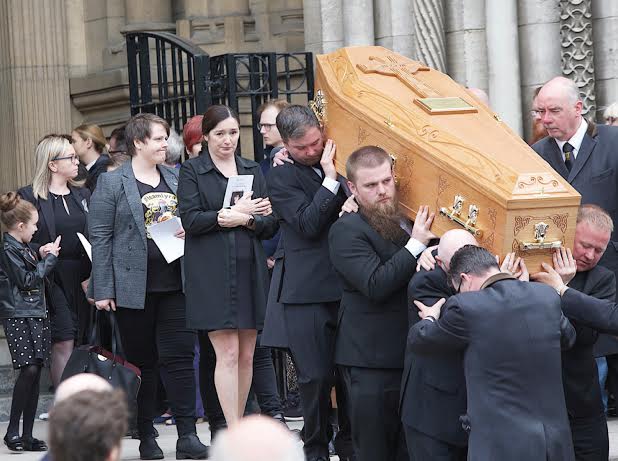 Anger and sadness at death of Lyra McKee
There was widespread sadness and anger after a young journalist was shot dead in the Creggan area of Derry.
Lyra McKee, originally from Belfast but who had been living in Derry with her partner, was hit by a bullet fired at members of the PSNI during rioting in the Fanad Drive area of Creggan.
The killing was claimed by the New IRA through a statement issued by the republican group, Saoradh.
A spokesperson said the 29-year-old was killed "accidentally."
The statement added: "This outcome is heartbreaking and we extend our sincerest sympathy to the family, friends and loved ones of the deceased."
Launching a murder investigation, PSNI Detective Superintendent Jason Murphy said: "There is a real sense that what happened to Lyra marked a sea change. And I want people to have confidence to come forward to help us.
"The individuals responsible for Lyra's murder continue to hide in the shadows, they attempt to justify their actions to eac other. They have shown no courage to offer any explanation to Lyra's family directly."
As part of the investigation, the PSNI released CCTV footage of the gunman.
Hundreds attended vigils held close to the spot where Lyra was killed and in Guildhall Square. Among those present at the Creggan vigil were leaders of the main political parties in the North, including the DUP's Arlene Foster.
Speaking at Lyra's funeral service in St Anne's Cathedral in Belfast, Fr Martin Magill received a standing ovation after he said:
"Why in God's name does it take the death of a 29-year-old woman with her whole life in front of her to get to this point?"
Irish President Michael D Higgins, Taoiseach Leo Varadkar and then British Prime Minister Theresa May were among those in attendance.

Lucky escape in arson attack on home
The son of a pensioner whose home was extensively damaged in an arson in the Shantallow area of the city said his mother seeking alternative accommodation with the Northern Ireland Housing Executive.
The woman's first action was to alert her neighbours after she discovered the back of her home at Greenhaw Avenue (off Racecourse Road) had been set alight.
Police confirmed the source of the fire came from bins that were set alight at the rear of the bungalow spreading flames that ifnited an oil tank which, in turn, spread through the entire property.

Anger at school closure plans
Parents expressed anger and frustration after it emerged the Education Authority (EA)planned to close the only integrated primary school on Derry's cityside.
The EA confirmed it was proposing to close Groarty Primary Integrated Primary School on Coshquin Road at the end of August next year (2020).
At the time, the school had an enrolment of 22 pupils, comprised of Catholic and Protestant children from both the Waterside and cityside.

Youth conference cancelled after threat
Long Tower Youth Club cancelled an event to be held in the city's Guildhall following notification from republican group Saoradh that they would stage a protest at it.
The event, which stated that it would involve representatives from the PSNI, local political representatives, “ex-combatants” and community workers, drew criticism at the anticipated presence of police. In a statement, Long Tower Youth Club said: "This was never about going into a room and the police talking down to young people.
“It was about having the hard conversations and meaningful dialogue so that our members can take the journey of developing a community where they can develop a deeper understanding of the roles they play within the community."
In a statement, Saoradh said: "We understand the need and desire of young people within our communities to engage in peer related conferences, however, parents and youths involved with Long Tower Youth Club expressed particular concern to Saoradh in regards to the presence of Crown Forces."