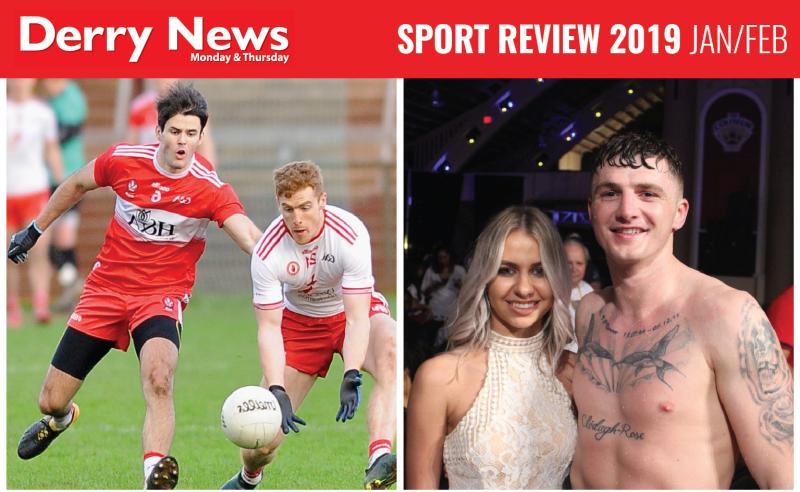 The year started off positively for Darren McCauley, who was not only a target for Derry City manager Declan Devine, but he was also named the winner of the Derry News Sports Personality of the Year award.
After weeks of voting, McCauley emerged top, seeing off Michael McCrudden and Ben McCarron who had also reached the final three. McCauley, who joined Inverness Caledonian Thistle, was the clear winner for the Derry public after thousands of votes.
One player who was joining Derry City was young Scottish defender Josh Kerr, who came to the Brandywell as Devine continued to build his squad for the upcoming season. Derry also announced the acquisitions of Patrick McClean, David Parkhouse (on loan) and Ciaron Harkin as the squad began to take shape.
Meanwhile, things were not going well for Institute as they fell to successive defeats in January, with the Brandywell defeat to Glentoran notable for a crazy goal scored by Glenas goalkeeper Elliott Morris, on his 723rd appearance for the club.

So close for Derry
Tyrone were made to work hard by Derry before clinching a 0-14 to 1-8 victory in the McKenna Cup semi-final at the Athletic Grounds.
Derry led by three in the first half before Tyrone drew level at half-time and Patrick Coney's goal then gave the Oak Leafers a two-point lead early in the second half.
But five late points by substitute Peter Harte helped set up Tyrone's final appearance against Armagh.
Elsewhere, Lumen Christi student Aela Stewart was the talk of the school as she became just one of 12 girls selected to the Northern Ireland netball squad for the upcoming European Championships. Aela and her team mates were set to face England, Wales, Scotland and the United Arab Emirates in the tournament in Huddersfield which was set to take place in March.

Before Derry City's big kick off against UCD at the Brandywell, Declan Devine finalised his squad with four significant signings in the form of Darren Cole, Gerardo Bruna, Eoghan Stokes and Michael McCrudden.
City kicked off life with a brilliant 3-0 win over UCD in front of a packed Brandywell, with Parkhouse opening the scoring before two goals from Stokes. City returned two weeks later to defeat Waterford 3-2 with Ciaron Harkin scoring as City maintained their 100% home record.
There was disappointment for Institute however as manager Paddy McLaughlin, having lit up the Premier Division with his 'Stute-alona' football, became manager of Belfast side Cliftonville. McLaughlin was in charge of 'Stute for 20 months and not only led them to the top flight, but he made them one of the most eye-catching teams in the division, with probably the smallest budget in the league.
In boxing, Connor Coyle made it 9-0 as a professional against Travis Scott. The slick puncher looked as if he’d never been away as he controlled the fight from the first bell with two of the State of Florida judges awarding him a lop-sided 80-70 decision.
The other ringside judge gave Coyle a 79-71 points victory, somehow awarding Scott a round despite the Galliagh man’s undoubted superiority over the duration of the eight rounds.
Scott twice hit the canvas in the third in an impressive 10-7 round for Coyle and he never looked in danger.