“The attack was totally indiscrimate and we cannot allow these criminal elements to try to exert any kind of coercive control over our people” - Mary Hamilton, chairperson of the Derry and Strabane Community Safety Partnership, condemning the bomb attack outside Bishop Street courthouse. 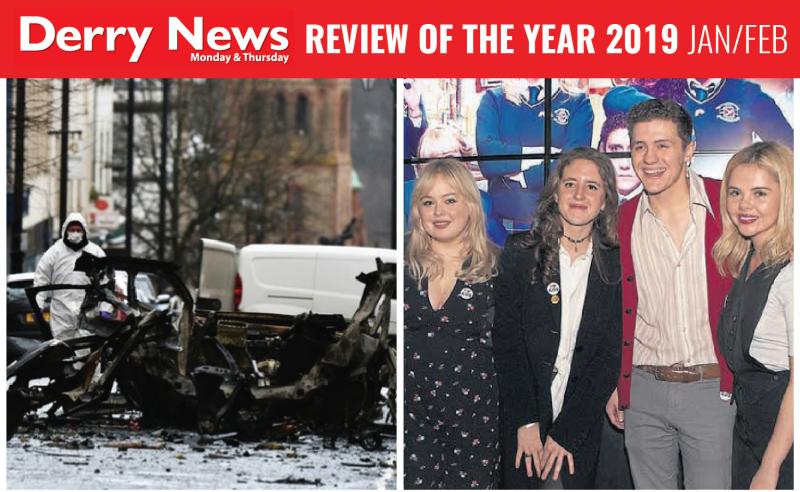 Car bomb explodes outside courthouse
Mayor of Derry City and Strabane District Council, SDLP Councillor John Boyle, led strong condemnation of a city centre bomb attack and a number of van hijackings over a 48-hour period in the city.
No one was injured when a car bomb exploded outside Derry's courthouse on Shipquay Street.
The device exploded at 8.10pm on Saturday night, 19 January.
Police released CCTV footage of a group of teenagers walking past the car shortly before the bomb went off.
There was disruption in a number of areas in the city following the hijacking of a number of vehicles. 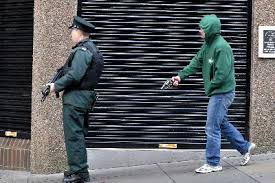 Reconstruction staged of city centre shooting
The PSNI staged a reconstruction of the shooting dead of a police officer in the Derry city centre in the early 1990s.
The event was staged by the Legacy Investigations Branch investigating the killing of Constable Michael Ferguson on Shipquay Street on 23 January, 1993.

Derry man catches first salmon of the year
The first salmon of 2019 in Ireland was caught and released on Lackagh River, between Creeslough and Carrigart, by a Derry man
According to Inland Fisheries Ireland, Michael McCann, of Templeard, landed the fish in the Garden Pool on the Donegal river at 9.25am on New Year's Day.
Michael was one of 22 anglers fishing the river at the time.
The salmon, which weighed approximately five pounds, was released back into the river.

Outrage at vandal attack
Young people in the Creggan area of Derry were called on to rspect community buildings in the district.
The call came from Sinn Fein reprsentative Tina Burke after extensive damage wasa caused to the Old Library Trust building on Central Drive. 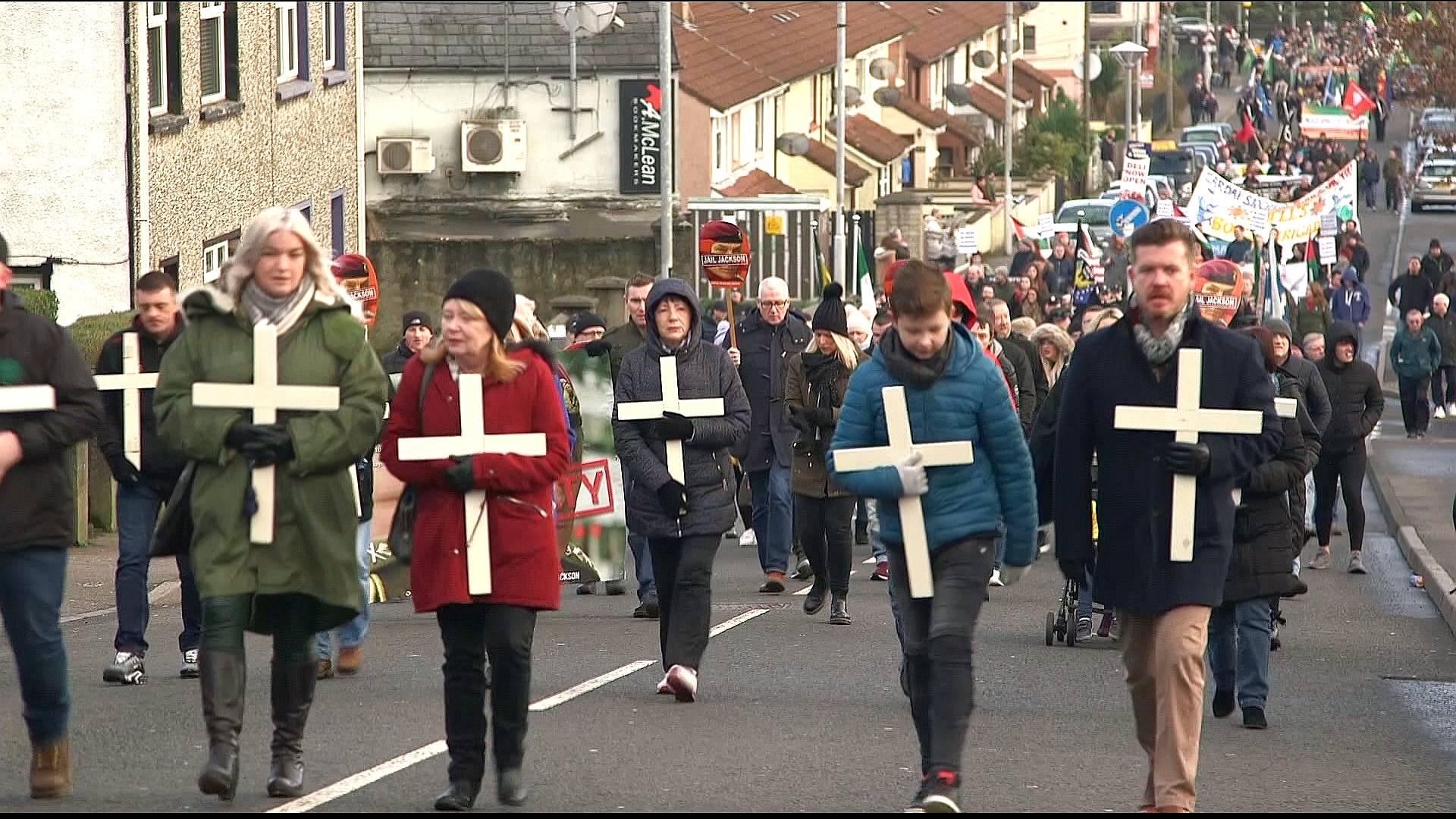 Bloody Sunday rally calls for prosecutions
Several thousand people took part in the annual Bloody Sunday march in the city.
The march – marking the 47th anniversary of the killings – came just days after it was revealed that one of the soldiers being considered for prosecution by the Public Prosecution Service (PPS) was understood to have died.
The parade was the culmination of a week-long series of commemorative events.

Mother implores health chief to action suicide prevention strategy
A Derry mother implored the Permanent Secretary of State at the Department of Health, Richard Pengally, to action the Protect Life 2 Strategy to prevent further loss of life to suicide.Lorraine Curran lost her son, Mark McCann, in 2005, just two years before his close friend, Conor Carlyle, also took his own life.
Also, the brother of a Derry man whose body was recovered from the River Foyle after an eight week search, pleaded with those suffering from mental health issues to speak out before it was too late.
Michael McGinley (27) was last seen by his famiily on 21 January 2018. His remains were recovered from the river on 23 March.
Speaking on the first anniversary of his death, his brother, Sam, said mental health services in the city needed to be invested in much more.

Crisis Intervention Centre Service commences
A long-awaited crisis intervention centre commenced in Derry aimed at providing a “safe space” for those at risk of suicide or self-harm.
It was confirmed that a 12-month pilot scheme had started and would be run by extern NI from the Holywell Building on Bishop Street.
Bereaved local families, activists and organisations had been supportive of theplans for such a facility.
Operating hours were from 8.00pm on Thursdays to 8.00am on Sundays.
A spokesperson for Derry City and Strabane District Council said the necessary funding had been committed from partners to establish the Pilot Community Crisis Intervention Service (CCIS) for the Council area and Extern had been awarded the contract to provide the service.

Police welcome jail sentence hand down to Derry drug dealer
Police welcomed the jail sentence handed down to a Derry drug dealer at the city's Crown Court.
The 31-year-old, who was granted anonymity and had 15 previous convictions, eight of them for drugs offences, admitted 27 charges relating to possessing and supplying drugs, including heroin, cocaine, ecstasy, oxycadone and MDMA, as well as fentanyl, Xanax, cannabis and diazapam.
The court heard he was still under a death threat issued against him by dissident republican paramilities two years previous.
The court heard the charges were brought as a result of four different searches at properties lived in by the defendant.
After jailing him for three years, Judge Philip Babington ordered that £3,800 found in a freezer at one of the properties searched be shared between the HURT, Cruse and Foyle Search and Rescue charities.

'Pope Mobile' handed over to Derry charity
A Derry charity was blessed with the holiest of gifts when it was presented with a “Pope Mobile” used by Pope Francis during his visit to Ireland the previous summer.
Foyle Search and Rescue received the blue Skoda Rapid which drove the Holy See around Dublin.
Fr Tim Bartlett, secretary general of the World Meeting of Families, who was responsible with the Catholic Bishops of Ireland with organising the Pope's visit, was present for its delivery at the charity's headquarters at Prehen.
Fr Bartlett said it was the wish of Pope Francis that the cars he travelled in should be donated to charity and that one should be given to a charity in the North.
Pat Carlin, vice-chairman of Foyle Search and Rescue, said the car would primarily be used for educational purposes and for fundraisers but would be on the road as a support vehicle when it was needed.

Sad passing of Derry's 'Singing Laundryman'
Tributes were paid to one of Derry's most renowned singers who passed away at the age of 92.
William Loughlin - affectionately known as the “Singing Laundryman” - had an exceptional bass voice and performed to great acclaim across the world.
He first appeared in concert in 1945 and made his debut on the BBC two years later.
Paying tribute to her friend and co-performer, Maureen Hegarty told the Derry News: “Joe Locke often remarked how much he liked Willie, probably because he wasn't any competition to him. Joe was a tenor and William had a very rich bass voice.”

Feargal Sharkey back in Derry
Former Undertones frontman Feargal Sharkey returned to his home town to deliver the opening address at a major environment conference.
“The Gathering” took plae in St Columb's Park House in the Waterside.
The former singer has emerged as a leading environmental campaigner, particularly in relation to clean water and protection of iconic chalk streams in southern England, where he now lives.

Green light for 262 new homes
Over 300 new homes were given the go-ahead by the planning committee of Derry City and Strabane District Council.
The majority of the new homes – 262 – were to be located north of Skeoge Link Road in the Galliagh area of the city.
The development would include 97 apartments, 166 two storey dwellings and associated landscaping, open space, parking and roads.
Planners also granted planning permission for additional apartments at Patrick Street in the city centre.

Potentially deadly bacteria found in Derry police station
The custody suite at Strand Road PSNI Station was closed because of the detection of a strain of Legionella, the bacteria that causes the potentially fatal Legionnaires disease.
Detainees were regularly ferried to other police stations for questioning in a move that a Derry lawyer said had become “intolerable” for both the legal profession and those placed under arrest.
Solicitor Richard Campbell told the Derry News the situation meant none of the city's police stations were operational in terms of questioning and detaining suspects.
Mr Campbell also said the ongoing closure of the cell block at Strand Road placed additional pressure on the public purse.

Couples openly having sex in Derry street
Residents of Ferguson Street in Derry said there had been a surge in anti-social behaviour in the area including couples openly engaging in sexual acts in the street.
A number of residents reported they also had their cars smashed up, a door kicked in and witnessed people urinating right outside their front doors.
One woman said couples having sex in the street had become “a regular occurrence.”
The woman added: “My mother could see them basically right outside her door. She saw the girl's bare backside and it was pouring with rain, they have no shame.”

Derry girl wins dream trip to China
A talented young Derry girl won a trip of a lifetime to China after scooping first prize in a Mandarin speaking competition.
Thorhill College pupil, Eve Flood, only took up learning the language a year previous.
The Year 14 pupil travelled to London to compete for the beginners' prize in the HSBC British Mandarin Speaking Competition which was held at the British Museum.
Speaking about her win, she said: “It hasn't really sunk in yet – I don't feel any different. My parents think it's fantastic that I've won.