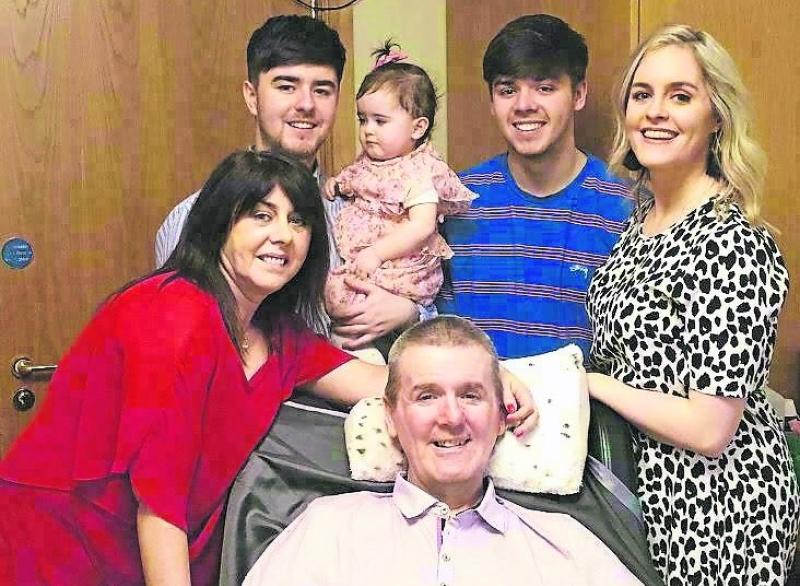 My husband Paul was diagnosed with Motor Neurone Disease on July 27, 2012.
Paul was 47. I had never heard of the disease before that day nor knew anything about it. Paul had a very busy job and kept himself very active. He was a painter and decorator.
Paul had never been off work sick or never had to attend any hospital appointments. It all seemed to happen so quickly when he had a fall and went to casualty for what we both thought would just be a few stitches, to be told in three weeks later of his diagnosis was so devastating for us both.

‘Then the angels came’
One week later Paul and I met with the Motor Neurone Nurse who explained how the illness would affect Paul, our family and home life. I remember that day both of us walking back from hospital, sitting on the benches at Foyle Marina and thinking “I feel like I am outside looking in at everybody getting on with their daily lives”. How were Paul and I going to cope and deal with this devastating disease? Then the angels came.
We were introduced to Foyle Hospice in January 2014. Paul started going to the day hospice and almost immediately life seemed to become so much easier to cope with. I was able to go shopping, go out with my wonderful friends and not have to worry if Paul was okay.
Each and every individual person who worked in the Day Hospice, Inpatient Unit or played a part in the day to day running of Foyle Hospice, gave us so much. That’s why I call them angels and I don’t say that lightly.

Live life to the full
We experienced so much happiness, laughter and opportunities to make wonderful and precious memories as a family such as our trip to Lourdes. Myself, Paul and our family went on many weekends away where the hospice gave us advice on what to do to make those trips so much easier. It gave us the determination to live life to the full.
Paul loved Manchester United Football Club. On many occasions we went over as a family. However, when Paul became ill he never thought he would be able to visit Old Trafford again. Thanks to his sister Claire and the guidance of the hospice team he was able to visit twice more. Paul met the team, watched them train, attended matches and had a tour of the stadium. Watching his happiness and delight was precious and gave us great memories to hold on to always.
‘Amazing people and friends’
Paul also spent periods of time in the Inpatient Unit for respite. Our family was able to get away from everything clinical and get a break to recharge ourselves, although Paul was never far from our thoughts. We were confident he was happy and really well looked after. In fact, he was spoiled by both staff in Day Hospice and Inpatient Unit. Paul would be smiling from ear to ear.
I also spent many days and nights in the Day Hospice and Inpatient Unit. The warmth, care and the welcome I received was just amazing. I felt so comfortable and made so many wonderful and amazing friends. I used to say, “I feel as if I’m in a hotel with no bill to pay on the way out”.
Paul said on several occasions he hated this disease but if he could take one good thing from it was the amazing people he met and the friends he made. I second that, it was Foyle Hospice who made that possible.