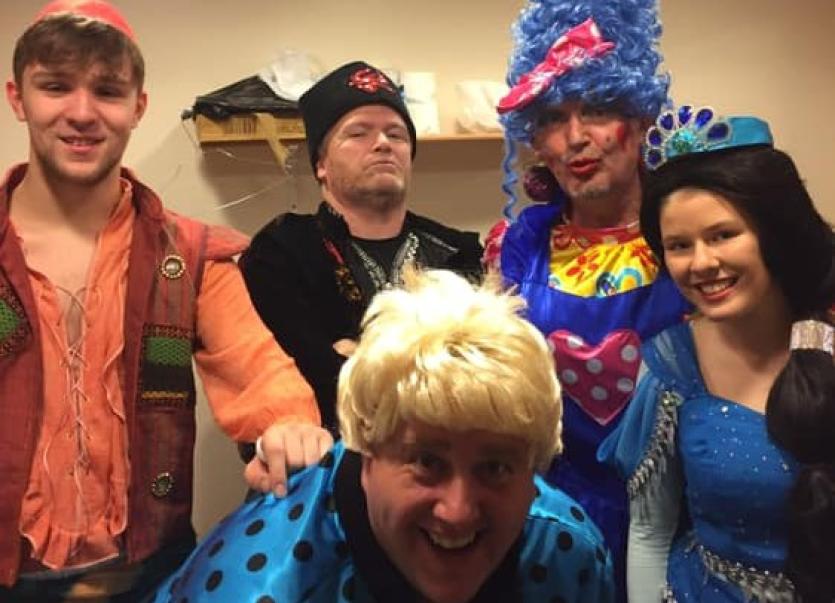 The Grove Theatre Group are back with their traditional style panto combining a blend of song, dance and humour, featuring a local talented cast of all ages.
The wicked Abanazer is seeking the magic lamp that contains the all-powerful Genie, so he can rule the world, and is just steps away from succeeding when a band of wannabe heroes in the form of local lad, Aladdin; his brother Wishee Washee and, of course, Widow Twankey are ready to stop him and save the day.
With a magic carpet, an Arabian Sultan, a couple of hapless genies and a beautiful princess, this is a fantastic tale to entertain those of all ages. Featuring many local stars such as Willie Barrett and Paddy Taylor in the roles of Widow Twankey and Wishee Washee, this show promises to be one of the funniest ever produced by the group.
Aladdin is played by the talented Aodhan Kehoe and Cathal Jackson sharing the part, while the role of Princess Jasmine is shared by Roisin Doyle, Ellie-Jo Ferguson and Maria Donnelly.
Paul Doherty takes on the role of the evil Abanazer assisted by Hi-Yi, his sneaky assistant, played by Conaill Long and Conan Harkin.
The Genie and Apprentice are played by Jessica Ogilvie, Robyn Whiteside, Daniel McCafferty and Marty McDevitt. The Slave of the Ring is performed by Jenni O’Hagan and Katrina Robinson sharing the role. This production is directed by Roderick Canning, produced by Martin Mullan and choreography is by Stephen Carlin.
The junior cast direction is by Paul Doherty and Soarla Boyle. This year the very talented musical team includes Charlie Logue on keyboards with Una Dunne taking on the role of musical director for the first time.
The Aladdin pantomime will be the group’s sixth major production in just over two years.
With recent box office successes such as Grease in 2018, and Hairspray in 2019, the group continues to grow and go from strength to strength.
Far from stopping there, the group have just announced dates for their production of Disney’s High School Musical for May next year in the Millennium Forum.
Now in its 40th year, the Grove continues to provide high quality events and productions and gives thousands of children and young adults the opportunity to learn more about the art of theatre and performance.
Go and join in this magical story from 6th December to 19 December next in the Waterside Theatre.
The show starts nightly at 7.30pm and 3.00pm on Saturdays and Sundays. School matinees are also available during the week at 10.00am.
Group prices are available from the box office – to book telephone 028 71314000.