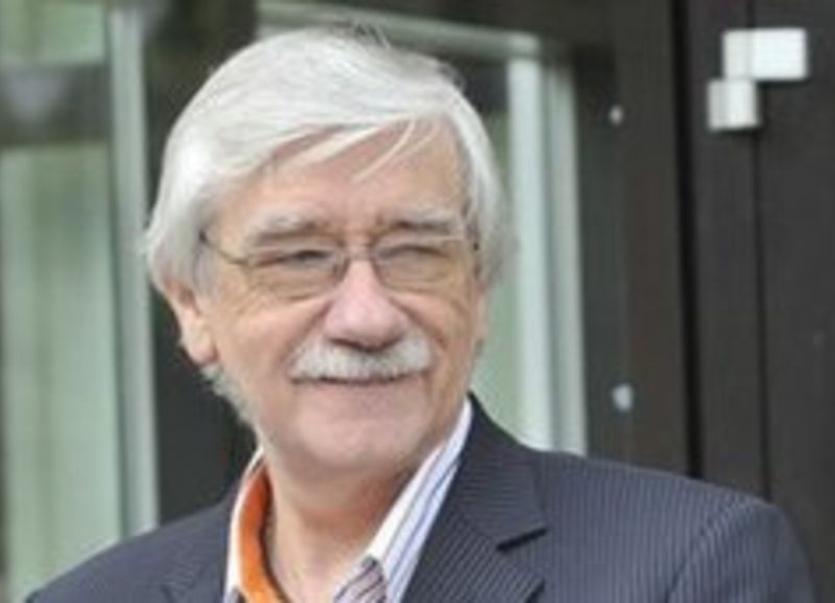 Not all Irish republicans support Sinn Féin’s stance on abortion and this was clear at the entrance to the Millennium Forum.

Largely ignored and with heavy security preventing any unwelcome visitors, the protesters were criticised for displaying the images close to where young children were arriving for classes in speech and drama. Inside, activities proceeded and the posters failed to detract from the greater number which proclaimed that it is the time for Irish Unity.

The evidence was there to support the assertion by a local Sinn Féin acquaintance that the party has an army of activists. Many were on hand to welcome, corral and guide arrivals towards the youthful lap-top operators who recorded arrival and issued bi-lingual security badges. It was all completed with the equivalence of assembly-line efficiency. To suggest comparison with military precision, may be misconstrued.

Amidst the plentiful republican merchandise of badges, books and T-Shirts alongside the promotional displays by exhibitors, branded pens, mugs and post-it notes which are a feature of party conferences, there were signs advertising the forthcoming seasonal pantomime.

This event was no pantomime no matter how much political opponents may wish it to appear as such; rather it bore all the hallmarks of a carefully organised and choreographed production not least in the image management of the main players.

In response to complimentary comments on the appearance of her hairstyle by Michelle Gildernew at the 'fringe' event, Sinn Féin’s Northern leader and Vice- President remarked that she “had it done” prior to the morning event by “Derry Wans.”

Other party leaders who have been known to comment on its blonde appearance, should maybe take note.

Like the results of the non-event leadership election involving Michelle O’Neill and John O’Dowd, it is not recorded if Gerry Adams, in attendance and sporting a longer hairstyle than previously, also had the attention of the “Derry Wans.”

The former President has many secrets it is claimed. This can be added to the collection.

With time approaching for live coverage on television, delegates and visitors were ushered into the auditorium to fill seats from the front and provide an audience for the many speakers about to have their moment on stage.

Too numerous to mention individually, the selection contained MLAs, MPs, MEPs, TDs and other representatives from North and South. The most enthusiastic receptions were reserved for John O’Dowd MLA, a very fashionably dressed Elisha McCallion MP and equally sartorially attired Lord Mayor of Belfast, John Finucane.

All three, with others, carry the hopes of the party in the forthcoming Westminster elections no doubt aiming to reverse recent electoral setbacks.

Like graduates who line-up at the local Summer Graduation, the numerous speakers, having similarly progressed through whatever tests apply, awaited their turn to come to the lectern.

Behind them, a steady inter-change of seats occurred as various individuals appeared, vacated and then re-appeared at the tables. All the parties do this at their Conferences to give exposure to party hopefuls and grandees but it also implies a need to indulge hierarchies and massage egos.

Perhaps, this is to judge too harshly and it is to show shared leadership and accountability for the success and welfare of the party. It will be interesting to see if the present incumbents occupy the seats next year.

With speakers addressing the delegates and visitors solely in English, Gaelic or a combination of the two, numerous topics received an airing. In spite of the fact that, in all probability, I had ancestors with Donegal and Scottish connections who spoke Gaelic or Gallic, I was put at somewhat of a disadvantage by Declan Kearney and others who spoke entirely in Gaelic.

Interestingly, this was not the case for many others in the audience, who, to judge from their enthusiastic applause, had full understanding. Happily, however, my linguistic limitations do not prevent my seeing culture through the eyes of others and I envy those who can master another language.

As the current political paralysis at Stormont indicates, this does not always correlate with productive communication although encouraging movement with regard to the impasse were alluded to more than once.

With many speakers addressing the Conference without notes and relying on the teleprompter in the orchestra pit, speeches were clearly prepared and approved well in advance to ensure they are ideologically ‘on message’ with little debate or dissension anticipated. They still retain interest for the observer as passionate and animated comments reflecting the views of Sinn Féin activists were aired on high levels of ‘ industrial -level ‘drug-related crime and drug addiction in rural areas and towns like Dundalk and Drogheda, trafficking, extortion, inadequate policing where people are afraid to walk streets at night, climate change, shortage of housing, high rents, evictions, homelessness affecting large numbers of children, inadequate provision in healthcare with high costs and lengthy waiting lists, post-code inequalities, growing dysfunction in communities, educational underachievement, gender equality, perceived imbalances in taxation which favours large corporations and ‘corporate cartels’ and the need for the full application of the Stormont House Agreement in respect of full disclosure by the British government of its actions in Northern Ireland.

In regard to the portrayal of life in the Republic of Ireland, the impression created is much detached from that created by a visit to the current affluence of Grafton Street and adjoining areas or Dublin 4. It is not yet the ‘promised land.’

Unsurprisingly, with four forthcoming bye-elections in the Republic of Ireland and a General Election not far away, blame was heaped, for a receptive audience, on Sinn Fein’s main opponents in the South, Fine Gael and Fianna Fáil.

Equally weighted is the credit which Sinn Féin claims for the non-application of British Brexit Leave policy in Northern Ireland and what is sees as the achievement of ‘special case status’. Under pressure for not taking up seats at Westminster, a position which some pragmatic members of Sinn Féin would be willing to alter, Michelle O’Neill MLA emphatically endorsed Sinn Féin’s London abstentionism and success in achieving in Dublin, Brussels and Washington support for the party’s Brexit strategy of no border and no Unionist veto.

This is a claim which many in government in Leinster House would dispute. There are many there who might like to claim some, if not more, credit.

Echoing earlier comments by Conor Murphy MLA and John O’Dowd MLA, the Northern leader, whilst blaming the DUP for present difficulties, seemed to create space for a possible restoration of the Northern Ireland Assembly and a return to power-sharing so that actions to address public pay, a Bill of Rights and blockages to the restoration of an Executive can be removed.

In an optimistic rallying cry to the future, the leader promised delegates that a referendum on Irish Unity is coming; that the foundations of a new Ireland are being laid; that Irish republicanism must seize the moment of a lifetime; and there is a need to stop fighting the battles of the past. There was no sense of irony apparent when making the last remark.

The focus on Irish Unity received greater emphasis, when having made their way through a well-staffed media room, the audience gathered for a fringe event.

Pearse Doherty TD presented a largely unchallenged case querying the accuracy of figures relating to the subvention paid to Northern Ireland by Westminster and why the real figure, in his estimation, could be absorbed by the economy of the Republic of Ireland in the event of re-unification.

I can think of some individuals in government in Dublin who may be more than alarmed at any such proposal at this time. Following a General Election in the Republic of Ireland, this may change if the hopes expressed in the concluding keynote contribution of An Uachtaráin, Sinn Féin Mary Lou MacDonald are realised.

Timed for prime time viewing on RTE, Mary Lou received the mandatory enthusiastic greeting typical at such events. Her call for the release of John Downey was well received.

With the task of drawing together the various threads of the speakers and the over-riding theme of the ArdFheis, she did not disappoint and targeted economic inequality, the ‘cosy club’ of banks, landlords, vulture funds and an accommodating government in Dublin evictions, Health Reforms, Mental Health needs, Childcare and investment in regional infra-structure. Many promises, with little financial detail on the day, were made on behalf of any future Sinn Fein government which, she intimated, could be as part of a coalition. It will be interesting how, if any, other parties respond to this public courtship. Currently, Fine Gael appear unimpressed. It will take more than a hairstyle arranged by ‘Derry wans.’

On constitutional change in Ireland, Mary Lou exhibited the same confidence of other leading representatives. Whilst calling for the restoration of the NI Assembly and indicating a willingness to ‘ do business ‘, she committed the party, in moving away from a call for an immediate Border Poll, to working towards a referendum on Irish Unity in the next five years, called once again for the Dublin government to convene an All-Ireland Forum to prepare for Irish Unity and, though resisting any temptation on this occasion to cite Tiocfaidh ár lá, in a final moment of anticipatory self-praise and measured tub-thumping for Irish republicanism, stated that it always looks to the future, in this case, the achievement of Irish Unity in the next 10 years.

It is a valid aspiration but with Brexit uncertainty and fallout unlikely to end, pending involved and complicated trade agreements, predictions of global recession resulting from economic downturn in China, the as yet unrealised repercussions of AI for employment, the unpredictability of climate change and demographic preferences to add to the many social and economic problems identified at the Ard Fheis, Ireland and Northern Ireland will, in all probability look different to nowadays. The ideologically informed hopes of today, evidenced by all of the parties within their Conference bubble, may prove to be the disappointments of tomorrow.

The continuing anarchical political instability and the determination of the major parties to govern the Good Friday Agreement through leverage rather than consensus and reconciliation will guarantee it.