NW the gateway to UK and EU markets, US investors told 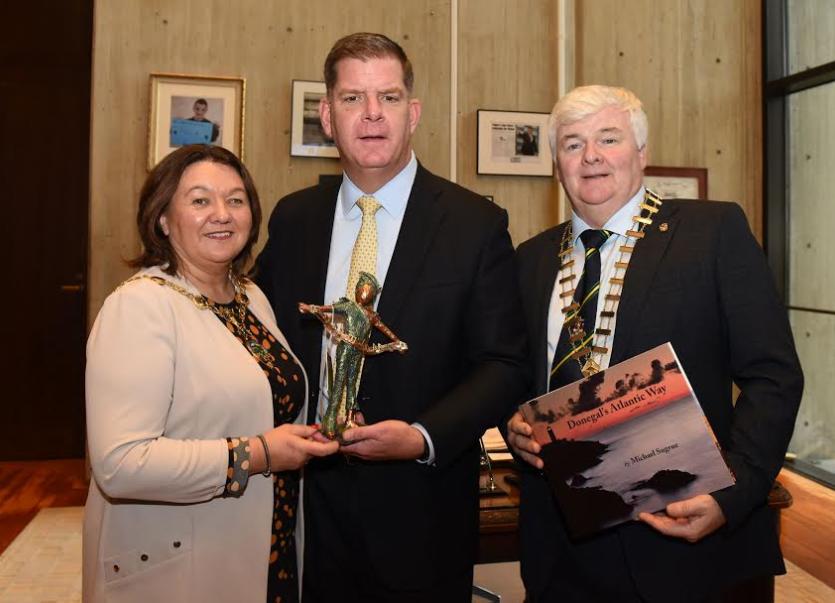 The North West region’s unique strategic cross border location with a foothold in both EU and the UK markets and its pipeline of talent was the key message shared with potential investors in both Philadelphia and Boston last week as part of the Ireland North West trade delegation that travelled to the US.
A number of focused engagements with industry specialists, FDI executives and venture capitalists took place throughout the week in both cities as part of the Trade and Investment mission led jointly by Derry City and Strabane District Council and Donegal County Council, showcasing the compelling investment proposition that the northwest city region has to offer.
Potential investors heard how they could take advantage of the unique combination of benefits that the Northwest region has to offer including an accessible, connected and business friendly gateway region with a compelling vision for greater international impact.
Investors learned that companies and businesses are attracted by a talented and educated workforce, the value balance, the superb quality of life and the supportive business environment.
The delegation also met with the Mayors of Philadelphia and Boston who both outlined their commitment and support for the work being done by the two Councils.
Boston Mayor Marty Walsh spoke about the strong ties he has with the North West and outlined his commitment to build on the positive work being done to promote strong communities and shared prosperity for all. While Philadelphia Mayor Senator Jim Kenney spoke of the honour of hosting the delegation and hearing at first hand about our ambitious growth plans and vowed to continue to work with us to celebrate our connections and build on the existing strong relationship.
Mayor of Derry City and Strabane District Council Cllr Michaela Boyle led the delegation along with An Cathaoirleach of Donegal County Council Cllr Nicholas Crossan. She said the visit was a huge success, not only in raising the profile of the region as an investment location, but in making new contacts and learning about the potential for further business engagement opportunities.
She said: “Access to the investment community and engaging with them on a one-to-one basis allowed us to showcase what the North West region has to offer. Being able to share with them our vision and ambition as well as the practical supports and assistance available to businesses in the region is vital if we are to stimulate growth and investment. There is real value in having face to face engagements if we are serious about building meaningful connections and relationships that will benefit the region.”
An Cathaoirleach fo Donegal County Councill, Nicholas Crossan was also very positive about the visit saying he believed the collaborative approach in promoting the region was key to success.

He said: “ The strength of the region is underpinned by the strong collaborative approach which sees industry, government at both central and local level, and further and higher education institutions from both sides of the border working together to fuel further economic growth and prosperity. This is something that investors value greatly in terms of facilitating ease of access to supports in the region.”

Local businesses from a range of sectors across both Council areas also participated in the mission meeting with potential clients and business partners with a view to increasing sales and expanding their businesses.

Derry based Humanity Cosmetics participated in the mission and brought their high-end male skincare brand of naturally based ingredients to Philadelphia and Boston in an effort to tap into the US market.

Company co-director Christopher Reid said the trade mission was a fantastic opportunity to build on his own research, visit stores and meet potential clients gaining a deeper understanding of what exactly the customer is looking for.

He said it also allowed him and his co-founder partner Gerald Floyd to get an insight into the potential costs associated with exporting and logistics assisting in finalising price points for trading.

Killybegs based MMG Engineering who travelled as part of the delegation felt the trade mission was hugely beneficial in assisting the company to make new business contacts and help develop the company to the next stage. Martin McGuinness said there was a very positive response to the company’s patented Compact Gangway Systems product.

He says the trade mission provided the opportunity to make connections with various industries and allow him to research what demand there is for his product with a view to potentially securing successful contracts in the future.”

The week also saw the official launch of the exciting research project with Harvard Graduate School of Design, exploring how the cross-border northwest city region could potentially be shaped in light of the economic, political and social realities of Brexit. The project was led by Assistant Professor Gareth Doherty in Harvard GSD, who is originally from Carndonagh in Donegal and is expected to be exhibited in the North West region in Spring 2020.

Speaking after the trip, Chief Executive of Derry City and Strabane District Council, John Kelpie said: “This Trade and Investment Mission is part of the ongoing positive work being done by both Councils. We are committed to continuing with the positive work we are doing to drive forward our economy and to maximise the opportunities we have as a cross border gateway to both the UK and EU markets.

“We have longstanding connections with Philadelphia and Boston and these connections transcend economic, cultural and political linkages. The Golden Bridges conference has provided the Northwest region with an important platform in the that region allowing us to reach out, connect with and form meaningful relationships and collaborations with stakeholders in various sectors that have been instrumental in progressing growth and prosperity in the region.”

“This trip has been a great opportunity to showcase our talent, skills and entrepreneurship along with our ICT strengths, well established eco-system and quality of life. There is a strong partnership between local government, education and businesses in the North West City region and this was a key selling point during the trip and I believe that our direct approach of travelling to the US, making those connections and building rapport, really works.”

The trade mission was funded by The Executive Office and the Irish Government.

For more information on the trade mission visit www.irelandNW.com and follow the hashtag #IrelandNW19.