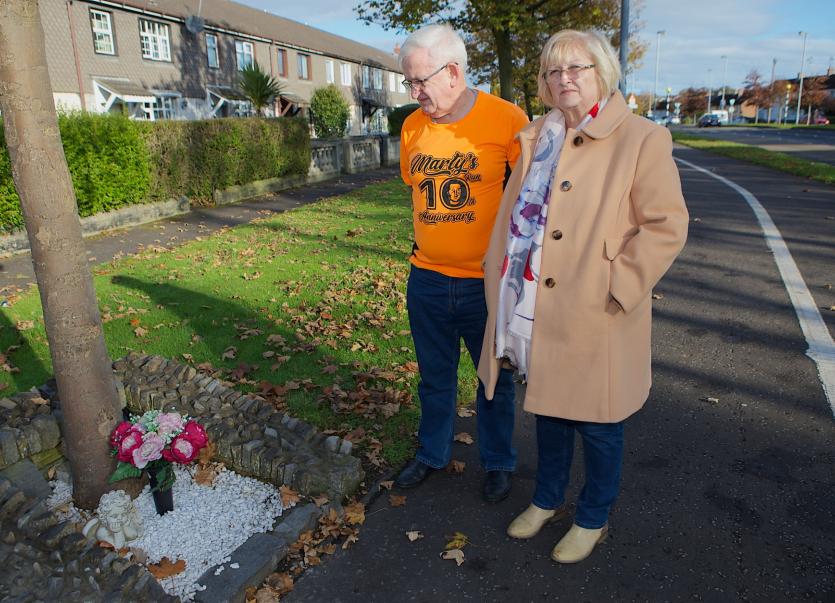 Martin and Elizabeth Gallagher at the memorial on Racecourse Road where their son Martin was killed ten years ago. (Photo - Tom Heaney, nwpresspics)

The parents of a Derry man who was killed ten years ago tonight have voiced support for tougher sentencing in the most serious dangerous driving cases.
Martin ‘Marty’ Gallagher was 25 years old when he was killed in a hit and run collision at Racecourse Road as he walked home after celebrating Derry’s Halloween festival 2009.
The driver, Jonathan Francis McGonagle, was drunk, speeding and had drugs in his system. He was jailed for three years in December 2010 for causing death by dangerous driving and spent another three years on license.
Marty’s parents, Martin and Elizabeth, have had to live with the consequences of the driver’s actions for the rest of their lives. It has also impacted on the lives of his brothers Richard and Ryan, and sisters Michelle and Anne.
This week the Department of Justice launched a public consultation into a Sentencing Review. One of the offences up for debate are those “which may result in death, including causing death by dangerous driving”.
It seeks the public’s views on whether the current maximum sentence of 14 years should be increased to life imprisonment or increased to a higher fixed number of years.
The Department confirmed to the Derry News that a decision can be taken on these legislative changes in the absence of a minister.
The Gallagher family are supportive of life imprisonment being introduced for such offences.
Speaking to the Derry News yesterday, Marty’s father described him as a “great son” who got on with everybody and raised a lot of money for charities through his running.
Martin said his son would’ve been a good footballer and got involved in competitive running when he was 21 or 22-years-old.
On the day Marty was killed, his father was working and didn’t see him before he went into town but said he was joking about with his mother before he left.
Martin and his wife slept on the third floor of the house with Marty and Ryan on the bottom floor. About 3am Ryan burst through the door saying, “he’s dead, he’s dead”, and when they asked who they were left in a state of shock. “The man killed Martin at 1am and then went on to a party,” Mr Gallagher said. 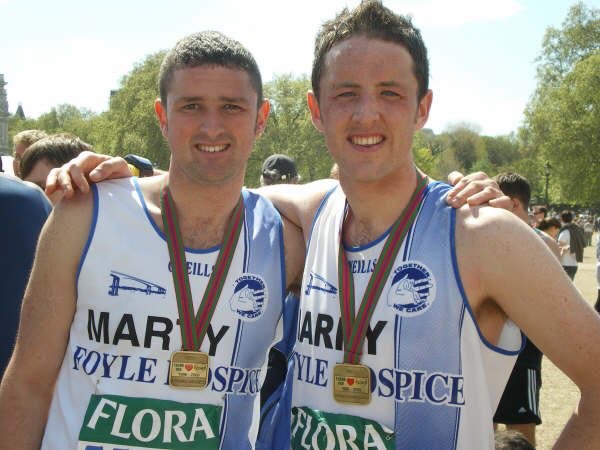 Martin and Elizabeth were initially asked to call to the Racecourse Road to identify him but a PSNI sergeant then said it wouldn’t be possible because it was a crime scene.
The police sergeant, who still keeps in touch with the family and whom Mr Gallagher described as a “good man”, wanted to spare them the trauma of seeing Marty’s injuries.
The following day they were also advised against seeing their son at the morgue but when the coffin was brought home Mr Gallagher said they were in disbelief and it brought “no closure”.
“You’re wondering was that Martin and waiting for him to walk through the door,” he added.
The man responsible for his death appeared in court for the first time on Martin’s birthday, February 2. He was sentenced in December 2010 with police saying it was one of the quicker cases of its kind to pass through the courts.
“First of all we tried for murder and they wouldn’t give it to us,” Martin recalled. “Then we tried for manslaughter and they wouldn’t give us that either, why, I don’t know.
“I think the reason it went through so quick was because the girl testified who was in the back and actually shouted to the driver, ‘Jesus, there’s a fella crossing the road’. Martin was about a foot away from reaching the footpath.
“That person who killed Martin was full of drugs and drink but the police couldn’t say when he took the drugs.
“We were hoping that he would get at least fourteen years. What they’re trying to do now in England, Scotland and Wales is bring in life for life, but they’re not bringing it in in Northern Ireland."
When told the news of proposals that are now on the table in NI to Increase the maximum sentence to life imprisonment for the three serious driving offences resulting in death or grievous bodily injury, Martin was fully supportive, believing it may be the deterrent needed to make drivers take more care.
This would mirror the current maximum sentence available for offences such as manslaughter, rape, shooting or wounding with intent to commit grievous bodily harm.

Two months ago the same man responsible for their son’s death was convicted of a number of driving offences but was given a suspended sentence.
“Ten years later he has never said he was sorry,” Martin stated, “I will never forgive him.”
An emotional Martin said, “it’s like part of our life is gone,” as he implored anyone ever considering drink-driving to think about the suffering of families affected by such tragedies.
“You live from day-to-day for your other children. You might’ve seen the ad on TV about the man living with depression who pulls the mask off at night, you just put a front on for people.
“It gets no easier over ten years, people say it gets easier, it doesn’t, you learn to live with it just that’s it. If you didn’t have a good family and marriage, it would wreck your family.”
And every time he crosses paths with his son’s killer it makes it worse, he added.
Support from the local community has helped to lift the family’s spirits over the years. Last weekend 100 members of Foyle Valley Athletics Club ran the Dublin marathon in memory of Marty.
One of the founding members of the club, Harry McNulty, ran his 61st and final marathon on the day – Marty was a prodigy of Harry’s when he joined Foyle Valley.
“With Marty’s run every year we’ve raised about £30,000 for Derry charities. Over 1,100 people turned out at the start of the month.
“It’s great to see what they thought of Martin and the money going to charity.
“Last year we gave Altnagelvin a bed and it has Martin’s name on it but we try to spread it out.
“The support gives us a lift and it just shows you what people thought of Martin,” Mr Gallagher concluded.

GALLERY: Out & About at the Thirsty Goat, Derry

£75,000 worth of damage was caused to Christ Church on Infirmary Road

Two men who broke into and defacated in Derry Church jailed

'Inadequate' respite provision must be addressed

Get ready for the Big Garden Birdwatch

An image of Bronagh Gallagher will be projected onto the Tower Museum as part of  the  Festival of Light Illuminations . 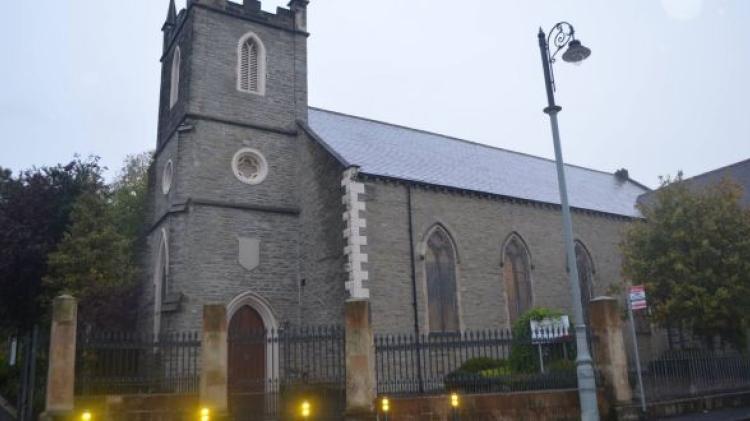 £75,000 worth of damage was caused to Christ Church on Infirmary Road

Two men who broke into and defacated in Derry Church jailed 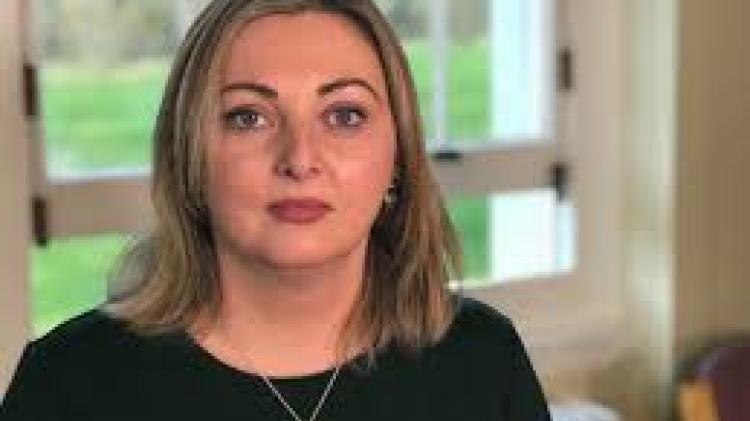 'Inadequate' respite provision must be addressed

Get in touch with the team at DerryNow.com at news@derrynow.com